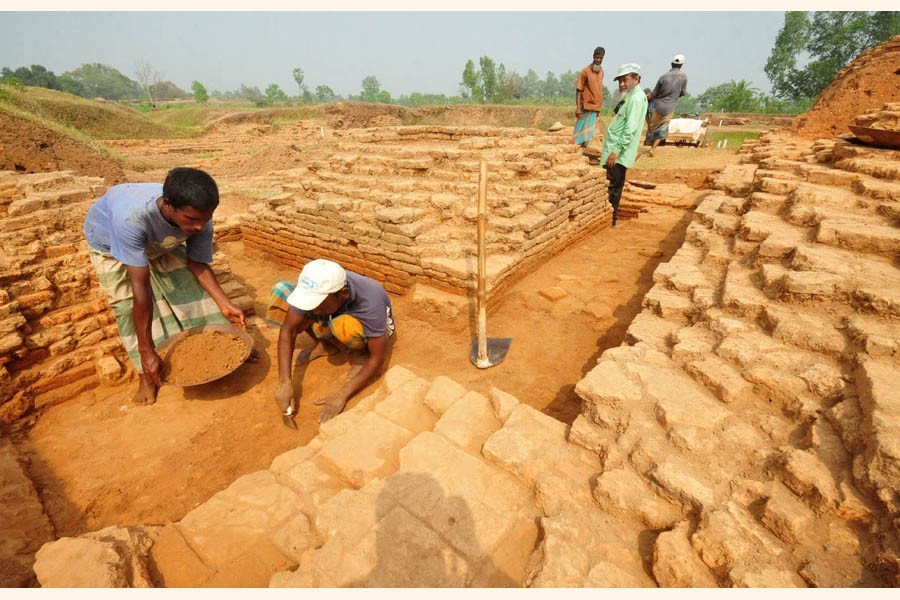 Had it not for the chance survival of a few descendants of Dhaka's Nawab family, the present Nawab Bari Museum would have remained a mere dream. Nowadays, the museum standing on the northern bank of the Buriganga River draws hundreds of visitors daily. In an aberrant twist of events, a mega shopping mall or a riverside amusement park could have replaced the Nawab Bari, the ancestral palace of Dhaka's Nawabs. So was the case for the Lalbagh Fort on the southern fringe of the New Dhaka. Due to its legendary and historical importance, and its prime location, government agencies or private encroachers couldn't muster the courage to eye it for any crass, material purpose. Many edifices, bridges or installations were not that lucky. They have long vanished.

The latest of them, a veritably priceless century-old building on Old Dhaka's Court Street --- formally known as Neelam Ghar, or auction house, fell to the strikes of sledge hammers, shovels, spades etc, as part of a latest architectural atrocity. Sensing in advance a swoop on its existence, conservationists had long been on guard. They realised the historic building's importance as a heritage site. To their utter disbelief, the building was leased to the Dhaka Bar Association by the Dhaka district administration. In time, the representation of the old-day ornate masonry slowly enhanced its historic value. Recently, the grandly built but small building was demolished. The future plan, as has been leant, is raising a 20-storey office building. Perhaps conforming to the modern, or post-modern, architectural mantra, the authorities sought to reap the maximum benefits from minimum spaces.

In a short time, the historic Neelam Ghar would be found remaining lost in the grand presence of a multistorey structure. Only those who saw it in their own eyes would remember it faintly.

During the last two to three decades, a number of once-magnificent buildings have vanished from different parts of the country, including Dhaka. Except the nationally known ones, many remotely placed obscure landmark structures have been demolished mindlessly. Many are on the verge of extinction, with some on the track of fast disappearance. Unassailable syndicates are active in all parts of the country. They allegedly work as the agents of powerful encroachers, who do not hesitate to grab long abandoned and deserted properties. These quarters are incredibly powerful, having direct links to highly placed quarters at local, regional and national levels. Their brazen swoops on the rivers, river banks and historic sites mostly remain willfully unnoticed.

The ongoing frenzy of destroying ancient sites and constructing high-end buildings in their place has been gaining faster pace in the recent days. Despite being a marvel of architecture built in the medieval Europe, Italy passionately looks after the Leaning Tower of Pisa in the country. The country and its people consider the 'defectively built' tower as a national heritage. The world's largest ancient Colosseum, an oval amphitheatre, located in Rome, remained in place in the Italian capital since 70 AD. No ruler of the country has ever thought of tearing it down. Though on a smaller scale, Old Delhi's QutbMinar has occupied a prestigious place among the world's UNESCO heritage sites. Although celebrating a victory year, the tower's construction is related to the names of warrior-rulers Qutb-Ud- Din Aibak, Iltutmish, Firuz Shah Tughlak and many other conquerors.  The successive Delhi-based rulers took utmost care to preserve it.

All patriotic countries offer more or less a similar picture. Heritage-conscious countries range from Mali, Jordan, to Pakistan --- apart from, of course, Egypt, Peru or Guatemala. India and Pakistan appear to be highly sensitive about their historic sites. In Bangladesh, land grabbers keep biding time for opportunities to swoop down on the sites of Mahasthangarh or the secluded Paharpur area.