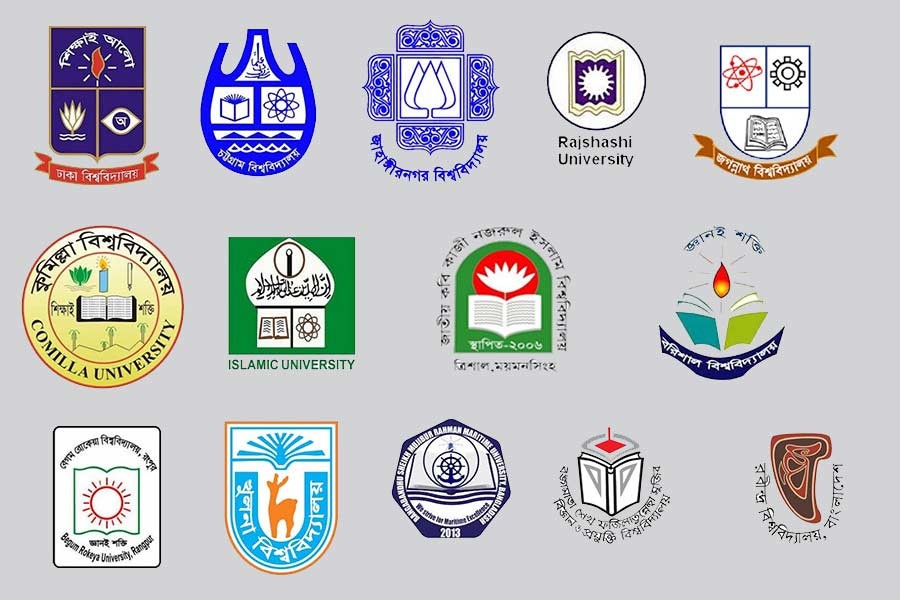 Monograms of some public universities of Bangladesh

Public universities in the country are passing through a critical juncture. There is a growing dismay in society about the conduct of some students and teachers in the country's highest institutions of learning. Once regarded as ideal institutions of nation building, they are now perceived as a place for hatred and violence. Though the majority of the students, teachers and staff members of those universities are not involved in any of these, they are facing the upshot of a tarnished image.

In fact, only a section of students and teachers are responsible for downgrading public universities. They may be small in number but powerful mainly due to connections with influential quarters. Taking advantage of their links allegedly with people close to the power some teachers have had a field day ignoring their prime duty. Again, as they have been loyal to the 'ruling party' over the decades, they were never in a position to tackle the wrong-doings on the campus.

Members and activists of ruling party student wing have allegedly run a parallel administration. They have control of the dormitories; teachers officially responsible for looking after the such halls have had little say. They have virtually become accustomed to giving a freehand to the leaders and activists of the student organisations.  As a result, ordinary students have long been subjected to ragging and torture. Those who are staying at dormitories have had to accept all the unethical and undignified activities perpetrated by the cadres.

The campuses of the universities are also under their tight grip. They rarely allow any voice of dissent and don't hesitate to crash any gathering or move to protest the wrong-doing on the campus. Over the years, news media have unveiled a series of incidents relating to patronising student cadres of the ruling party in alternating sequences depending on who wielded power.

This kind of 'parallel administration' in public universities is not only bringing down the quality of the institutions, but also giving a wrong message to society.  That's why some teachers of Dhaka University could argue that low position or even absence of the country's premier university in different global ranking matters little. That's why some teachers could brush aside allegations of wrongdoings. When some teachers are involved in unethical behaviour, they lose their moral position to guide students in the right direction or take step to contain wrongdoings by the latter.

Taking effective measures to curb so-called 'parallel administration' in some public universities may have been long overdue. Tax-payers of the country can't allow wastage of human resource in the making on account of irresponsible role of some university authorities.