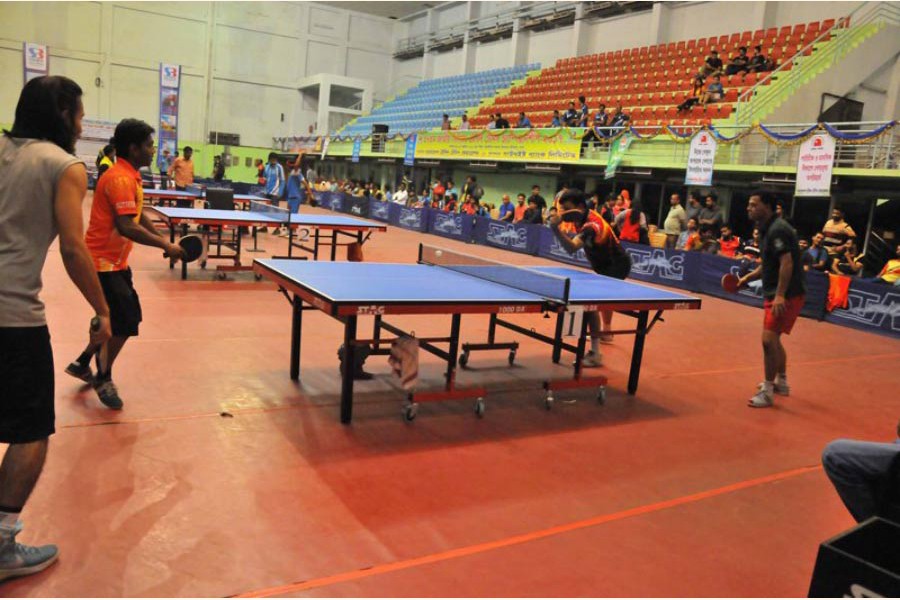 Table Tennis in Bangladesh appears to be passing through a period of gloom and stagnation, especially during the past 5 years. The latest episode that caught the attention of its adherents has been the return of Taka 1.66 million by Bangladesh Table Tennis Federation (BTTF) to the concerned ministry, although the amount was sanctioned for holding training camp for national players. The camp was supposed to be held for the upcoming South Asian Games slated to take place in Nepal in December this year. This amateurish and controversial move by BTTF has been in sharp contrast to other federations, who have already launched preparatory camps for the SA Games.

According to media reports, the general secretary of the federation Sheikh Mohammad Jahangir Alam returned the money through a letter addressed to the secretary of the Ministry of Youth and Sports on 7 July. He claimed in his letter that the camp had 'already been organised' with the help of other sponsors. But on enquiry, it was found that the federation in fact did not hold any camp whatsoever. Rather, it was gathered that signatures on blank papers were taken from eight leading players, which were intended to be shown as bills for expenditures. Some leading TT players lamented that a long-term training camp would have benefited them a lot, but instead a financially-handicapped federation like BTTF had surrendered the money without utilising it in a proper manner!

Interestingly, while talking to a Bangla daily, the BTTF general secretary said a few days ago, "The National Sports Council (NSC) had advised that expenses incurred for participants in the camp would have to be submitted in the form of bills. We told them, when we had not started the camp, how could we submit the bills? The NSC officials then informed that 18-20 federations were providing accounts of their expenses through bills. Later, when the NSC sanctioned the money, the BTTF president opined that the money should not be used as the camp was not started. We then returned the cheque. We told them, we would take the cheque only when we start the camp".

This dubious explanation of sorts put forward by the BTTF general secretary generated more questions than answers among knowledgeable quarters, and it was swiftly followed up through a press conference by Bangladesh Table Tennis Players' Association (BTTPA) on 31 July. Headed by the five-time national TT champion Dr. Manash Chowdhury, the association brought some serious allegations against the BTTF vice-president Khandokar Hasan Munir and demanded his immediate resignation. Munir had been the general secretary of the federation since 2014 until a new committee of consensus took over early this year. Although an election was scheduled to be held for the new committee, Munir was allegedly successful in installing a consensus committee of his choice through collusion with the forum of district and divisional sports associations, who have majority voting powers. Sheikh Jahangir Alam was selected in the process as the general secretary.

The BTTPA leaders, that include some former national champions, alleged that Munir had become all-in-all in the federation and was also trying to drive a wedge between the players through coercions and intimidations. He was also reportedly pulling the strings of the federation, as the current general secretary was not very active due to his political and business preoccupations. A top-ranking player alleged he had to pay Taka 32 thousand to Munir for the dresses of the national team ahead of Bangladesh's tour to Hungary this year, so that he could avail the opportunity of representing his country for the first time. Others revealed that they were not paid daily allowances even while playing for the country abroad. The players also complained that the BTTF vice-president had used his influence to induct an unqualified coach for the national team. As is the usual practice in Bangladesh, the BTTF vice-president Munir flatly denied all allegations brought against him, claiming to the media that it was the general secretary who was responsible and accountable for the BTTF actions.

In the above backdrop, if we take stock of the BTTF activities since 2014, we find that hardly any noteworthy tournaments have been organised by it apart from holding national championships (in 2015, 2016, 2017 and 2019), annual ranking tournaments and the metropolis table tennis league (2018). Even the national championship was not organised in 2018, which is quite extraordinary. National coaching camp was also held only once during the past five years, and no replacement has been made for the national table tennis coach Hafiz after his retirement in 2017. The national women's team could not participate in the World TT Teams' Championship held in Germany in 2018 due to failure of the federation to obtain visas for players from the German embassy on time. Two leading players were again denied Hungarian visa for the World TT Championship for individual events held this year, again due to failure of the federation to take timely action. Besides, no annual TT calendar has been chalked out in advance by BTTF since 2014, as is the usual practice all over the world.

It is a great pity that whereas there should have been at least six major tournaments in the country each year to keep the players busy with their practice sessions, no notable tournaments were organised by BTTF during the past five years. Regular coaching camps inside and outside the country are also a must for maintaining the competitive edge of TT players, but the federation has miserably failed in this area as well. Even in holding the national championships, a lackadaisical and shabby approach has been followed by it. For example, even the final match of the teams' event at the 2017 national championship was not held due to a scheduling disaster, which is incomprehensible in a modern table tennis playing nation. The federation has also displayed its novice-like amateurish attitude in preparing fixtures for the national tournaments, where the same name appears in many places and specifics like tables and timings for matches are not given in advance, although that is the standard practice all over the globe. Instead, players and teams are kept on their toes for matches throughout the day, and forced to rush in whenever the announcements are made over microphone for their reporting.

In fact, these irregularities are only symptoms of a bigger malaise haunting the country's TT arena, once considered one of the most promising games in the country after Bangladesh's independence. Even during the 1970s and 1980s, tournaments like the Shaheed Smriti Tournament, the Independence Day TT in March and the Victory Day TT in December were regular events in the table tennis calendar, in addition to other big tournaments organised by institutional or corporate sponsors in Dhaka, Rangpur, Chattogram and Rajshahi. But the frequencies of these tournaments have gradually diminished due to an indifferent attitude of BTTF officials and their failure or lack of initiative to rope in sponsors. The nature of the problem becomes clearer when we look at the composition of the consensus committee currently in charge of the BTTF. Apart from the former national men's champion Saidul Haque Sadi and the first national women's champion Munira Morshed Helen, none of the current officials had played at the highest level of national TT. But in most sports bodies, it is customarily the former national players who dominate the respective federations. It may also surprise many that both the current president and general secretary of BTTF have no background whatsoever in playing Table Tennis or any other sports at the highest level.

It has therefore become imperative now to reshuffle or overhaul BTTF, so that only former national table tennis players or sportsmen who have genuine love for the game remain at the helm of running its affairs. If and when people with professional sports background are given charge of the BTTF, only then we can expect a turnaround from the current doldrums and stagnation prevailing in the TT arena, and its progression from an amateurish gutter to a professional high-ground.