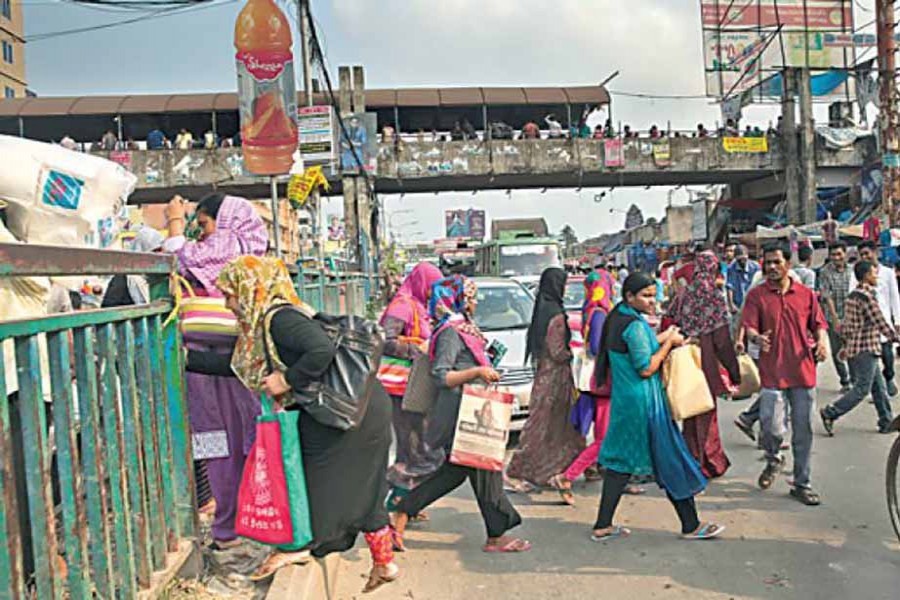 Crossing the road wherever pedestrians prefer and whenever they like has now become a deplorable habit in the city of Dhaka.  A large number of pedestrians are used to crossing the roads by merely raising their hands as if they are rendering proxy service for the traffic police to bring motor vehicles to a stop! They care little about the danger of such jaywalking. By doing so they are not only putting their lives to risk but also leading motorists to get involved in accidents.

The prevalence of jaywalking is so high at different places in Dhaka especially in peak hours that smooth traffic management on roads becomes almost impossible. The traffic police seem helpless and thus chaos on the roads reigns supreme. Neither pedestrians nor motorists seem to be respectful to traffic rules.

Though a number of factors are responsible for developing the bad habit of jaywalking, flawed policy coupled with faulty road designs is the main reason behind encouraging it.  The country's road policy is motor vehicle-centric and so are the designs of the roads. It seems that only private cars, motorcycles, buses and other motor vehicles have the right on the roads but not pedestrians. Even non-motorised vehicles, rickshaws to be precise, are occupying roads and streets narrowing the space for walk. Inadequate and partially occupied footpaths, little walkways, limited zebra crossings and no pelican crossing in this city make it very difficult for pedestrians to cross the roads smoothly and safely. A few foot over-bridges are there to cross the roads though these are not for women, children and aged people.

Finally, there is a lack of traffic literacy. Both pedestrians and motorists have little knowledge of traffic rights and traffic rules. It is important for both of them to know about their legal rights on roads and show mutual respect to each others. Without adequate literacy and continuous awareness building, such respect will not grow.

The traffic police are also incapable of applying the traffic rules and regulations impartially. They are busy with ensuring smooth movement of so-called Very Important Persons (VIPs) and care little about others.  They are also tempted to charge hefty fines on the plea of violating traffic rules as there is a good commission for them. In most cases, their intention is not to bring discipline on the roads, but to penalise motorists especially private cars and buses for their own financial benefits. Some of them are also busy colleting unauthorised tolls from different vehicles. The improper, biased and selective implementation of traffic rules turns the whole thing more chaotic where jaywalking is high.

On some occasions, the traffic police have tried to make pedestrians aware of traffic rules. Though it is a good move, the effort mostly goes in vain as pedestrians have little patience to comply with the rules of road crossing. Moreover, biased application of rules by traffic police and unruliness of motor vehicles especially buses and motorcycles make them disrespectful to traffic laws.

Another factor is related to cultural attitude. A large number of pedestrians have a wrong perception that private car is the main problem of traffic congestion on roads. They also believe that most of the car owners are corrupt. This type of negative perception makes them disappointed and they probably continue their jaywalking as a protest!

Unconditional emergency cash allowance is must

Domestic violence, the veil of secrecy

In need of a transparent mask