The US escalates tension in the Middle East 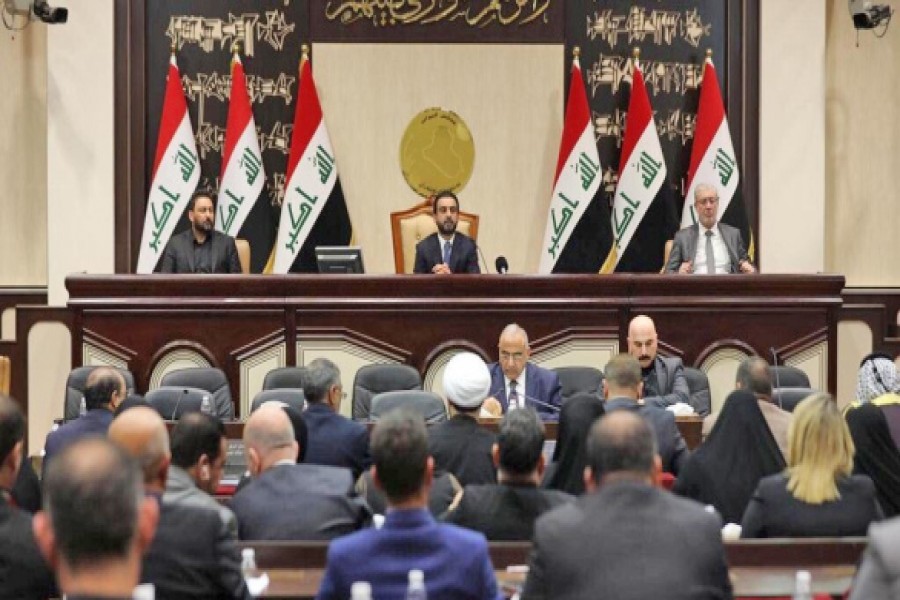 The Iraqi parliament on January 05, 2020 voted to remove US troops from Iraq. In an extraordinary session, lawmakers backed a resolution to ask the government to end an agreement with Washington to station 5,200 troops in Iraq. The resolution specifically calls for ending a 2014 agreement that allows Washington to send troops to Iraq to help in the fight against the "Islamic State" group. —Photo: Reuters

The assassination of Iranian General Qasem Soleimani, the commander of the Iranian Revolutionary Guard's elite Quds Force and Abu Mahdi al-Muhandis, a powerful Iraqi militia leader at the Baghdad International airport on January 03 escalated tension between Iran and the United States to a new height. Soleimani was killed a day after the US embassy in Baghdad was stormed by demonstrators who demanded expulsion of US and foreign troops from Iraq.

Soleimani was responsible for planning and execution of insurgencies against the US targets in Iraq. He was also credited to drive out the ISIS forces from their bases in central Iraq. He was the architect of building partnership with the Syrian army in fighting against the rebel forces in Syria. Soleimani was undertaking important diplomatic functions on behalf of the Iranian government. He was very close to the Ayatollah. Of late, he was engaged in soothing the relationship between Tehran and Riyadh. His assassination jolted the Iranian leadership.

It is unclear why the Trump administration decided to assassinate Soleimani now when he was not posing any imminent threat. He was reportedly carrying a message from Tehran, a response to Riyadh's earlier query, to deliver to the Iraqi prime minister. The White House claimed that Soleimani was planning an assault on the US targets, but the officials could not produce evidence to the Senate Foreign Relations Committee on the alleged plot by Soleimani. The Committee members viewed the crisis resulted from Soleimani's assassination as Trump administration's own creation.

The US-Iran diplomatic relation has been tumultuous since the Islamic revolution took place in 1979. Washington has been accusing Iran for pursuit of nuclear weapons for many years and in order to deny nuclear capability the US had imposed series of economic sanctions against Iran. Following the 9/11 attack, President George Bush termed Iran, Iraq and North Korea "axis of evils" and vowed to take on them. In 2003, the US-led Iraq invasion toppled Saddam government and installed a puppet regime. That led to countrywide insurgency which lasted for over ten years. The US lost over 4,500 soldiers and around 35,000 soldiers were severely wounded in the insurgency. The US treasury lost about $600 billion dollars in the war.

President Barack Obama understood the futility of confrontation with Iran and decided to reach out to the Iranian leadership. Under his leadership, a high-powered technical team was engaged to negotiate Iran's nuclear programme. Following a protracted negotiation, also participated by European Union, Russia and China, a nuclear deal was concluded with Iran known as Joint Comprehensive Plan of Action (JCPOA) in 2015. This was approved by the US Senate and hailed by the UN Security Council. Iran's pursuit of nuclear arsenals was halted and a moratorium on enrichment of uranium was imposed. In exchange, the United States terminated economic sanctions against Iran and released frozen Iranian assets valued billions of dollars. Iranian economy began recovery from decades of stagnation. Iran began to invest in procurement of new passenger aircrafts and improvement of infrastructure. European commercial firms rushed to Iran for investment.

Israeli leader Benjamin Netanyahu launched a tirade against JCPOA. He complained that the agreement conceded too much to Iran and enabled Iran to acquire nuclear bomb within a short time. He found an exuberant partner in Donald Trump. During the presidential campaign, Trump spoke of the Iran nuclear agreement as a "worst deal" and vowed to repudiate it, if elected.

Following his assumption of presidency, Trump began abdicating one agreement after another negotiated by the Obama administration. In 2018, much to the chagrin of European partners, Trump withdrew from JCPOA and started imposing economic sanctions against Iran. The sanctions were comprehensive, and Iran couldn't even export oil. Its economy started contracting and inflation soared making people's lives miserable. European signatories tried to salvage the agreement but in the face of US sanctions, their efforts failed. Nonetheless, they urged Tehran to adhere to the agreement. IAEA, the UN nuclear watchdog, reiterated that despite obstructions, Iran has been in compliance of the nuclear deal. Had the US remained with the JCPOA, it was very likely that Iran would have been in the larger coalition to fight against the Islamic State (ISIS). Syrian crisis would not have grown to such an intractable level and human sufferings would have been much less.

The civil war in Syria and in Yemen and the emergence of ISIS on the west of the Euphrates ignited the Shia-Sunni division. Iran came out in support of the beleaguered Syrian leader Bashar al-Assad and in favour of Houthi rebels in Yemen. Saudi Arabia and United Arab Emirates embraced the other side of the conflict. After a period of silence, Russia came in support of Assad regime. On the other hand, US army was deployed to train and guide the rebel forces.

Iran's military support to Assad regime has been overwhelming. It lost 2,500 soldiers including 10 Generals. The number of wounded soldiers exceeded 12,000. Houthis in Yemen put up formidable resistance to Saudi air and ground attacks. In October, the Houthi rebels attacked Saudi oil fields and inflicted colossal damage to the extent that Saudi oil production was reduced to half. It is still unclear whether oil production has reached the pre-attack level.

Trump's withdrawal from JCPOA and imposition of harsh economic sanctions left no option for Iran but to step up against US hegemony. It launched a drone strike on the US oil tanker passing through the Strait of Hormuz in October. One Japanese and one Norwegian vessel were also obstructed by floating objects at Hormuz.

Soleimani's assassination exacerbated the situation in the region. Thousands of protestors in Baghdad and other Iraqi cities demanded withdrawal of American troops from Iraq. Interestingly, a few weeks ago a huge crowd in Baghdad demanded removal of Iranian militia from Iraq. The people of Iraq do not tolerate Iranian hegemony, nor do they approve American subjugation. Ironically, the assassination of Soleimani pushed Iraq into the lap of Ayatollah Khomeini. The Iraqi parliament has passed a resolution asking Washington to close the army bases and withdraw its troops from Iraq.

Iran, as expected, launched a number of missile attacks on the US military installations in Baghdad and in Irbil in northern Iraq on January 07. Pentagon confirmed that there were no casualties and damage was minimal. Iranian Foreign Minister Javad Zarif said, "Iran took and concluded proportionate measure in self-defence. We do not seek escalation of war but will defend ourselves against any aggression." The Ayatollah attributed this as "a slap on the face" for the United States. On the following morning Trump said, "Iran appears to be standing down, which is a good thing for all parties concerned and a very good thing for the world." In the same press conference, he resolved that Iran will never be allowed to acquire nuclear weapons. Addressing the Iranians, he said, "We want you to have a future and a great future - one that you deserve, one of prosperity at home, and harmony with the nations of the world. The United States is ready to embrace peace with all who seek it."

It became evident during this short crisis that the United States has been left alone. No European country approved assassination of Iranian General on foreign soil. There was no word of support from NATO members either. When US Secretary of State Mike Pompeo talked to his European counterparts, nobody endorsed US action.

The crisis is not over. The Americans are wary about their president. The Congress has passed a resolution curbing Trump's power to take military action against Iran without prior congressional approval. Tehran, on the other hand, announced that it is no longer required to comply with all provisions of JCPOA - it would now resume enrichment of uranium, the raw material for the bomb.

The art of being a good project manager

Relationship: Thus far and no further

Many faces of honesty