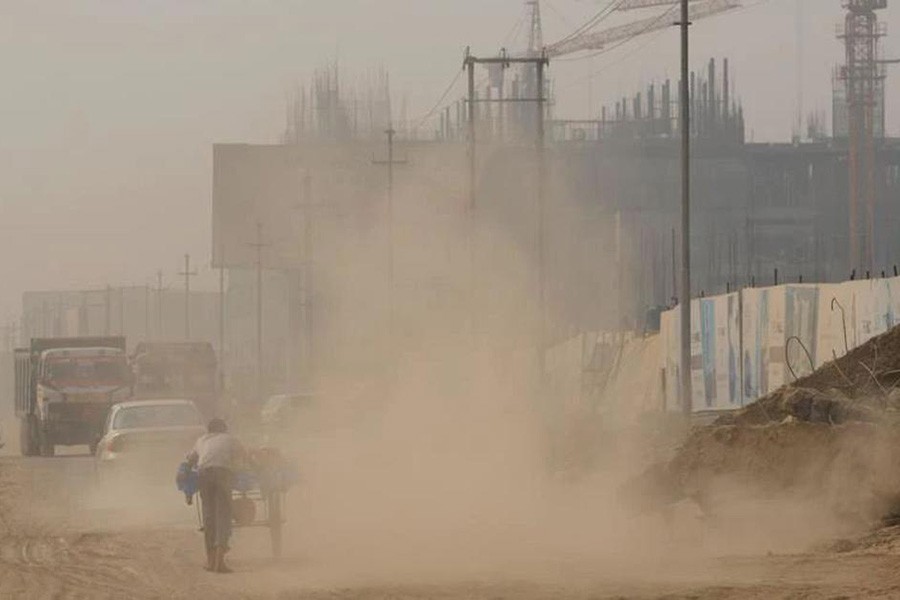 It was announced a little over a week ago that Dhaka's main roads will be drenched with water at a certain time every day. The objective was to fight the menace of dust during the dry winter season. It is during this time, the air remains filled with dust, some carrying agents of different airborne diseases. Outwardly, earthen dust is a great urban nuisance and annoys people in general, be they pedestrians, on rickshaws or travelling by vehicles.

Similar battles against dust using water were waged in the capital in the past. The results remained buried in a haze. A few upscale and important roads would be found getting awash with water every day despite their being normally dust-free. The dilapidated roads filled with loose dust-filled potholes adjacent to the sites of road repair work and, thus, piles of dry soil scattered nearby, do not get a sprinkling of water.

The same is true with many obscure areas witnessing the construction of metro rail viaducts, where work cannot progress without digging holes. The urgency with which the holes are dug is found absent later. Dried-up mounds continue to blow off dust in every direction thanks to the unpredictable dry gusts of winter wind. According to many, the dust piles also need to be kept sodden with water.

Drenching the roads of Dhaka by specially made vehicles, is, undoubtedly a laudable idea. As a concept, few could be more befitting to this densely populated city. It's because the project, though stop-gap in nature, is solely dependent on water. Dhaka may have dearth of pure water. But its four rivers, including the largest -- the Buriganga -- do not go completely dry. There are also a number of unused ponds. With pragmatic utilisation of water from these sources, the two city corporations can keep the whole city free of the dust menace. To the consternation of the city dwellers, discriminatory attitudes to the roads in need of water-wash have started becoming acute. As for instance, it's mainly the VIP roads and those situated in the exclusive zones, which are seen being preferred by the relevant authorities. It smacks of bias and unfairness.

Once fully tree-covered with carpets of grass covering the roadsides, Dhaka has hardly felt the need for drenching its concrete roads by employing water-lorries. That green and dust-free Dhaka has long been lodged in the memories of its senior residents.

However, like in many cities in the South Asian region, Dhaka couldn't retain its original character -- free of dust and noise. Lately, the menace of air pollution has started afflicting its people to such an extent that many have started mulling a new and refreshing life outside the capital. Only a few can translate this dream into reality. The rest appear to be doomed to remain stuck in this city, inhaling dust and fumes of all sorts.

As a fast-developing city with dozens of urban infrastructure and communication projects in the pipeline, it can only go forward with the building spree. There are no ways to stop half way through. Construction work-related dust constitutes both annoying and noxious byproducts.

Given the nation's goal set to get out of the LDC group, people have to bear with these ills for now. The crux of the matter is the less the period of suffering, the better it is. It's unsettling to learn that many people in Dhaka have stopped coming out of their homes, unless pressed by urgency, to avoid dust.

At present, there are few areas in Dhaka where road-renovation, and repair and relocation of utility lines are not in place. Facial masks are said to be too weak to prevent invasion of the dreadful dust.