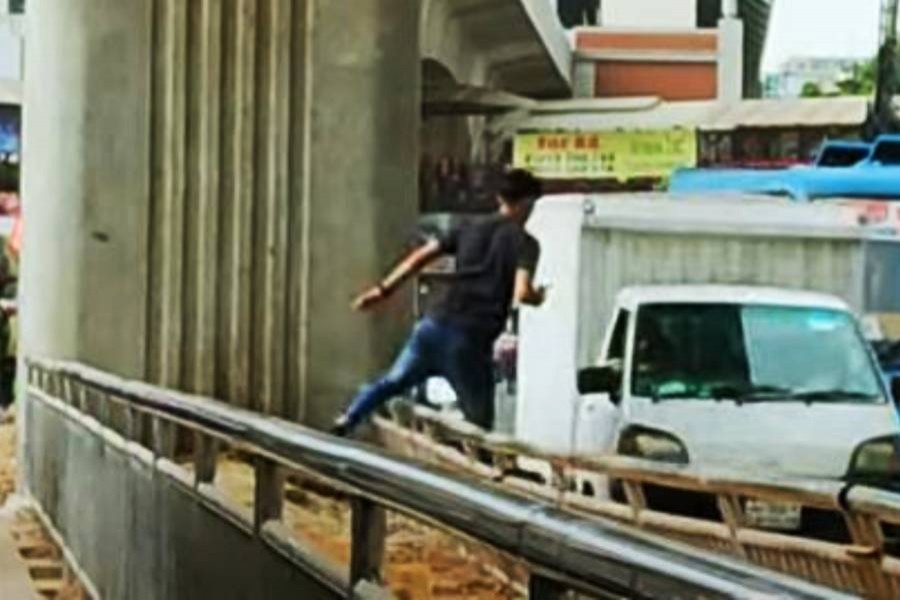 The tendency to defy restrictive laws in Dhaka city's public places has nearly become chronic to its residents. The scenes of normal road-crossing through the designated places marked on roads and by using foot over-bridges are conspicuous by their absence. Few care to abide by the traffic authorities' impassioned entreaties to follow law. With patience reaching its  end, the authorities on occasions resort to on-the-spot fines. This extreme and humiliating measure has also fallen flat. At such a pass of the situation, the residents of the capital may be destined to be known by an apt moniker --- unruly and rustic.

A grim aspect of Dhaka's road anarchy is the trend's creeping into the other large cities of the country. Until the recent days, the flouting of traffic rules has been limited to the mega city of Dhaka. Due to its sheer size and choked roads, many incidents of jaywalking used to go undetected. The media people normally focus their lens on a fraction of lawbreaking incidents. It is the weird efforts by pedestrians, especially the grown-up, well-dressed women jaywalking which would catch the lens of the probing cameras. Conventional jaywalking by raising one's arm before a speeding vehicle has become a normal spectacle. But latent derring-do has lately witnessed people scaling concrete or steel-made fences on the medians --- with utter nonchalance. Media photo frames do not fail to show the safe over-bridges just yards away, lying deserted, a handful of people walking by. Lately, the atrocious and unimaginable styles of road-crossings have moved to the overhead flyovers. It's true, reckless bus drivers and conductors drop passengers at critical points, from where they have to take risk-filled attempts to go to the flyover's opposite side. But a normal scene comprises views of terrible attempts at crossing the overhead highways. Flyover authorities have no provisions for allowing people to even walk along any side of them.

That the custom of crossing the busy roads in deviant ways would eventually move to the bigger cities outside Dhaka was a foregone conclusion. Jaywalking is purely an urban blight. The waterways do not have to deal with swimmers moving in wrong directions. Boats, private or rented, follow their designated routes. Like seen in Dhaka, the cities fast emerging out of the district or divisional towns have already started witnessing the practice of jaywalking. It's the new metropolitan centres in the country, with the number of vehicles and pedestrians rising fast, which have picked the habit of flouting traffic laws applied to road-crossing. It took Dhaka several decades to turn into a centre of habitual jaywalkers. It's in the early part of the new century that Dhaka first enjoyed the 'benefits' of jaywalking. In the 1960s-70s, the round road-signs in the capital's important parts are still fresh in the memories of many Dhaka dwellers. Those signs asked people not to run while crossing roads. Instead they should walk slowly while crossing a road upon checking vehicles weren't speeding towards their crossing-point. In those days, the two-way traffic movement had yet to be in place in Dhaka.

The feature that instantly singles the newly emerged big cities out is their adopting the dreadful jaywalking so soon. It's not that these cities are highly populated. Most of their high-rises are district or sub-divisional offices, the rest being apartments and condominiums. The roads are also free of Dhaka's terribletraffic jams. In such a situation, the style of climbing over a pointed steel-fenced barrier in the mid-road median can be defined as a spillover from Dhaka's jaywalking. This kind of copying Dhaka's ills doesn't bode well for the new city people.Such practices are still rarely encountered in the fast-growing Chattogram metropolitan area.