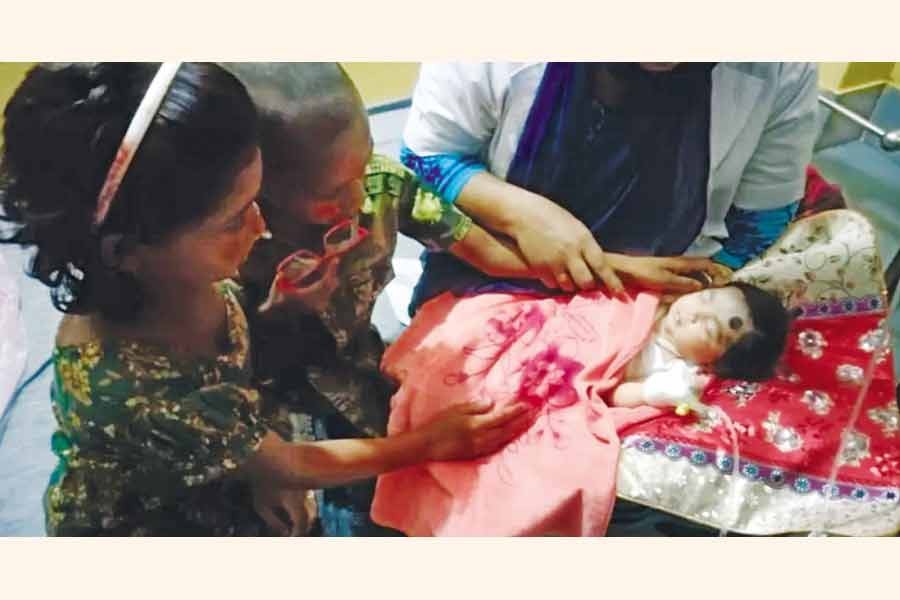 Many sympathising people feel puzzled over the fate of the newborns, thosewho lose their mothers immediately after their birth. In most of the cases, the mothers and the babies are victims of various types of road accidents. The mothers die leaving their babies in a strange world; mostly at the mercy of people who nurture at least a semblance of kindness for the unknown children. In general, these newborns remain deprived of the love of their 'fugitive' fathers.

In some recent cases, kindhearted strangers have been found taking these orphaned children into their care. The child which has lost its mother as they met a road accident in the capital is kept in a hospital's children's ward. The hospital's nurses arrange milk for the baby. In a recent case, after a few days, there was none found nearby to take the responsibility of the baby. Finally, a childless mother unofficially adopted the orphaned the baby. In this vast city, dozens of underage children get lost every day. Besides, many of them are left in the streets at the mercy of destiny. Finding the trace of a safe 'shelter house' thus makes many feel uplifted. Located at Azimpur in the heart of the city, a government-run shelter is said to be an ideal abode for the tiny tots aged between 'one month and seven years'. These babies have been enrolled on the facility upon being located as 'lost' or 'abandoned'. According to a report in a print media outlet, the shelter has seven branches across the country. It is said to provide the babies with all the needs required for their proper physical and mental growth. Twenty-six staffers are said to be working for the shelter for carrying out various jobs.

The orphaned infants' shelter carries elements of surprise and curiosity for many. Lots of people living in the Azimpur area since the early 1960s have expressed their utter surprise at the 60-year existence of such a magnanimously noble children's project in their broader neighbourhood. Most of these people have heard of the government-run maternity hospital, as well as the Salimullah Orphanage and Farid Uddin Siddiqui High School. But they draw a blank on being asked about the start of 'ChotomoniNibash'. Many have queried if the authorities concerned on the management of the home want to keep it limited to a small number of kids. But the country needs dozens of such facilities in the districts or upazilas across the country. Perhaps in its bid to provide personalised quality care to these hapless children, the Azimpur centre has opened five branches in the divisions of Chattogram, Rajshahi, Sylhet, Khulna and Barishal. But with the increase in poverty and destitution amid the corona pandemic, the nation may need scores of more such child facilities.

A nearly similar scenario unveiled in the post-Liberation War Dhaka. Hundreds of women assaulted by the Pakistani occupation army were seen taking their 'war babies' to missionary houses in Tejgaon and Sadarghat. They had no other way, except leaving their babies in the care of nuns at the missionaries. The news spread like wildfire in a number of European countries. The scenario that followed was the childless wealthy European families rushing to the said missionaries. Hundreds of Bangladeshi baby girls and boys found their 'parents' in the couples living in the European countries. Upon reaching youth, many of these 1971 babies rushed to Bangladesh in search of their lost parents. The searches of some proved a success as they were able to reunite with their aged parents and close relatives. It was Facebook in the main which had made the 'nearly impossible' missions possible.

The number of safe shelters for orphaned and abandoned babies ought to be increased without let-up --- given the insensitive treatment being dealt to them by society.

Power tariff hike and its ramifications

Getting to know AI

Adjusting to rhythm in chaos