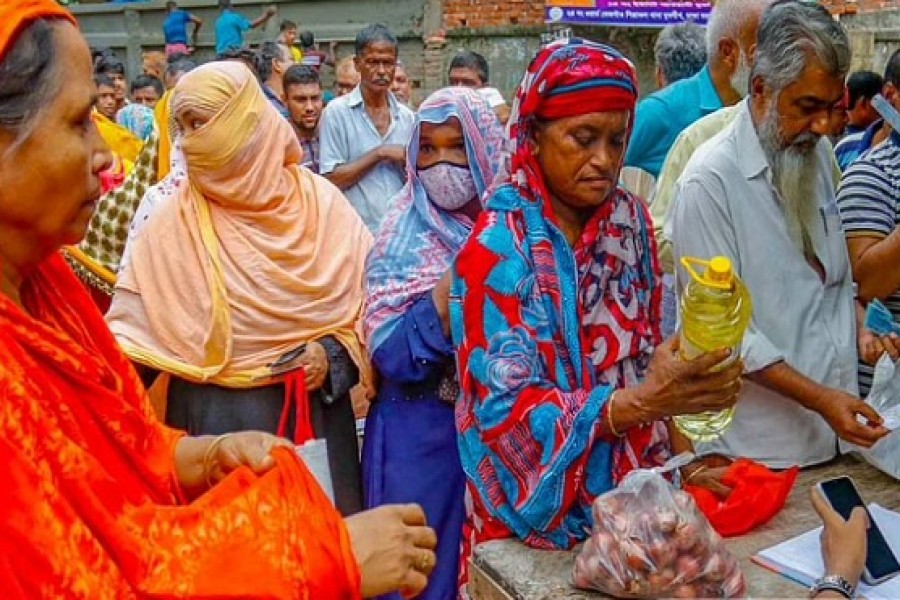 In June this year, the inflation rate in Bangladesh soared to a nine-year high of 7.56 per cent. Higher inflation has become a matter of serious concern as rising daily essentials prices are intensely hurting a significant portion of households across the country. But behind the widely reported higher inflation levels, a major concerning issue - ‘inflation inequality’ is often paid minimal attention.

The COVID-19 pandemic led to both supply and demand side shocks. The pandemic also deepened inequality worldwide as rich people got richer and the poor became poorer.

As the COVID-19 situation has improved, demand for food and non-food items has increased. However, the world is now facing enormous global supply chain disruptions due to the Russia-Ukraine War, which has impeded production and trade, creating catastrophic fuel and food shortages globally.

As a result, prices of basic food items to luxurious goods have dramatically increased. A new poor class had emerged due to the COVID-19 pandemic, which has seen a surge in their number as the ongoing inflationary pressure has disproportionately affected the low and middle-income households.

A rise in price levels has reemerged the inflation inequality issue worldwide. Inflation inequality is a phenomenon where the brunt faced by rising prices has an unequal impact on different income groups due to differences in the price increases of different goods and variations in spending patterns across households.

As a result, middle and lower-income groups with a limited consumption basket have to shorten their basket even more by excluding necessary items. In comparison, the higher income groups make insignificant or no changes.

For instance, the price of eggs has increased by around 32 per cent in the country in the third week of August 2022. This increase in egg price significantly impacts the middle to lower-income household’s consumption basket, while there is an insignificant or no impact on the consumption basket of the higher-income households. Scenarios like this deepen inequality in society and an economy which has serious consequences on food and nutrient intake and outcomes.

As middle and low income groups lack savings, they face more difficulties on smoothening their consumption. Also the savings, the aforesaid groups have are held in low interest rate bank accounts and in cash which are generally not shielded from rise in price levels.

Due to differences in individuals’ consumption pattern, people may also experience differing inflation rates. The relative weightage of a specific good in the consumption basket is a key determining factor of inflation inequality.

This shows that a rise in general price levels will have a significantly higher impact on the middle and lower income groups due to their higher share of food consumption expenditure to total expenditure. Thus, the type of inflation a household experience also depends on the composition of its spending or consumption basket.

So, the question arises, what should be done to mitigate this situation? The Trading Corporation of Bangladesh (TCB) provides essential food items at subsidised prices to the lower-income group of the country.

The coverage and allocation of this programme need to be extended until inflation falls to a moderate level. Bangladesh government has chalked out a plan to provide special cards for 1 crore people to buy essential items at lower prices and has already distributed the cards to 50 lakh people who can buy rice at only Tk 10 per kg.

Controlling the market will also play a key role here. We see that even when the rice production was substantial this year, the rice price went up without justifiable cause.

For instance, transportation costs increased by Tk 0.7 while the price of rice soared by Tk 5 at major wholesale markets in the country.  Unscrupulous syndicates work actively behind this price hike. These types of syndicates need to be broken apart and punished to control the unreasonable price hike.

In the long run, mitigating socioeconomic disparities, boosting productivity, and compatible monetary and fiscal policy will help alleviate such inequality.