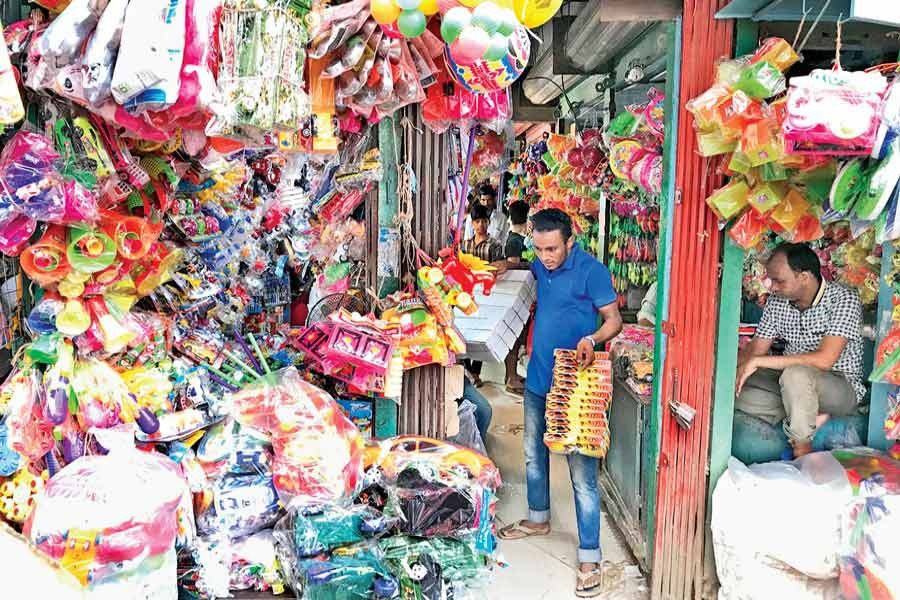 A wholesale toy shop in the city. —FE Photo

Few tiny tots and teenagers across the world have ever been found averse to toys. Every child likes to play with toys. Children of Bangladesh are no exception. The common toys of the country date back to the pre-Christ era, and the times even earlier. Those comprised mainly clay dolls, wooden carriages or different kinds of flute. Given the drab look of the traditional Bangladesh toys, even in the late 20th century, the news of the country's new-generation toys attracting overseas children in 2022 appears startling. Automated and semi-automated toys have been widely available at upscale markets since the 1950s. But those used to be imported from the UK. Toys made in some other developed countries have also been available in Bangladesh. However, the locally made battery-run toy cars, tanks, helicopters etc began luring the teenage boys in the later days. Those accompanied laughing and dancing dolls.

The fact that the sophisticated versions of toys made in this South Asian country might one day muster the skill and technology to win over the European and American children was once a pipedream. But this disbelief has long been consigned to the past. The days of dull-looking and funnily antiquated toys are over. Who could ever fancy that the Bangladesh-made remote controlled cars, aircraft or robots would in the early 21st century occupy a dominant place in the overseas markets of the developed countries? These countries themselves have long excelled in manufacturing marvellous toys in different phases of the modern times. Their toys continued to enjoy a steady demand among children throughout the world. These countries include Netherlands, Spain, Germany, the UK, Russia, and many other toy-making European nations, Japan, Australia and the US. Of late, Indian toys have sparked demand among the middle-income nations.

The entrance of Bangladesh into the international toy market as an exporter with great prospects is no unusual phenomenon. Nor is the potential exporters' impressive performance in the sector. After the start of its export activities, the initial consignments were welcomed with a kind of warmth that catapulted its world position into a comfortable trajectory. As has been forecast in June this year, the country's toy exports are expected to hover around $466.31 million by 2030. But it is hinged on the continuation of the present growth spree. As has been observed by the Federation of Bangladesh Chambers of Commerce and Industries (FBCCI), "Bangladesh might become the world's 28th largest exporter of plastic toys if the current growth rate continues."

Toy manufacturing and marketing necessitates meeting a lot of basic prerequisites. In fact, almost all the countries make toys to cater to the needs of their child population. These toys are mostly made in an informal sector, comprising makeshift factories in the slum areas. People having little understanding of child psychology, and the imperative of keeping them free of physical harm while at play normally run these mostly unapproved toy industries. Starting from the 20th century and all the way up to the early part of the 21st century, children's safety has been attached special emphasis while making toys. Unlike the plastic-made handy toys for toddlers, manufactured with special care for keeping them free of technical intricacies, the toys meant for older kids are not that simple. In order to make them tempting to the electronics-savvy boys and girls, the manufacturers attach many built-in devices to the toys.

The toy importing countries, thus, keep a special watch on the products. They inspect minutely if there are risks of hazards in any of the imported toys. Keeping children out of harm's way while they play with toys is a special concern for them. In its goal of the toy market expansion, Bangladesh ought to lay emphasis on this aspect too.

The outcome of Nancy Pelosi’s visit to Taiwan

Tragedy that should not have happened

Child-drowning in a land of rivers