'No' to bringing electoral process to disrepute 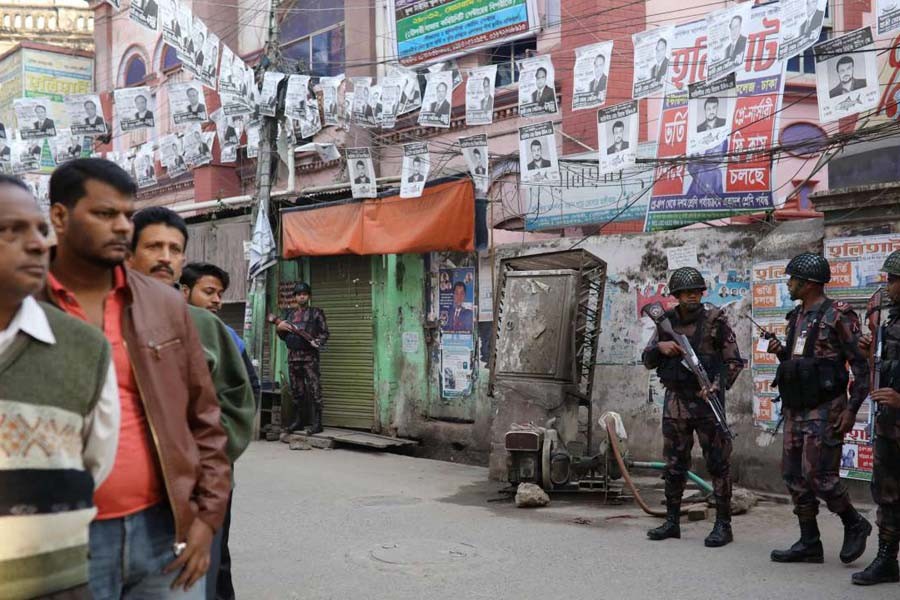 If election campaign was marked by some stray incidents of violence, the polling day happily was free from all such incidents. Post-polls time was also mostly peaceful. But an ugly incident of sexual and physical abuse of a mother of four in Subarnachar, Noakhali has come as a great shock and loathing. This has sullied the otherwise nice environment of the day.  The incident came contrary to the turn of events. Another incident of reprisal exacted on an entire village is reported from Tanor, Rajshahi. In both cases, voting for paddy sheaf has been considered a crime by some overenthusiastic ruling party cadres.

In neither instance, have their votes tipped the balance in favour of their candidates to emerge victorious. Before her rape on December 31, the victim was requested by a union parishad member and publicity affairs secretary of the Subarnachar unit of the Awami League to cast vote in favour of 'boat' symbol. She did not comply with the request and so was threatened with dire consequences for non-compliance.

Accordingly, at the UP member's instruction about a dozen of his accomplices dragged the woman out of her home from in front of her husband and children to gang-rape her. Her illiterate husband and 17-year old son were left tied in their house. What a ghoulish mentality! This reminds one of many such incidents immediately after the 2001 polls in which the BNP-Jamaat came victorious. The most publicised cases were those of Purnima Sheel of Sirajgang and a teenage girl of Char Fasson. This time no other such incident has been reported but the Subarnachar incident is enough to bring the entire electoral process and the AL's victory to disrepute.

Yet there is a marked difference between the mass attacks on minority communities in the country's south and AL workers almost everywhere in 2001 and the Subarnachar incident. Although the main accused was not included in the case filed following the incident, not only was he charged but also arrested later along with most of his accomplices. His party also expelled him for his alleged involvement in the crime. The perpetrators of crimes in 2001 were allowed to go scot-free. This time the criminals have been brought to book. Hopefully, the law will take its own course and they will be meted out the punishment they deserve. What the woman and her family have suffered cannot be recompensed by anything in the world. But if the perpetrators are punished, it may serve as a deterrent to future such bestial acts.

As for the village Tanor in Rajshahi that stands guilty of casting more votes for 'paddy sheaf' than for 'boat', the punishment is quite uncalled for. No bus and vehicle are reportedly allowed to enter the village. Power connection to the village has been snapped. Drivers with their motorised three-wheelers are not allowed to get out of village. And even the deep tube-wells have been taken possession of by AL men. Now this is rather intriguing. If buses do not ply on the roads running through the village, the AL followers too will suffer. Similar is the case with disconnection of power lines. Already two teachers from the village on their way to their college on a motor cycle have been stopped and beaten. Now farmers of the village fear that they will be prevented from irrigating their crop fields with the forcible capture of the deep tube-wells.

Immediately after the election victory, AL General Secretary Obaidul Quader made a wise announcement in that he instructed his party followers to show restraint and not to bring out victory processions. The instruction has mostly been complied with. These two incidents, however, are in total contrast to this stated principle. The party has already expelled the rogue elements; now the need is to take measures so that such crimes committed by anyone — party cadres or not — will be dealt with legally, not politically.