No chance of a return of the lost world 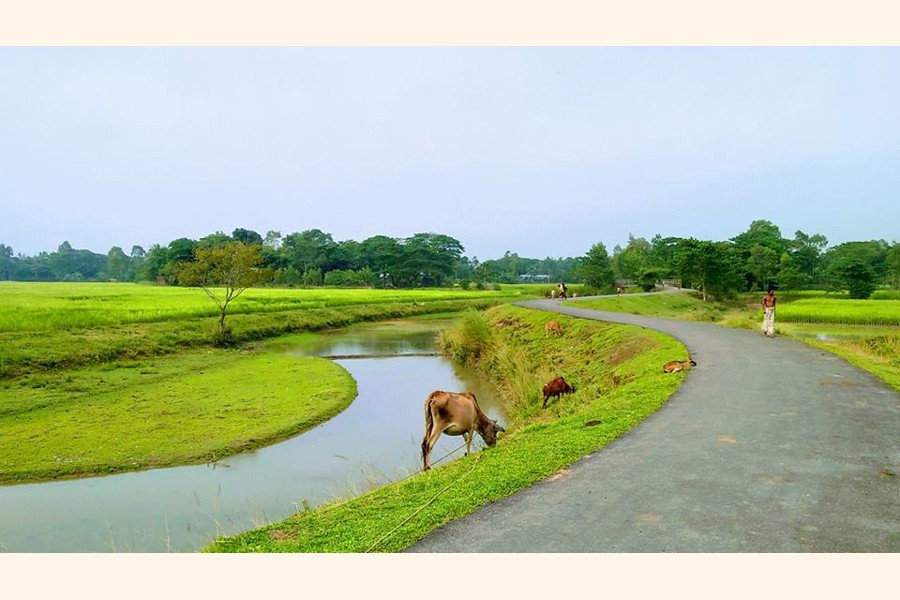 Disappearance of known rural Bangla has been taking place before our eyes but not many are aware of the transformation. The languid lifestyle in a picturesque rural setting where modest homes and huts nestle together amid profuse growth of greeneries is no longer the norm. Wild flowers inviting butterflies and bees, birds chirping from trees -some even daring to venture on the lawn to nibble at paddy sheaf stacked there or boiled paddy spread out for drying -provided the background of an idyllic life. Or, consider the milching cow from the cowshed lowing to announce that it was time for milking. Then again, the tolling bells tied around the neck of bullocks announcing the return of the herd to their sheds.

Such a picture has indeed become rarer indeed but a few remaining traces are still left somewhere. One such picture was carried in a Bangla contemporary on October 12 last. It presents a picture of cattle from a village called Char Laxmipur under Araihazar upazila grazing on a vast pasture ensconced between the village and the river Meghna. Every family has five to six cows of the local breed.

What is remarkable is that in the morning the most dependable domestic animals are let loose and they go to the meadow on their own, they need no herding. In the dusk too, they are not required to be guided home, they come back without human guidance. About 300 or so cows follow this routine day after day. So trained are the cows that they go together and return home together.

Such man-animal bonding is something unique. In ancient times when people lived in caves or forest, they started taming animals. At some point they found the dependence on each other mutually beneficial. However powerful animals like cattle and horses are, they have to survive attacks of carnivorous species. Man, although physically not as strong as a cow or a horse, is gifted with a superior intellect and by virtue of it, this species can prevail over the fiercest of animals.

Char Laxmipur is not far away from Narayanganj nor from Dhaka but its location right in the lap of the river Meghna has given it the added advantage of an expanded grassland full of fresh, green fodder for cattle so nearby. Clearly, raising cows for villagers there proves cheaper compared to other places because they don't have to spend on cattle feed. Green grasses are so fresh that there is no fear of feed adulteration.

There was a time when every village left some area of land fallow. The purpose was to grow grass there so that cattle from village could graze there. Those grass lands had their particular names depending on their locations. Local cowboys or masters of animals herded them there and back. Nothing to do, cowboys gossiped, played with cards, flew kites or indulged in some indigenous games and sports. Today's young boys would rather try their hands at cricket bat and ball instead of playing gollachhut, ha-du-du, dariabandha or danguli. But those cowboys loved the traditional games.

Traditional Bangladesh is fast disappearing in the face of aggressive modernity. Today roads and electricity have prevailed upon the exclusivity or isolation of villages. Modern gadgets too have infiltrated some of the homes there. Aggressive consumerism has also left its distinct stamp on village life. The magpie under the fig leaf has taken its flight for good. Fig tree is no longer considered economically viable. They are becoming extinct fast.

Thus bamboo clumps and cane bushes have taken leave of villages en masse. The few remaining are on their way out. How many children today know that cane fruit is mouth-watering when ripe? The marvel of bamboo shoot coming out in its magical splendour is a lifetime's experience.

It surely is a lost world that will never return back. The introduction of high yielding varieties of paddy made a whole lot of difference in the rural agricultural calendar. Now the mechanisation of agriculture is poised to expedite the transformation of village economy and lifestyle further. The jatra pala, pala gan, royani, bhawyia, kabigan are fading forms of culture and entertainment with little appeal. True, life changes but not all changes are for the better. Some of the traditional entertainment forms could be cultivated for fighting the erosion of values and moral degeneration spreading fast across the length and breadth of this small country.