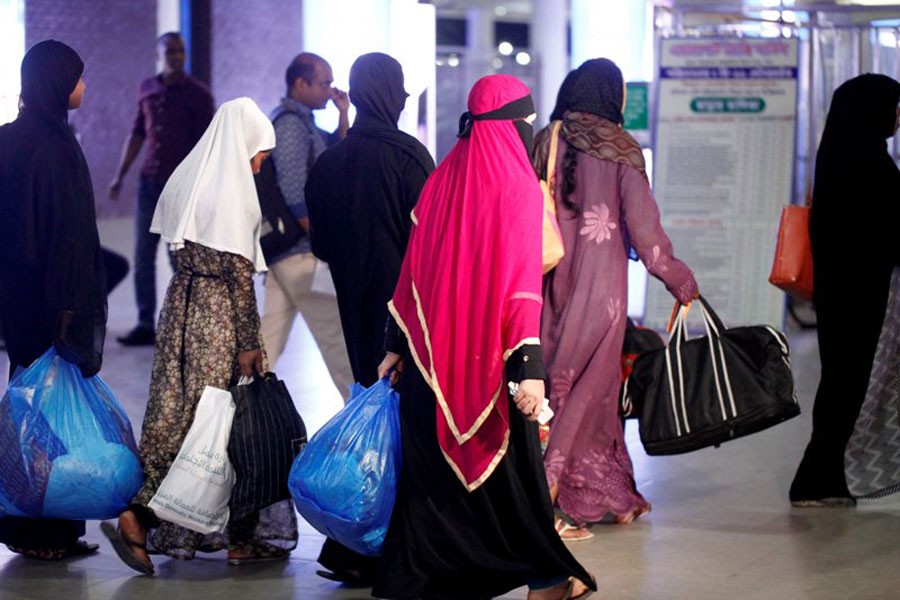 Suicidal incidents among outbound female house helps are growing over the years for factors like hostile working conditions. An estimated 44 Bangladeshi women committed suicide in the past three years, according to data available with the leading local non-governmental agency BRAC. Of the number, 23 women took their own lives in the 2018 calendar year, 12 in 2017 and one in 2016.

Besides, eight women have killed themselves in their job destination countries since February this year.

The highest number of bodies came from Saudi Arabia, Jordan, Lebanon, Oman and the United Arab Emirates, showed the stats garnered from the Hazrat Shahjalal International Airport in Dhaka.

But many families of the victims do not believe that their near and dear ones can commit suicide. The women might have been killed by employers or miscreants. Even notoriously poor working conditions might lead them to commit suicide.

The rising number of suicidal incidents among migrants abroad has really made rights campaigners sit up and take notice over the years. They have long been demanding proper investigation into what caused the female migrants to tread this pathetic path in foreign countries.

The working environment overseas is deteriorating with every passing day, forcing women to meet their tragic ends of life.

Analysing another list of the 124 bodies of the ill-fated from the welfare desk of the airport, it was found that most of the suicidal incidents are happening in Saudi Arabia.

Of them, 25 committed suicide as per the death certificates issued by the host countries. Seventeen bodies came from Saudi Arabia followed by four from Oman, two from Jordan and one each from Malaysia and Mauritius.

More than 0.8 million Bangladeshi women have been abroad with jobs between 1991 and April 2019, according to the Bureau of Manpower Employment and Training.

Experts said a large number of domestic workers went to Saudi Arabia with jobs following an agreement in 2015.

But many of them have so far returned home following exploitation and the number is still rising. They were tortured in many ways like denial of wages and sexual, physical and mental exploitations. Women also came from other Middle-Eastern destinations like Oman, Qatar, Lebanon and Jordan.

Jabeda Khatun, a domestic worker who was in her thirties and who hailed from Jashore, committed suicide in Saudi Arabia in January 2018.

Her husband Abdur Razzak spoke to her seven days before her death. She told him that she had done shopping for their daughter and a one-year-old granddaughter.

"But suddenly all stopped. I heard that she had committed suicide," he recalled.

Mr Razzak did not find any abnormality in her tone during their phone call before her untimely death.

"So, how could I believe that she had committed suicide," the traumatised husband told the FE.

The body of Nargis Akter (25) was sent home some eight months back from Jordan. But his brother Mainuddin is still to find the reason of her death.

"Nargis deposited money to purchase a piece of land," he reminisced and said she had a plan to return shortly.

But all her dreams failed to come true through her unnatural death, Mr Mainuddin said.

"Who had seen the incident?" he posed a question, saying that they accepted the certificate having no option to prove it.

"The women dying are mostly young," he said, guessing the unfriendly environment the victims had faced.

It is necessary to take full measures to ensure their protection abroad, Mr Hasan cited.

Sumaiya Islam, executive director Bangladesh Nari Sramik Kendra, said it is shocking that all the deaths are incidents of suicide.

It is hard to believe as there is little or no access to know about the working environment at the workplaces in the Middle-eastern countries.

As many women returned home tortured by their employers, particularly from Saudi Arabia, Ms Islam said, further post-mortem should be done on the bodies taken home to dispel this confusion.

"Because of overwork and unsafe working conditions, many get traumatised. It's a difficult situation that can push a woman to end her own life," she added.

Contacted, Zahid Anwar, deputy director (public relations) at the Wage Earners' Welfare Board, said if families apply for re-autopsy, it is possible here.

But the destination countries usually do not accept the reports of further tests, he said.