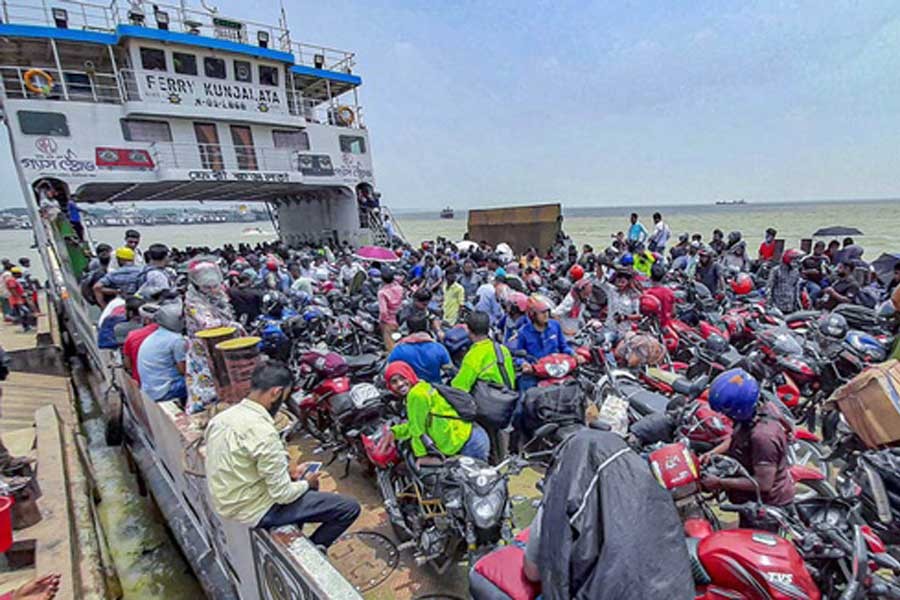 Even a few years ago, the number of people setting out for Eid-time home trips on motorbikes was just a handful. This unconventional travel was not for everyone, as it required a lot of courage as well as enough physical and mental agility to spend the whole travel time sitting upright. In short, it warranted a single biker's power of enduring the dread of making way through behemoth-like buses and other types of motor vehicles. A section of daredevil motorcyclists pioneered the journey. In the earlier phase, the trips were defined as being ones fraught with fears, especially the ones of being hit by a heavy vehicle. In time, with dozens and, later, hundreds and thousands joining the bikers' clan, the open-air trips began gaining popularity. When a section of young urban ladies expressed their willingness to accompany the male motorcyclists, most of them being their blood relatives, they were welcomed.

Thus two motor-bikers, one being a pillion rider, on a single motorcycle became a familiar view. At times a small child could be detected sitting in between the two adults --- in most likelihood their young parents. However, the person at the front clutching at the bikes' handles is a young male. As required by the traffic law, the adult passengers and the child or a teenager have to put on mandatorily their helmets. Apart from large and small buses, microbuses, taxis, cars etc, this year hundreds of motor-bikers --- single or accompanied by pillion riders, were seen moving in parallel on the highways. Later, after boarding a ferry connecting the two banks of a wide river, the vehicles in a chockablock state gave a weird look. Unlike the passengers inside buses or packed cars, the motorbike riders normally enjoy the facility of being in the open. Unless there are rains, these people can breathe in the river-swept fresh air.

According to a survey, one of the reasons behind the increasing numbers of village-bound people preferring self-driven or rented motorcycles is the freedom enjoyed during long travels. Many claustrophobic people dread on being seated inside a speeding bus, doors shut with no facilities for stretching out the legs. Even at tailbacks or on ferries, other vehicles make it impossible for them to set their feet outside. Citing these inconveniences, the motor-bikers have the reasons to point out their comfort they enjoy on the two-wheelers. In the last couple of years, the number of highway motorcycles almost trebled since their shaky start. In place of the lone biker with a backpack, nowadays small families are found speeding past the stifling highway gridlocks and long tailbacks. In place of small- and mid-distance trips, Eid vacationers are fast picking the trends of reaching destinations far away from the capital and its outskirts. These days Dhaka-Rangamati, Dhaka-Khulna, Dhaka-Sylhet, Dhaka-Rangpur or Dhaka-Panchagarh travels by motorbike have become routine trips.

Given the rush of passengers eager to travel by non-AC or AC buses, despite the drastic cut in travel time thanks to the opening of multi-lane highways, flyovers and expressways, a section of people find the exclusively used motorbikes more convenient for travel to destinations. Many people travel by open motorcycles just to breathe in the fresh air. While on a spacious highway, the heat of the high-noon sun doesn't seem that unbearable on the skin. A great advantage of travelling by motorbikes is one's capability to avert collisions, minor or fatal, with recklessly driven larger vehicles. Thanks to their lighter weight and maneuverability, expert motorcyclists earn the ability to keep themselves out of the harm's way. The number of these two-wheelers is expected to continue rising in the coming years. Deluxe buses or high-end inter-city trains cannot detract from their rising popularity. Self-driven motorbikes save crowd-avoiding people from the hassles of collecting advance tickets. The exponentially increasing number of motorcyclists backs these facts. On a full day prior to Eid, a total of 39,255 northbound vehicles crossed the Bangabandhu Bridge. Of them, 7,862 were motorcycles.

Of many better aspects of the motorbike rides home, the one that stood out prominently during the last village-bound and return trips was the riders' satisfaction. It stemmed from the fact that the incidence of road accidents was amazingly low. The highway police and the law enforcers at the ferry points had been found extending their cooperation to the motorbikes. Likewise, in a deviation from the normal scenes encountered in the large and congested cities, the operators of relatively larger vehicles were found giving the required space to the tiny two-wheelers. Spectacles like these were heartening. But an irritant caused many to feel uneasy.

As they continued to feel happy with the disciplined movements of the pillion-riding motorcycles, an insidious misgiving kept haunting them. Many felt confused at the dreadful thought of finding the motorbikes in their previous reckless movements once they are back in the capital. Yet there are hardened optimists who have already given clean chit to the commercial bikers. They have firm belief that following in the long-haul Eid-time bikers' suit, the motorcycles operating under the supervision of private companies like 'Pathao' etc, might start abiding by traffic laws and rules. It's because they have seen on the TV the cooperation the traffic police personnel extend to the law-abiding bike-riders --- especially at the points of gridlocks and while they board the ferries and roll out from them in all possible orderly ways. These scenes cropping up during the motorbike journeys home are expected to leave positive impacts on the two wheelers' reckless movements in the Dhaka metropolis. One wishes the motorbikes' speeding along the highways, and their myriad types of performance at the ferry-points showed the early signs of their orderly movements in the cities in the future.