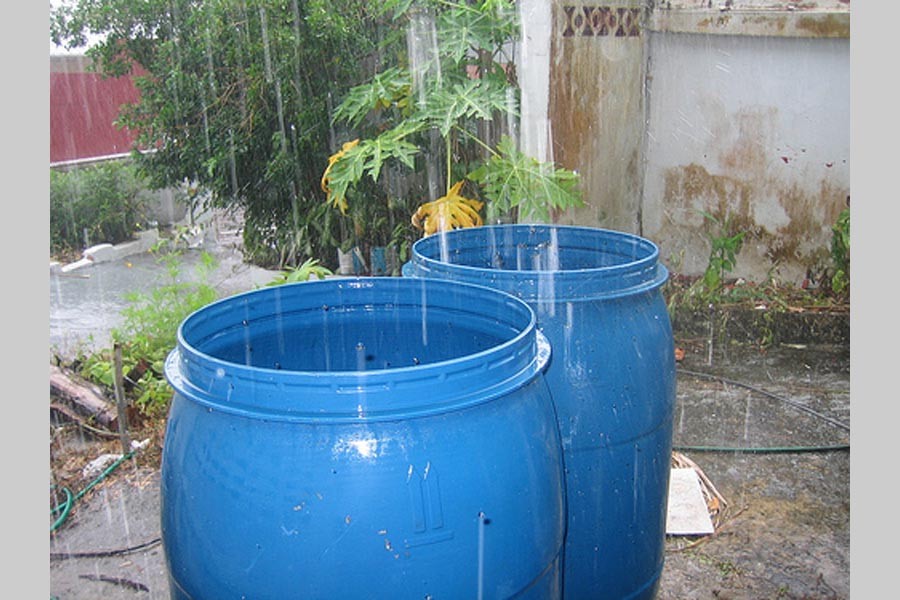 As the rainy season is fast approaching with the Bangla month of Ashar barely a week away, the country is likely to experience refreshing showers in the coming months. Despite its apparent abundance during the monsoon, water these days is precious -- too precious to be wasted, and in reality, increasingly scarce to be wasted. Water management has thus assumed an extremely important role as it relates to one of the most critical of the human needs -- water security. While we speak of food security, we tend to forget that the security of water precedes the security of food for the simple reason that the grains we call food are fed on water.

Every year with the beginning of summer we are routinely faced with two perennially worrying problems -- water and power. The frequent cuts on power supply seriously affect irrigation as watering the standing crops is a supreme priority at this time of the year. But this is only one side of the problem. While the irrigation requirements are barely met with the diverted and inadequate supply of electricity, the casualty on the other side is the availability of water in urban locations in the country. There is not enough flow of water to rush into the overhead or underground tanks meant to be reservoirs to meet all kinds of household needs. In the capital Dhaka, ground water level is falling at an alarming annual rate of around 3.0 per cent, experts say. Unsustainable extraction of fresh water and other human interferences with the water cycle is the immediate cause of water scarcity. Over-extraction has its most direct manifestations on the level of aquifers and underground reserves. If withdrawals exceed the natural rate of recharge, the level of an aquifer will fall, eventually drying up altogether.

For sometime now, there has been an increasing emphasis on storing rainwater - better known as rainwater harvesting --  during the monsoon. In simple terms, rainwater harvesting is the accumulation and storage of rainwater for reuse before it reaches the aquifer. It can be used to provide water for various typical household uses and small irrigation. Rainwater collected from the roofs of houses can make an important contribution to the availability of drinking water as well.

Rainwater harvesting systems are simple to construct from inexpensive local materials and are potentially successful in most habitable locations. Roof rainwater may not be potable and may require treatment before consumption. Since some rooftop materials may produce rainwater that would be harmful to human health as drinking water, it can be useful in flushing toilets, washing clothes, watering the vegetation and so on. There are several types of systems to harvest rainwater, ranging from the very simple home systems to complex industrial systems. The rate at which water can be collected from either system is dependent on the plan area of the system, its efficiency and the intensity of rainfall.

It is indeed curious to note that in the Indian state of Tamil Nadu rainwater harvesting has been made compulsory for every building to prevent ground water depletion. It produced excellent results, and few other states were quick to replicate the model. Since the implementation, a neighbouring state Chennai saw 50 per cent rise in water level in five years and the water quality also improved significantly. Harvesting method varies from country to country depending on the uses of rainwater, and technologies applied for storing and purifying are also diverse.

According to experts, rainwater could be a prospective source for a variety of uses in our country. The methods, depending on the variability, may not be as simple as it sounds, and will surely require expertise and some serious planning. Many of us may not be aware that Dhaka WASA undertook a rainwater harvesting scheme in 2009, but the scheme did not progress. Lately, however, the WASA authorities are said to have undertaken an action plan to recharge underground aquifers. Similarly, the Rajdhani Unnayan Kartripakkha (RAJUK) is contemplating on the amendment of the Building Construction Rules-2008 incorporating a mandatory provision for harvesting of rainwater for all upcoming building structures in the city. As a starter, we may try to replicate the easiest and cheapest of the methods and see how it works. Non-governmental organisations (NGOs) will be very well placed to give it a try in the rural areas where they have a network of working with the people in a host of areas. Experts are of the opinion that with an average 2000 mm of annual rainfall in the country, the government can take up a policy to sensitise the people on the use of rainwater in the wake of potable water crisis.

There are reports of stray moves in the southern region of the country to harvest rainwater, but in the absence of required support including strong advocacy to sensitise the people, these have fallen short of the expected outcome. Given the proven benefits of the system, it is imperative that the government, especially the local government agencies, embark on a country-wide programme to encourage harvesting of rainwater during the monsoon as a viable means of mitigating water scarcity to a great extent.