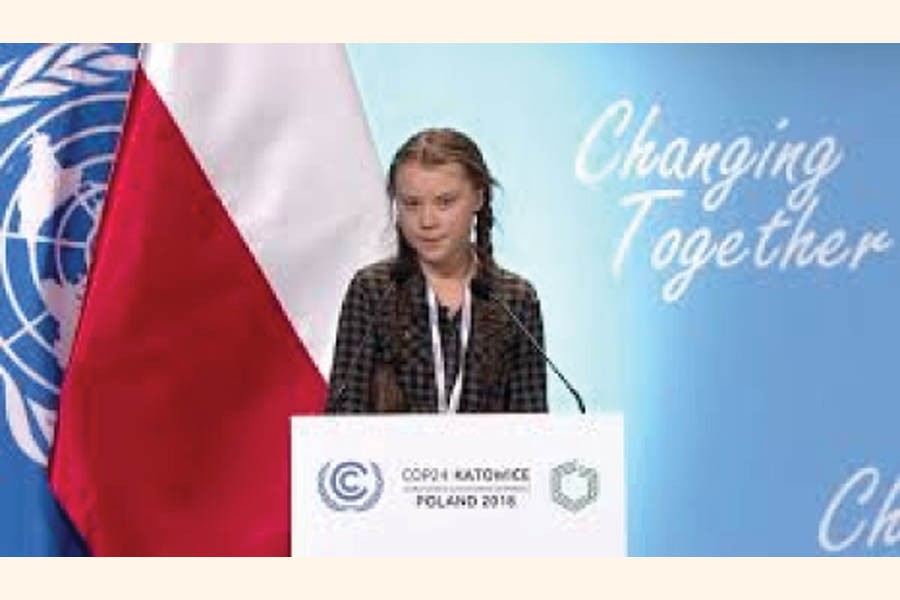 Greta Thunberg speaks truth to power at the UN COP24 climate talks on December 15, 2018: "Even as a 16-year-old shakes, rattles, and rolls 60+-year-old policy-makers towards more collectively beneficial environmental policies, we continue to refuse to blink."               —Photo credit: YouTube

Even as the global economy keeps shrinking this year, key political leaders stubbornly refuse to gulp and take one step back so we can all move forward next time. Even as a 16-year-old shakes, rattles, and rolls 60+-year-old policy-makers towards more collectively beneficial environmental policies, we continue to refuse to blink. Something pathologically wrong continues to be institutionalised, even amid dismay and detriment.

Humans have a habit of preferring second-best options over the best, preferring instant enrichment over the delayed, sometimes even if greater pay-offs favour the larger long-term option. Yet, as we approach multiple environmental tipping points, we might pause and reconsider our choices: when our menu of global resources was ample, why overflowing, we splurged, converging coke and coal, for example, as well as diamonds and gold into our own, seemingly ever-growing personal wealth; then when scarcities stared us in the face, we dug deeper into our own, personal mines to continue with our hoarding instinct, this time with new get-rich resource. We almost always have the chance to balance input and output, trim our consumption to our need levels, and above all, reconvert the leftovers of our usages, that is, the waste, back into viable inputs. We have historically stopped short constantly, our greed outpacing our saner thoughts. No wonder we have reached the brink, an exhaustion of the most valuable earthly resources, almost to the point of mankind having to return to the civilisation drawing board to avoid the harder option of searching for another planet with fresh resources.

That has never happened in human history, to redraw the fine-line between consumption and production so as to enhance conservation or continued circulation: every 'wonder' of the world, ancient, old, and new, lavishly project some finite materialistic pinnacle, as if the more the accumulation, or brighter the vision, the depth of fear-driven protective measures would guarantee a similarly enhanced after-life. Whether it is the Pyramids or the Great Walls, they carry the fingerprints of the 'fittest' to have survived constant warfare, usually against all odds, leaving a giant footprint of a resourceful devouring machine attracting others.

It is only with the advent of automation and artificial intelligence (AI) under the Fourth Industrial Revolution that we begin to see the instruments of reining in our lascivious materialistic instincts. With them, we see light at the end of every vicious cycle: whether it is input-output, consumption-production, resource-waste, in short, gluttony-conservation based. That perennial social question, "Will the circle be unbroken?" may now have an intrinsically loaded and resounding environmental/ecological equivalent: yes, it is possible if we deploy those automated machines to curb our over-reaches. It is the circular economy.

At the heart of a circular economy is balance or proportion in what we do to come to terms with our instincts. Initially we took the coal and burned it to keep ourselves warm, finding it so much more efficient than, say, chopping wood to fuel the fire. Likewise with petroleum, it was so much more inexpensive that we actually built ways to consume more of it rather than appraise the spiralling leftover costs: from manufacturing automobiles and airplanes, we ended up building a tourism industry which, even if automobile production and airplane construction completely stopped, we would still be releasing more carbon into a fragile atmosphere. It is good we learned of ozone depletion, that too, much belatedly, since that acts as some form of a speed-bump in our personal aggrandisement crusade. Many such speed-bumps drew attention of mankind at large, down to the very worrisome crusade Greta Thunberg launched earlier this year, but our greed still won the day, and dictates the net balance: some countries legislate penalties on abusing the earth's resources, but they always drop like kingpins against the majority of determined materialistically marching countries.

This is why, with automation and artificial intelligence, we can now draw a face of environmental polluters, and track every earth-produced resource, from extraction to final disposition, thereby isolating the one person or persons thwarting its circular movement. We have all heard so much about plastic being non-biodegradable, and how ocean-dumping them have invaded fishes, and thereby our own blood-stream, muscles, and organs. Now we can tag every plastic made, used, and dumped, and with some ingenuity, collate the buyer, consumer, and seller to impose the penalty.

Of course, this is not automatic. Not all governments will do it, especially when an income is even remotely possible. Yet, there are others too keen to intervene, a group growing in numbers. These are the future adults that Greta mobilised, who, no doubt, will inherit a far more constrained and contaminated world than any previous generation, even worse, with less to flaunt the symptoms of modernity than in the past. Who threw what plastic bottle in the river can now, at least theoretically, be determined through various scanning facilities, just as which automobile is spewing more carbon ingredients than others can also be quickly identified and instantly penalised. Drones can capture who is actually logging trees down illegally in a forest, even which specific fish may have too many plastic ingested (either micro-plastic or any of the 77 other types) to become a viable or healthy human meal.

These are examples of the multifaceted means available now that can be deployed against abusers and illegal environmental traffickers. That there is a growing population keen on correcting such abuses can be used as a cocktail against those abusers and illegal environmental exploiters. Such an opportunity never existed to this extent as today, although the global distribution of this group may be too skewed. This pits privileged zones against less-privileged counterparts. Putting the emergent environment-enhancing instruments to usages of all sorts cannot but unleash the much needed remedial opportunities we badly need.

One of the key byproducts would be the evolution of a circular economy, in similar fits and starts, globally. Recycling would become the dominant production/consumption driver. Even a small start can have rippling effects, as noted by Leanne Kemp ("Here's how a circular economy could change the world by 2030," World Economic Forum, Newsletter, October 29, 2019): the net effect of wastage being recycled would reduce the need for dumpsters, while opening new jobs from the recycling plants; costs would fall commensurately, and though this might boost consumption, the movement towards recycling would benefit from the new type of consumption, for instance, those altering packaging, thus extracting fewer of the earth's resources, and pushing particularly clothing buyers to adjust to both bio-degradable materials and the instinct to refrain from buying new clothing, as for Eid. One can let the mind flow how the circular economy could enlarge its compass, until at last it would not have to compete with a rival economy.

In turn, with fewer resources extracted, greener global tones mesh with the world, leaving for the ongoing software revolutions to produce more facilitative technologies, such as from nanotechnology and internet of things (IOTs). The end product would be a replacement of the vicious cycle alluded to previously by a virtuous cycle: every new development feeding another before ricocheting back and forth constantly for everyone's benefit.

Whether that becomes a pipe dream or not severely pits our raw instincts against our innovative capacities, the beast within us against the brain.