Living with Covid-19 in the USA 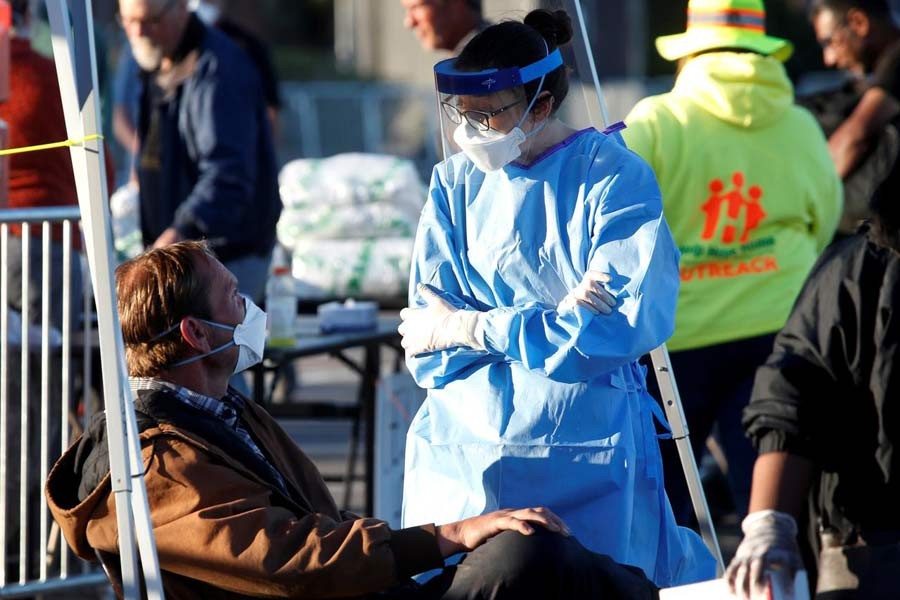 A medical student from Touro University Nevada talking with a man in a temporary parking lot shelter, with spaces marked for social distancing to help slow the spread of coronavirus disease (COVID-19) in Las Vegas, Nevada, US on Monday. There have been 3,415 COVID-19 deaths in the US, more than the 3,309 reported officially in China as of Tuesday. —Photo: Reuters

We live in a town some twenty miles away from the capital city, Washington DC and about ten miles from the Pentagon. This is a cosmopolitan neighbourhood. Many residents commute to the DC and Pentagon for work five days a week either by bus or metro train or  both. Travel time ranges from 30 minutes to an hour.

Living in the DC would require staying in two bed room apartments in high rise or multi-storied buildings, with no backyard lawn, no reserved car parking. House rent is conspicuously higher. All these factors led people with families to stay in the areas not far away from the DC. Ours is one such neighbourhood.

We have been living in the neighbourhood for the past ten years. Banks, pharmacies, post office, grocery stores, shopping malls, hospitals, mosques and churches are within 30 minutes' drive. Reagan National Airport is also nearby. I know many in the neighbourhood though not by name, but I would hardly miss a face.

In the early morning I could see through the window children queuing up in front of my house for the school bus to arrive. During the winter kids would wrap them with layers of apparel and jackets to keep themselves warm. In the afternoon, the school bus would return, and the kids would rush to their homes. In the weekend, the neighbourhood would take a festive look; kids would play basketball, run, scream and fight. In the evening, parking lots would be full as guests assembled for dinner parties. All these have disappeared as the coronavirus reached the east coast in end-February.

Coronavirus, also known as Covid-19, came to the news in early January when the Chinese government disclosed that the virus had infected thousands in Wuhan province and many had already died. The Chinese officials also announced that massive efforts were underway to contain the outbreak. It mobilised huge workforce and setup two hospitals in the affected zone in seven days time, imposed blockades and restricted travel to and from Wuhan. Other cities also came under travel restrictions. Thousands of doctors and medical personnel were deployed to test and then treat the persons showing symptoms of infection.

Scientists and medical experts in the US warned in December that the deadly virus posed a serious danger to the population and suggested precautionary measures. President Trump, however, dismissed it as hoax and predicted that it would go away like seasonal flue. On January 21, when the virus struck the Washington State, the administration found itself totally unprepared. Trump announced that he would lead a team of experts and assist the State Governments to contain the pandemic. The administration issued basic guidelines including observance of social distancing but fell short of specific actions. He then announced that he would take no responsibility of the catastrophe and advised the Governors to take lead in combating the pandemic in their respective states. Trump declared a state of emergency in early March and pledged to supplement the efforts of the state governments. But by that time the virus had affected the major cities and was spreading further. As on March 31, over 184,000 people got infected in 50 states and the death toll exceeded 3,800. Scientists warn that the situation will get worse before it would get better.

As the pandemic has been taking its toll, a dismal picture of American backwardness has come to light: "Amongst the 36 wealthy nations under the Organisation for Economic Cooperation and Development (OECD), the US had the second highest poverty rate, the highest level of income inequality and the highest level of obesity in 2016. The US is below average on renewable energy, infrastructure investment and voter turnout. The US is the only country among OECD countries that doesn't mandate paid family leave. We lead only in gun violence. The homicide rate is 50 per cent above the OECD average. On health coverage, the situation is no better - in 2018, 27.9 million people lacked health insurance, child mortality in the US is the highest in OECD and life expectancy is below average. We have far fewer per capita hospital beds than other advanced democracies (2.4 compared with 12.2 in South Korea), which makes the US highly vulnerable to a pandemic."

The State governments could have initiated preparatory work including mobilising resources, equipment and materials from mid-January. They could have without much difficulties established makeshift hospitals, clinics, testing sites and trauma centres to cope with possible influx of infected persons. The state governments had the resources and manpower to put in place contingency arrangements. But they, for inexplicable reasons, took little preparations and when the catastrophe struck, they cried foul. At the Federal level, the members of the Congress devoted much of January and February in pursuing the impeachment motion knowing well that it would not get required votes in the Senate to indict the president. Members of the Congress instead of working with the Federal Government to allocate more resources to the state governments to equip public health service, wasted precious time in striving to dislodge the president. The Federal government and the state governments cannot absolve themselves of the responsibility for letting the healthcare system under-funded and consequent death of hundreds of people.

After weeks of piecemeal unmoored actions, State Governments imposed restrictions on the movement of residents and shut down shops, restaurants, bars, theatres and advised non-essential employees to work at home. People have been advised not to visit parks and beaches and maintain social distancing. In New York, National Guards have been deployed to assist setting up of adjunct hospitals and transportation of medical supplies.

New York, California and Illinoi have been worst-hit. Governors of these states have urged the Federal government to nationalise the procurement of medical supplies like ventilators, beds, gloves and masks as the hospitals have ran out of the stocks. Governor Andrew Cuomo from New York sought the intervention of the Federal government as the states ran into competition in the procurement of medical items and equipment which resulted in soaring of prices. He urged the president to use his authority and compel the producers to manufacture the items in massive scales. The frontline "Care Givers" are using same "masks and gloves" as shortage intensified. The hospitals have been overwhelmed - newly admitted patients are in beds lying in the corridors of the hospitals. The supply chain hasn't yet been geared to cope with the situation. In the meantime, Louisiana and Michigan have joined the highly infected states.

Conflicting signals are coming from the highest level of the government regarding easing of travel restrictions. The President believes shutdown for prolonged period is not a panacea. Instead, he suggested a robust surveillance and categorising counties across the United States into low, medium and high-risk levels and people from low infected areas should be allowed to resume business as usual. Trump maintained recrudescence of economy is of paramount importance and people should be allowed to return to work in stages, as soon as the Easter ends. But scientists disagreed. They argued rolling back travel restrictions and allowing people to return to work will water down the containment drive before it has gained momentum. Trump yielded and on March 29 announced that federal social distancing guidelines would last through April 30.

The devastating impact of covid-19 can hardly be overestimated. Last week, a record of 3.3 million people sought unemployment benefit while in February the Labour Department reported that about 129,000 new jobs were added in the economy. The economy is now on the slide and a recession is inevitable. Economists warned that a massive unemployment spike could result in more than 40 million people losing jobs by mid-April.

The Congress has passed a massive $2.0 trillion stimulus package on March 27 and on the following morning President Trump signed the bill known as Coronavirus Aid, Relief and Economic Security (CARES) Act, Phase Three. Earlier, the Congress had passed $8.3 billion Coronavirus Relief Bill and $100 billion Package for paid sick leave, unemployment insurance and virus testing. The Internal Revenue Service has been authorised to send $1,200 per adult and $600 per child to more than 150 million households. Unemployment benefit of $600 per week will be provided for four months. An amount of $500 billion has been earmarked for states, cities and companies, $367 billion to small businesses, $130 billion to fund unemployment insurance and upgrade hospitals. The bill has also sanctioned $50 billion for the Airlines, $8.00 billion for cargo airlines and $17.00 billion as loans to industries deemed pivotal to national security. Agriculture department would get $50 billion. State Department, USAID and others have been allocated $1.5 billion as international assistance.

The stimulus package will go a long way to help the people in need, reactivate small businesses, uplift the healthcare system and resurrect the economy. Let's pray for quick and total extinction of covid-19.

Abdur Rahman Chowdhury is a former official of the United Nations. darahman.