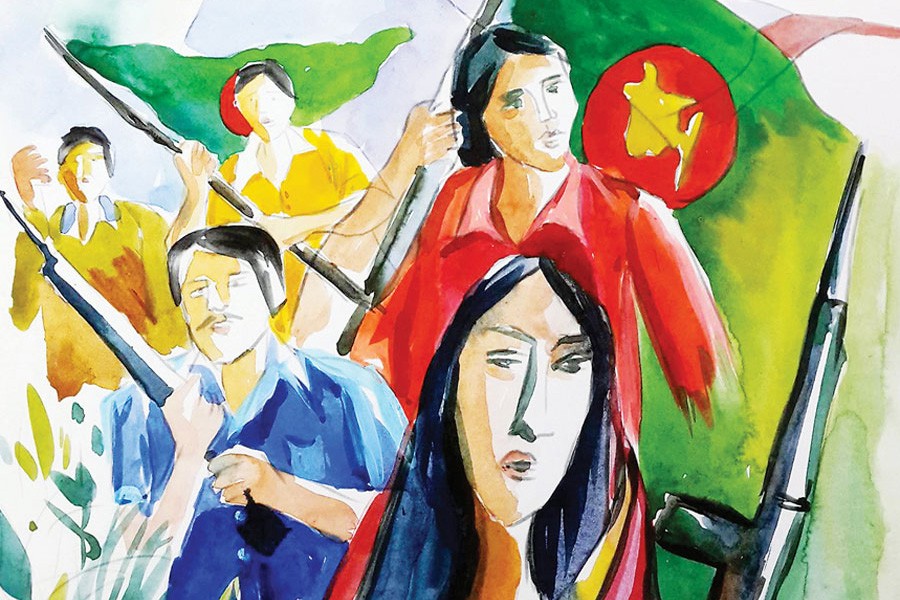 The outstanding academic performance of Syed Mainuddin Ahmed allured his parents to let him take admission to the Dhaka Medical College in 1964. This was a period when the students of the Dhaka University became increasingly intolerant of authoritarian rule of President Ayub Khan. The 1965 war with India posed a serious challenge to Pakistan's territorial integrity. During the seventeen days' war East Pakistan remained totally unprotected. Foreign Minister Zulfiqar Ali Bhutto brazenly announced in the National Assembly of Pakistan that East Pakistan was saved from Indian aggression by China. Though the Tashkent agreement, concluded in 1966, restored a semblance of normalcy between India and Pakistan, people in East Pakistan continued to suffer from deprivation and neglect. Bengali economists had pointed out growing economic disparity between the two wings and demanded revision of the second five-year plan allocating resources on the basis of population. The government acknowledged economic disparity between the two wings but formulated the third five-year plan without corrective measures. The Bengali economist rejected the third plan with circumspection that it would further aggravate economic disparity between the two wings.

At the all-party conference in Lahore in February 1966, Bangabandhu tabled the historic Six Points Program demanding full autonomy for East Pakistan. This was rejected by other opposition parties and the government resorted to repressive measures against Bangabandhu and the Awami League. Two years later, the government lodged Agartala Conspiracy Case against a group of Bengali civil and military officers alleging that they had conspired to secede East Pakistan from the rest of the country. Bangabandhu was made "number one accused" in the case. A special tribunal was set up to adjudicate the case. A building inside Dhaka cantonment was chosen as the seat of the tribunal.

As the trial began, accused one after another, narrated horrendous tortures they had been subjected to in the military custody. The daily newspapers in Dhaka published the narratives of the accused. People were dismayed at the brutality the Bengali prisoners had undergone.

Students of the Dhaka University formulated "Eleven Points Program" incorporating the "Six points Program" and launched a movement in January 1969 demanding abrogation of Agartala conspiracy case and release of political prisoners. The movement soon transformed into a countrywide movement and the government was forced to withdraw the conspiracy case. Political prisoners were released. President Ayub invited opposition parties for dialogue. The dialogue failed, Ayub Khan resigned and transferred of power to General Yahya Khan. Yahya Khan promised general election and transfer power to the elected representatives at the earliest.

In this tumultuous political atmosphere, Mainuddin pursued studies and successfully obtained MBBS degree in 1970. He applied for a job in the medical corps in the Pakistan Army. He was interviewed at the CMH in Dhaka and was appointed as a Medical Officer in 40 Field Ambulance at Comilla Cantonment on December 4, 1970. He became Lt. Mainuddin.

In the general election held in December 1970, Awami League, much to the surprise of the intelligence agencies, scored a landslide victory. It won 160 out of 162 seats, allocated to East Pakistan and emerged as the single largest political party in Pakistan National Assembly. Following the election, civil society, cultural organisations, intelligentsia, student organisations made no secrets in demanding separation of East Pakistan. The political culture had undergone a radical transformation. What had been a topic of closed door discussions a few years ago, became an open forum dialogue.

In February 1971, an Indian Airlines flight was hijacked to Lahore and at the instigation of Bhutto the aircraft was blown up. India, in swift retaliation, suspended Pakistani aircraft flights over its air-space. Consequently, PIA and Pakistan military aircraft were forced to fly via Colombo and a two-hour inter-wing flight became a six-hour long flight. People began to suspect that Bhutto, in collusion with the military, was conspiring against transfer of power to the Awami League leadership. Bengali Civil Aviation staff confirmed that the army was reinforcing its strength in East Pakistan by transporting military personnel and hardwire from West Pakistan.

Lt. Mainuddin and his friends were getting weary and they used to discuss the deteriorating situation among themselves. They were looking for guidance but there was nobody to guide them. In February, he was transferred to 31 Punjab Regiment at Khadimnagar, Sylhet. It was an isolated place located about twelve miles away from the town. People were getting nervous at the lack of progress in the Yahya-Mujib parleys held in Dhaka. In the meantime, Bhutto began making incendiary statements claiming that no constitution could be framed without the acquiescence of the Peoples Party and threatened MNAs, elected from other parties in West Pakistan, against reaching a compromise with Bangabandhu. People came out in exasperation on March 01 at Yahya Khan's postponement of the session of the National Assembly. Tension was also felt within the cantonments. Bangabandhu virtually declared independence on 7th March. Lt. Mainuddin and his friend Captain Mahbub considered it as a final declaration.

On March 27, Police and EPR Headquarters in Sylhet were attacked by Pakistan Army but retreated following tough resistance. Mainuddin and Mahbub attempted to escape at midnight on April 01. They crawled some distance but were caught by the soldiers. They were blindfolded and locked up into a small room for three days; every moment they were expecting the worst. On the fourth day, they heard a knock and the door got opened. A soldier fired at them - both fell to the ground. The soldier thought the victims were dead. Their bodies were left at the balcony of Sylhet Medical College Hospital. The doctors and the medical staff there treated Mainuddin and Mahbub with utmost care. Captain Mahbub succumbed to injuries in the afternoon. Mainuddin made steady recovery under the supervision of Dr. Shamsuddin Ahmed FRCS, Chief of Surgery.

On April 15, Mainuddin took leave of his parents, crossed the border and joined the Mukti Bahini in Ashram Bari, Tripura led by Captain Aziz, later became Major General. His responsibility included treating the wounded, transporting the injured requiring surgery to nearby Indian hospital and manage the makeshift clinics for the freedom fighters. He took military training whenever got some time. Mainuddin would always carry a 'short machine gun' when he would accompany the freedom fighters to the battle fields.

On April 17, Bangladesh Government took oath at Meherpur, Kushtia. The formation of the government provided much needed legal coverage to our armed struggle. Prime Minister Tajuddin Ahmed, in his speech, declared, "The united Pakistan lies buried under the mountain of Bengali corpses."

In October, Mainuddin moved to 11 East Bengal Regiment led by Captain Nassim (Later Major General) in Montola, Tripura. He set up a 12-bed makeshift hospital and formed a team of paramedics to provide emergency services to the injured freedom fighters. Mainuddin observed an enhanced exuberance in the freedom fighters when he would accompany them to frontlines.

On December 06, 11 East Bengal Regiment was instructed to proceed toward Brahmanbaria. On the way they attacked the retreating Pak army and inflicted significant casualties. But at Chandura, they confronted a retreating convey who were fully armed. Consequently, a serious battle ensued, seven freedom fighters embraced martyrdom. A Havildar shouted at Mainuddin and said, "You are being shot - move out". Mainuddin jumped into a ditch but a bullet pierced through his right leg. In this battle, his close associate Mujib was killed. Captain Nassim was also seriously injured. Mukti Bahini killed 27 Pakistani soldiers and captured 13. Sector Commander Major Shafiullah (later Major General & Chief of the Army) also suffered injuries in Chandura operation.

Mainuddin was longing to attend the surrender ceremony in Dhaka but gave up as he was incapacitated. He moved to Habiganj and joined 2nd East Bengal Regiment led by Captain Ejaz. He visited his parents, stayed a few days with them and returned to Dhaka on December 20.

Mainuddin became Captain during the war and Bangladesh Government decorated him with "Bir Pratik". In April 1972, Captain Mainuddin joined the CMH, Jessore. CMH was completely looted. He was asked by Major Manzoor (later Major General) to restore the CMH. He went to Calcutta and managed to procure essential equipment for the hospital. Mainuddin was transferred to Comilla CMH in mid-1973.

The assassination of Bangabandhu on August 15, 1975 came as a profound shock to Mainuddin. He went on voluntary retirement on December 04, 1975 and left the country. Captain Syed Mainuddin Ahmed Bir Pratik now lives in Virginia, USA with his family.

The writer is a former official of the United Nations.
darahman.chowdhury@hotmail.com