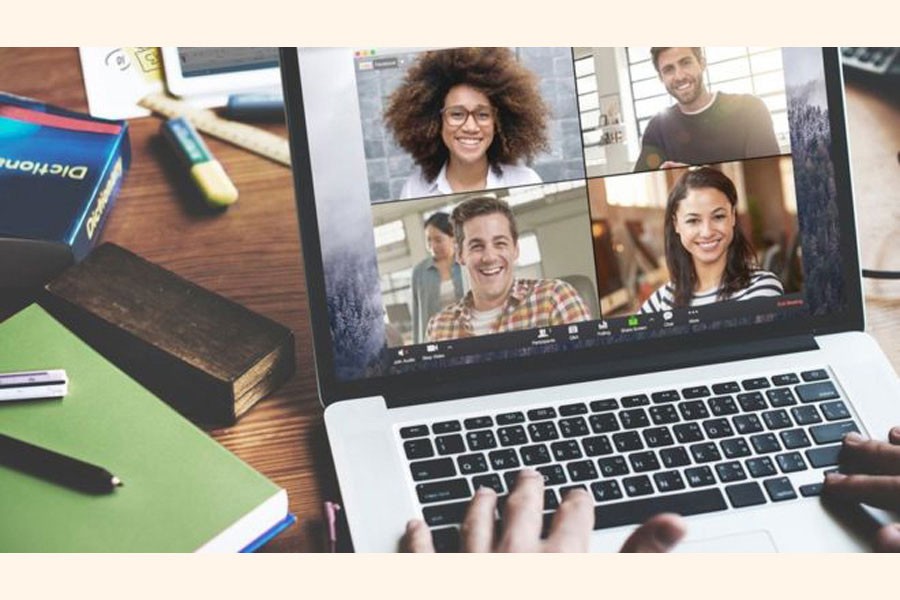 In this Covid era, we have been getting used to with many things as a means of survival strategy. Starting from wearing masks, sanitising hands to maintain social distance, the list is growing. As a result, there has been demand for new tools to keep us safe. To keep us productive as well, while we are staying home, there has been an increasing popularity of some other tools. One of them is Zoom-a video conferencing software. From school going students to leaders, everyone is getting used to with Zoom. Even moms assisting their toddlers to join playgroup sessions are also using it.

Zoom has become our new means of hosting classrooms, business meetings, social get-togethers, and medical counseling. The list goes on. The sudden growth of the role of Zoom from being an auxiliary communication means to a vital tool of getting our essential jobs done has skyrocketed Zoom's market valuation close to $50 billion-making Zoom now worth more than the World's 7 biggest Airlines. In just over a span of five months, the share price has jumped from $70 to $175-hoping 250 per cent jump. Zoom has also outperformed well known competing software applications like Skype or WebEx. Moreover, our virtual presence over Zoom is also raising privacy and security concerns as well. From this Zoom's miracle growth, here are some of the lessons worth pondering on.

I. PRODUCTS ARE HIGHLY VULNERABLE AT AN EARLY STAGE: Prior to the arrival of Zoom, Skype and WebEx, among others, were popular video conferencing solutions. To consolidate the position of Windows Live Messenger, Microsoft acquired Skype for $8.5 billion back in 2011. During Covid-19, why Skype - which for nearly two decades has been the de facto app people used to keep in touch via video -- did not become a natural choice for businesses to communicate? Another poster child is WebEx, acquired by Cisco in 2007 by paying $3.2 billion. Eric Yuan, a former Cisco WebEx engineer, founded Zoom in 2011 and launched its software in 2013.  Being a latecomer, how did Zoom overtake Microsoft as well as Cisco?  At the early stage, technology products (particularly software-intensive) are highly amenable to redesign through the flow of ideas. For being cloud-based software application, Zoom developers had the option of adding as well as enhancing features at a rapid space for making it increasingly better to get the job done better. The Start-up culture of the Zoom team might have been very helpful for such a quick response to meet rapidly evolving demand (both volume and features) of video conference during Covid-19.  On the other hand, Skype and WebEx are managed by corporate bureaucracy, often less agile, and slow to respond to rapidly evolving market need--particularly during the crisis period.

II. GLOBAL MONOPOLIES TO TAKE OVER LOCAL COMMUNICATIONS: From toddlers to senior citizens, everyone is basically getting used to with Zoom. Zoom's R&D team has been continually updating the software to serve the evolving communication need. And it's free for communicating with few people over a short span of time, say hosting a meeting with up to 10 people over 30 minutes. Data cost is virtually negligible. Zoom makes money from corporate clients for hosting an extended meeting with a large group of participants. Due to the cloud-based software platform, Zoom experiences high-level scale advantage. On the other hand, due to Covid triggered familiarity, Zoom is also gaining an externality effect. It's likely that Zoom will also grow as a strong substitute for telephone conversation and conference. As a result, Zoom may grow as a global monopoly taking over the local communication market. Such likely uprising of Zoom raises policy and regulatory issues pertaining to governing competition and also the Government's revenue collection from the communication industry.

III. PRIVACY AND SECURITY IN DIGITAL SPACE: Unlike conventional telephone calls, communication over Zoom takes place in the data domain, voice over internet (VoIP). VoIP communications are highly vulnerable to interception, unauthorised recording, and also manipulation. Already, there have been questions about this issue-giving rise to "ZoomBombing." If Zoom like global platform grows as a major communication means, how should we ensure data privacy and security? What should be the role of national governments to look after this issue? With the given urgency of having essential work done in the virtual space, there is a tendency that people are paying less weight to security threats in making decisions. But, over time, the abuse of security loopholes may lead to a quite high loss for society. Recent pew research finds that the majority of Americans think that personal data is less secure now, and data collection poses more risks than benefits. This security issue should be addressed to minimise the cost of this technology-led transformation of society.

IV. FUEL IDEAS TO REGULATE MONOPOLIES: There has been growing concern for regulating monopolies like Facebook, Google, Microsoft, and Amazon. Economists and lawyers are out there in formulating tougher antitrust regulations. But what is wrong with them? They are offering better products at a lower cost by investing in R&D, as opposed to manipulating public incentives, price-fixing, or colluding. Historically, the next wave of innovation has played a smarter role than regulation. For example, the monopoly power of Nokia was taken over by iPhone. Similarly, monopolies like Xerox or Kodak lost the market power due to the growing demand for printer, scanner, and electronic document sharing, and Digital imaging. Similarly, Netscape lost the monopoly to Internet Explorer. And Explorer lost its dominance to Chrome, Firefox, Safari, and many more. By taking over the video conferencing products of Microsoft and Cisco, Zoom has proven it again. That does not necessarily mean that regulation should be overlooked. Rather, fostering innovation and start-ups could be another tool for regulators and policymakers to weaken rent-seeking capability of monopoly without throttling innovation.

IV. FUND ACADEMIC R&D TO CREATE VIBRANT START-UP CULTURE: Despite being an American company, Zoom's product development team is largely based in China, where an average entry-level tech salary is one-third of American salaries, which is a key driver for a start-up to finance initial loss-making journey with limited risk capital for reaching profitability. China's ramping up of academic R&D may have underpinned this strategy. This is an encouraging note for the developing countries with the aspiration of devolving the innovation economy. Often it takes hundreds of millions of dollars for taking digital ideas to market at a profit. For example, Zoom had to raise funds several rounds to reach profitable revenue. During this initial loss-making period, often lasting for a decade, saving every penny counts. For cloud-based innovation, often, a large share of the risk capital goes for paying salary to R&D personnel. Due to high wage differential, hosting R&D team in developing countries could be a preferred option, provided HR quality is comparable. To leverage this opportunity, developing countries should invest in academic research to generate ideas for supporting next-generation innovation.

It appears that Covid triggered Zoom success has many lessons for us. For minimisation of cross-infection due to the virus, essential services starting from education to office meetings over Zoom is basically accelerating the long-term transformation of our society. Starting from rising monopoly to data security, there are new growing issues. On the other hand, this transformation demonstrates the power of ideas out of scientific research to restrain monopoly and foster innovation economy.

M. Rokonuzzaman, Ph.D is academic and researcher on technology, innovation and policy. Zaman.rokon.bd@gmail.com