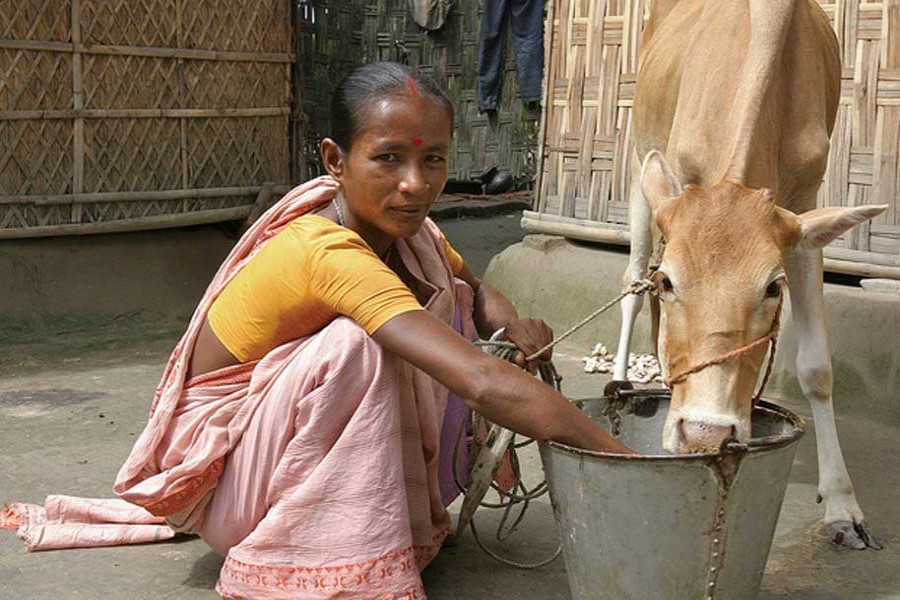 The first category of activities includes processing of food, cooking, child care, educating children, housekeeping, cottage industries. These activities are undertaken for producing goods and services - mainly for household consumption. Household-level activities are also called "expenditure saving" or conventional activities, largely carried out by rural women. Unfortunately, these are rarely documented or shown in national statistics. If one can impute value to them, the national income will increase substantially, and women's contribution to national income would become highly visible. Interestingly, men are also increasingly getting involved with household activities.

The second category relates to the economic activities against which some monetary payments (wage) are attached. The so-called "income generating" activities include crop and non-crop production, labouring in others' land, business, services, agro-processing and cottage industries. These activities are undertaken for producing market-oriented goods and services.

In this context, readers could be reminded of the theoretical foundations of supply of labour. The shape of the supply curve depends on two important impacts: income and substitution effects. With a rise in the wage level, a worker can earn more by putting in less hours of labour. The residual time may be used for rest or entertainment. Initially, however, labour hours increase with increase in income as labour substitutes leisure for work (called substitution effect) but, at a later stage, that could decrease with a rise in the wage rate (called income effect). That is why the supply curve of labour may not rise smoothly upwards, but could bend at some point to reduce the supply of labour hours. This is called backward bending supply curve of labour - the negative income effect from higher wages outweighing the positive substitution effect. Another reason could be there to reduce the supply of labour: a negative cross-substitution effect between, say, the rise in women's wages and husband's hours of work. As women work more, and when the time of husbands and that of wives in home work are substitutes, part of the decline in male labour force participation would reflect a reallocation of time for men's time from market to domestic works. Of course such a situation could arise in societies with high income levels.

In this write-up, we have defined a worker or labourer as a person who is engaged at least for an hour in activities that increases or saves income for a household. Under this definition are included both full-time and part-time labour whereas, we traditionally deal with only full-time workers. Under this new definition, the number of working members per household is reported to have declined from 2.65 to 2.59 in comparable periods. But while the number of male working members showed a downturn, female working members depicted a marginal rise. The reasons for the decline in the number of workers include, inter alia, a reduction in household size (effect of fertility reduction), migration of working members to cities and abroad, and increase in participation in secondary and tertiary levels of education.

It also appears that in the comparable periods of last two decades, say 1980s and 2000s, the duration of economic labour performed by an average worker has reduced substantially from four-fifths to three-fourths. Obviously this has happened due to a reduction in labour force participation by men with the share of women in the labour force remaining almost the same. Two factors could be adduced to this trend. First, men have growingly been attracted to domestic activities, and hence their relative contributions to economic activities have gone down. Second, the subsistence pressure of the households in the past forced young and old labour force to engage in economic activities and, for those in active age groups, to put in longer hours to earn a subsistence wage. Eminent economist late Abdullah Farouk (1980) called them "the hard working poor". In recent years the subsistence pressure has eased somewhat with improvement in poverty situation. Hence, with growing economic solvency, the poverty-induced longer work-hours have waned.  Besides, the older people take retirement if they can afford, and the young ones go to schools leaving child labour.

During the period under study, the duration of work effort has declined for both male and female labour forces - from 9 hours/day in the base year to 8.5 hours/day in recent periods. The change is remarkable in the case of women workers as they put in 8.35 hours now compared to 9.20 hours before. That means women used to work for more hours in the past (domestic and economic activities together) than men; now men work more than women. The apparent 'magical' change deserves an explanation. First, the reduction in the fertility rate has saved for women the time for involvement in childcare. Second, from some hard but cost-effective engagements, - such as boiling paddy, paddy husking through 'dhenki' and other manual works women have reduced the level of involvement as new technologies have entered into the market. Now mobile threshers are at the doorstep to substitute women's efforts for milling rice early in the morning with dhenki. Rice mills for parboiling of paddy and processing of rice are easily accessible. The house floors are paved, and hence women do not have to spend too much time for clearing the dusts.

It can be observed that economic activities have become more full-time pursuits for men where 7.7 to 7.8 hours/day has to be spent. The economic activities were mostly part-time work for women two decades ago. Even now they are part-time engagements, but the duration of labour has increased from 1.9 hours/day to 2.3 hours/day. It implies that, with the passage of time, women have got the opportunity to divert a part of their time from household to economic activities.  We presume that women are now giving more time to homestead-based activities, such as livestock and poultry rearing, vegetable gardening on homestead or pond aquaculture or social forestry.