Kushumba Mosque: The gem of Bengal 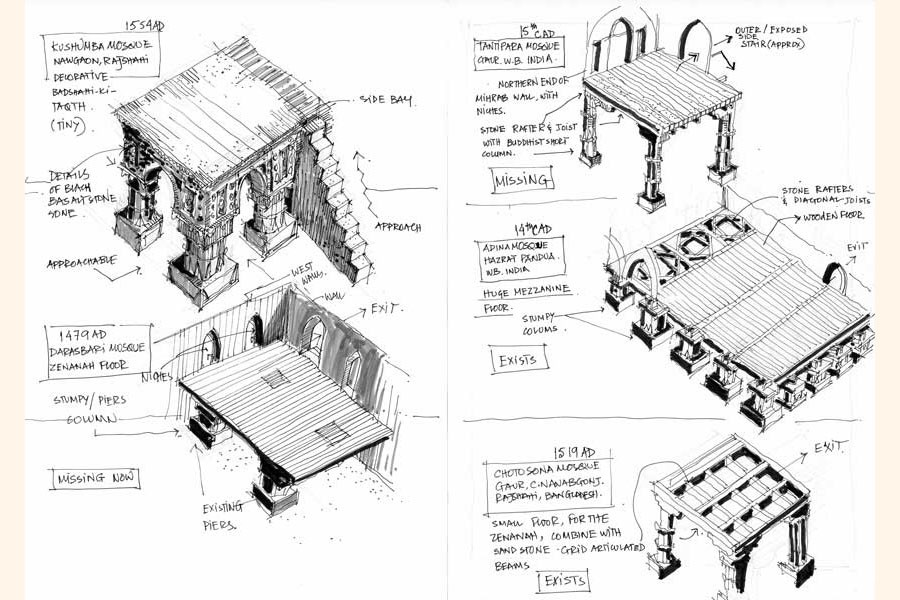 Mosques during the Islamic period were established with phenomenal stylistic approaches. Eventually the medieval mosque of Bengal shifted the meaning of religious spatial quality starting from socio-political situation to socio-cultural aspects. Mosques once became the cultural part of the neighbourhood; boys, girls and women used to take participation in the mosque activities. During the reign of the Sultans - mosques became the central hub of the society and main source of administration. So eventually, ages ago mosques used to perform as the public audience. Society used to network by a mosque which was congregational or sometime it was small waqt as well. The medieval mosque in this region whither it is single or multi-dome acted as the public audience, such as the Choto-sona mosque, Shait Gumbad mosque, Darasbari mosque and Kushumba mosque designed for the same purpose. Multipurpose activities became the part of the neighbourhood with state governance and other infrastructural development. Sultanate mosques of undivided hinterland pursue various new elements in mosque architecture with the happy blending with vernacular means which is time-immemorial and further turned into a style of terracotta mosque architecture of undivided Bengal.

Conceptually contained with rural influence of Bengal in a mosque is a brilliant interpretation to justify the interest properly. Most of the medieval mosques are elaborated with local motives and cultural ethos. Traditional curved cornice, turrets (four stumpy verticals on four corners) terracotta bricks, composite terracotta, chouchala vault etc. are the inherent ingredients of the medieval mosques.

Basically, medieval mosques appeared for the congregations and gathering. Since the development of sultanate ruling the activities of mosques focused on the social and cultural development. Two types of religious architecture could be identified to define people's orientation and activities. One is the - 'towards the God' approach and another one is 'for the people'. Hindu temples, Pagoda and cathedral are guided by the towards-the-God statement. Spatially and spiritually space has been guided and designed to step forward until the arcade ends. Linear or stripe-like space is connected in between one or two other linear elements. Existentially Deity is visible in this kind of religious space. On the other hand, 'for the people' determines public will approach to the space from Omni directions. This is like a pavilion and people gather in this place for resting, offering and praying. Very much abstract phenomenology serves in a pavilion.  Meanwhile, a mosque is fit in this category and only mosques could uphold the rejoice and glory of Islam in the spatial environment. So abstract and non-abstract matters relate in space making and putting the drama in it.

Drama in spiritual space is another ambiance; both in the Buddhist and Hindu temples spatially mystery was a common factor. In the cathedral light and height was the magic key to spiritual   ambience. Medieval mosque of Bengal did have the sense of abstract meaning. A room for the prayers where God is invisible and almighty remains everywhere…

However to guide a community; leaders used to arrive always. Medieval mosques were erected by the Sultans of the eras, they built the mosques to run the society with the light of Islam, moreover, to guide and to council a group of people, public spaces are needed. It is stimulating that seeing at the height of the medieval mosque; it has more than two storied height from a conventional building, different appearance evolves entering the hall room. Most of the sultanate mosques used to have a separate mezzanine or platform, which is accountable for the Sultan's seat or Badshahi- ka- Takth. This special floor acted as the throne for the Khalifa/leader or for the Sultan. The KUSHUMBA mosque is an ideal example to understand.

Kushumba Mosque is named after the village of Kushumba, under the Manda upazila of Naogaon district, on the west bank of the river Atrai. It is inside a walled enclosure with a monumental gateway that has standing spaces for guards. It was built during the period of Afghan rule in Bengal under one of the last Suri rulers Ghiyasuddin Bahadur Shah, by one Sulaiman who was probably a high ranking official. The inscription tablet in Arabic (only the word 'built by' is in Persian) dating the building to 966 AH (1558-59 AD) is fixed over its eastern central entrance. Although built during Suri rule, it is not influenced at all by the earlier Suri architecture of North India, and is well grounded in the Bengal style. The brick building, gently curved cornice, and the engaged octagonal corner towers are typical features.

Volume of space in a spiritual structure governs inaudibly. At the same time while the separate floor is there the spatial outlook comes across from the conventional space while flows from indoor to outdoor and obviously returns as the same, with this very notes when people get entered to the mosque by feeling the bigger space and later focus goes to the platform, where it used to be ruled by the Sultans.

The raised stone gallery or the platform is situated at the north-eastern corner of the hallroom. This is followed by a single flight stair from the front. The entire platform is ornate with floral chiseling on black basalt stone works. Stone rib beams used to execute in the back of the structural lines. Those are black sand stone. Heavily decorated Badshahi-ka-Takth was faced with a small decorative mehrabs. So, mosques used to become a DARBAR Hall or public audience while Sultans seat on the giant takth or platform. Apparently the platform looks like as a giant table inside the hall. Badshahi Ka Takth is an emblem of the medieval mosque; that qualifies uniqueness in mosque architecture.  In his connection we must make a note on the Adina Mosque of Pandua (1365), West Bengal India. It is a giant mosque in the subcontinent. The mosque contains a huge platform approachable through the ramp from the west-northern part.

Talking about the Mehrab of the Kushumba, precious stone curving with précised stone coiled and chiseling is splendid on the glazing black basalt stone. This mehrab art is meticulously unique from all in the Bengal's mosque architecture. Through this artistic development on stones; shifting of figurative artworks towards the abstraction and floral diagram with high intensity rich engraving on the stone are still evident on the west central part.

Lighting and ventilation is must in the loft space of the mosque, in all seasons, the indoor hall would get light through the natural means. Big jail works are engaged on the northern and southern walls for the cross ventilation. Stone jail skill is rear in this region; however, terracotta jail works are popular in this hinterland.

At the end we must escalate oneness about the elements in medieval mosques. The KUSHUMBA mosque is an exception from all. A mosque is embedded with 'king's throne' or Badsahi ka Takth as the point of socio-cultural activities.

Lastly the Kushumba mosque is a tiny mosque. Nevertheless an age back it was a place of justice, a domicile for the common people of this land and a true system to run a provincial government seating on the Badsahi- ka- Takth. As a cultural heritage of the country we must adorn and be aware about the place and practice. During the winter time local tourists visit the place with rejoice.