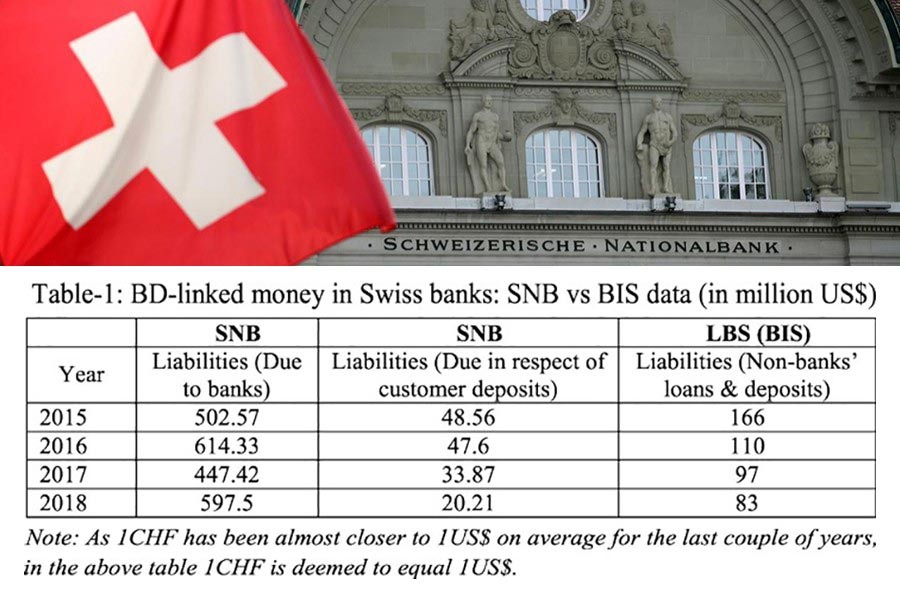 After placing the budget proposal in parliament on June 13, the extended legal scope to whiten black money drew sharp criticism from the different quarters. They pointed out that such provisions were not only unethical, but also against economic logic. Some quarters including top business and trade bodies, however, backed the move. They also supported the government's argument that this would bring black money into the mainstream economy.

The banks in Switzerland are generally known for their secrecy and the country is also labelled by many as a tax heaven. Citizens of many developed and developing countries have been parking their funds and valuable assets in Swiss banks for long. It is because most of them want to keep their illegally earned income in safe custody. In this way, big capital flights from these countries are also taking place. So, it is generally believed that most of the money deposited in these banks is black.

In reality, however, not all the money kept in the Swiss banks is black and the same is true to Bangladesh-linked funds. A number of Bangladeshi nationals working in Switzerland and other countries in Europe have their money in these banks. Bangladesh-based business houses have also accounts there.

But for the last few years, the Swiss banks are under global pressure to share information of the depositors. The Swiss authorities have agreed to provide information under certain conditions as part of fight against the inflow of illicit money from many countries.

Nevertheless, money in Swiss banks parked by different nationals including Bangladeshis is a reality. The figure of deposited Bangladeshi money quoted in different news media has been sourced from a flagship publication of Swiss National Bank (SNB). Titled 'Banks is Switzerland 2018', it presents detailed statistics of operational activities and transactions of banks located in Swiss territory.  The report is supplemented by a big set of data which is available online. A sub-section titled 'Comprehensive year-end statistics: parent company, country breakdown' provides information on transactions of foreign nationals.  It is presented in a balance sheet format.  The assets side indicates the amount of loans and advances provided to the foreign nationals by the Swiss banks. The liabilities side indicates the amount of deposits by the foreign nationals in these banks.

Media reports quote the figures available under the liabilities side and present those as the amount stashed from a country to Swiss banks in a particular year.  The SNB report, however, never mentions anything about the nature of the money in Swiss banks.  There is no scope to do so, indeed. Media itself perceived these deposits as black or stashed money as the Swiss banks are well known for parking such money.

Two years back, Bangladesh Bank prepared an explanatory note regarding Bangladesh-linked funds in Swiss banks. It said that individual clients accounted less than 10 per cent of such deposits while the maximum amount was deposited by banks resulting from various trade transactions. As banks and financial institutions can not deposit any shady or undisclosed fund, the actual amount of black or stashed money should be much lower compared to the amount publicised in the media. It also said that both the assets and liabilities in the Swiss banks were generated mainly due to foreign trade transactions.

Earlier, BB said it would take up the matter with the Swiss central bank. A few years back, BB told the media that it had written to SNB, but SNB didn't respond. Thus, Bangladesh Bank has to prepare its own explanation regarding the Swiss banks' data. There is, however, more scope to work on the matter as India has been doing.

Following media reports over the years, Indian government took some measures to interpret the Swiss banks' data. As part of the measures, it got in touch with the Swiss Embassy in New Delhi. Responding to the request, the embassy in a letter to the Indian government said: "The figures published by the SNB are regularly mentioned in the Indian media as a reliable indicator of the amount of assets held with Swiss financial institutions in respect of Indian residents. More often than not, the media reports have not taken account of the way the figures have to be interpreted, which has resulted in misleading headlines and analyses. Moreover, it is frequently assumed that any assets held by Indian residents in Switzerland are undeclared (so-called 'Black Money')." It also said: "To analyse Indian residents' deposits held in Switzerland, another data source should be used. This is the so-called 'locational banking statistics', which the SNB collects in collaboration with the Bank for International Settlements (BIS)."

Quoting data from Locational Banking Statistics (LBS), Piyush Goyal, the then acting finance minister of India, told the Rajya Sabha that Indian money in the Swiss banks actually declined by 80 per cent in five years (2013-2017). LBS data showed that money deposited by Indians in the Swiss banks was $2648 billion in 2013 which gradually came down to $524 billion in 2017.  But according to SNB data, Indian money in Swiss banks stood at $1014.60 million in 2017. In 2018, it came down to $955 million while LBS data put it at $370 million.

Taking cue from India-related data, this writer tried to explore the LBS of BIS and found that Bangladeshi money (non-bank or individual) in Swiss banks had been declining gradually. The amount was $166 billion (Tk 142.76 billion) in 2015 which came down to $83 billion at the end of 2018 (table-1).

But there is a limitation of using the LBS data in such a way. It is an outstanding or stock figure. Annual figure is derived by adding the stock figures of each quarter, which may be misleading.

Nevertheless, exploring the LBS data in detail will be a good exercise to interpret the figures about Bangladesh-linked money in the Swiss banks. Bangladesh Bank may think about it seriously as it has greater access to BIS data.  A different picture may also emerge from the exercise, if done professionally.