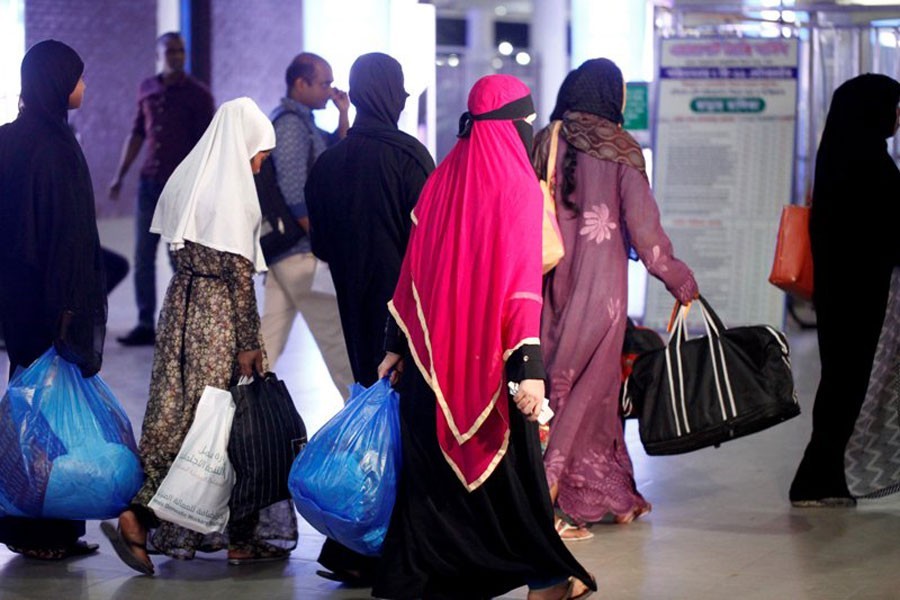 A survey by the BRAC Migration Programme has recently found that the incidence of questionable deaths of female migrant workers has been rising in the recent years. Between 2016 and June 2019, death-bodies of 311 women migrants were sent from the Middle East - mostly from Saudi Arabia. Out of them, 53 died by suicide, 120 due to stroke and 56 in accidents as reported.

Over the years, the number of deaths of migrant female workers by suicide have seen an alarming rise from 1(one) in 2016 to 17 so far this year. One in every three deaths this year is a suicide. Humanitarian organisations are worried over the high number of suicides and deaths in strokes and have demanded for further investigations into the cases. It is alleged that many employers in the Arab countries, especially in Saudi Arabia, consider female domestic workers as anything better than slaves. So they behave however they please.

Human rights organisations have helped rescue a number of female domestic workers from troubled situations in the Middle East during the last several years and reported that the workers had faced inhuman exploitation there. They were not allowed to go outside and must do whatever their employers demanded of them.

Hundreds of female migrants returned home every month during the last two years, having suffered various forms of abuses. Some were allegedly abused physically and also sexually; some became pregnant and mentally imbalanced too.

Eventually a rising number of female migrant workers are returning in coffins, many of whom allegedly died by suicide. It is a mystery why the poor women going abroad to work would commit suicide.

The other two major factors are stroke and accident. Women going to the Middle East are mostly aged between 20 and 40. Why would they suffer stroke? Also, female migrants work indoors; why so many of them die in accidents?

The Bangladesh government should investigate into the cases seriously and identify the reasons behind such unnatural deaths and take remedial actions accordingly.

We need to be careful about capacity development of the female migrants before they are sent abroad. If we fail to take prompt action to control this worsening situation affecting the migrant female workers, it may affect our socioeconomic conditions. We should keep in mind that the remittance inflow from migrant workers contributes greatly to the economy of the country.

BM Sajjad Hossain, a development researcher, is an Associate Professor at the Department of Business Administration, the University of Comilla. bmsajjad@gmail.com