In Mysore past and present meet together, happily 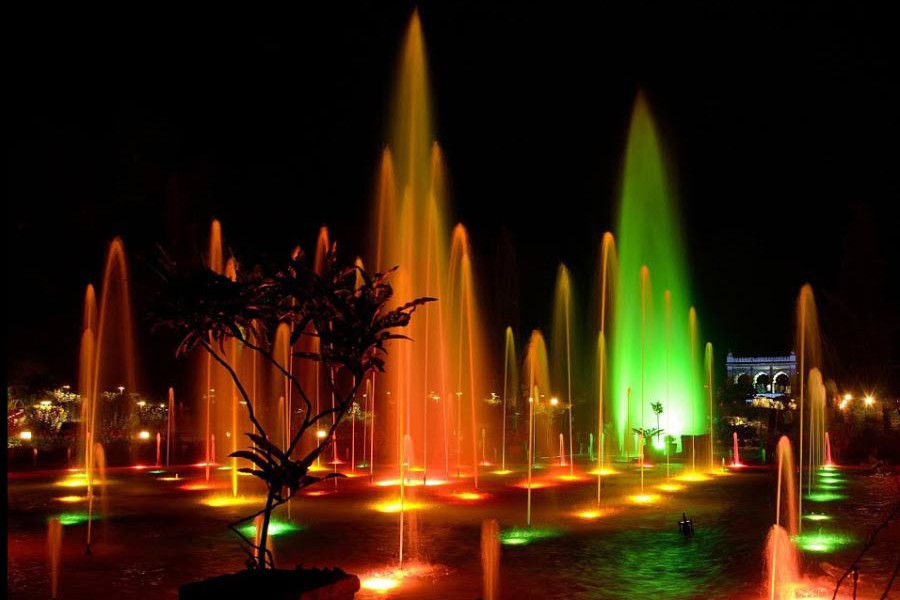 With the roseate light of the setting sun at Mysore dusk getting serrated through the trees, the graveyard of Tiupu, inventor of cannon, looked so forlorn and uncared for that the site cannot but make one pensive. A hero who loved the land and independence so much could deserve better at least in the independent India. The sad feeling assailed my mind so deeply that I could not pay attention to the details of the next attraction, a temple. Devotees were offering puja but as it is my wont I looked for the stone sculpture and statues on walls. They were equally embellished like those in other temples in South India. Again, the latest addition of statues often used for processions on special occasions reveal the difference between the master craft of the past and the naïve imitation of the present. What was particularly noticeable is the stack of mint leaves from which devotees picked a few and started chewing those. Mint has medicinal quality but that it can be chewed raw is a new experience.

Rich in history, Mysore has deftly mixed its past glories with present technological attainment. Inspired by the Lalbagh Botanical Garden in Bangalore, which was founded by Haider Ali, Tipu Sultan's father, Sir Mirza Ismail, Dewan of Mysore set himself the task of creating a wonder garden known as the Brindavan Gardens. The 60-acre garden lies beside the Krisnarajasagara Dam built across the Cauvery River. An engineering marvel, the dam was built to irrigate 120,000 acres of land. While the dam serves the most practical purpose of agriculture, the garden laid out in three terraces for cascading water to flow with in-built lighting system changing its colours continually serves as a mental oasis for visitors. At night time, it is simply mesmerizing. The musical fountain's bursts of water are synchronized to music and songs. When the light goes off at 8 pm, it does not cease to cast its enchanting spell on those who care to listen to the harmony blended together with water, foliage and human life. Here is an attempt to bring people closer to Nature.

The day's sightseeing ended at the Brindavan Gardens. But we still had miles to go before we found a place for the night's stay. Our next destination is Bandipur Safari Park. With no advance booking for a hotel or a lodge near the safari park -there is no facility for staying overnight within its boundary -the responsibility was handed over to our most efficient driver and we knew we could rest assured on his discretion. We did not even have to spell out our choice for a budget hotel or a pricier one. But first of all, the gastronomic compulsion had to be responded to. This time, though, my son and daughter made their intention known in no uncertain terms that they would like to experience a dhaba dinner. We had no disagreement to this. So, our prying eyes kept on searching for one of the many on the roadside.

At some point, the thatched canopies with lighting gates and the surrounding attracted our attention. We made our choice for the eatery. The CEO-cum-manager of the dhaba has a story to tell. He served as a bearer in a few three-star and five-star hotels in Bangalore and has learnt the art of cuisine --mainly South Indian but also continental as well. After a few years he came back to his village just beside the Mysore-Bandipur Highway and established the dhaba. He has also expanded his business to motel-keeping. His sprawling area will possibly flourish to make arrangement for far better accommodation.

Why? The answer is simple. There were more foods than we ordered. We could not recommend foods but the service was good. But when the bill arrived, we were shocked by the exaggerated amount. After our dinner, the nightly journey on the highway was enjoyable. By the time we inquired at a hotel where there was no room. Once again, the driver took us to another hotel and as we decided to settle there, storms accompanied with rain swept through. Luckily, we were protected in the four walls. But right at that moment light went off and to our misery, we were told that the hotel had no generator. Our brave and ingenious driver urged to get into the car for what looked like an expedition through the driving rain. Actually, we drove backward about 10 kilometres to have a decent hotel to spend the night. Next day we are off to the safari park.