How to rein in price of onion 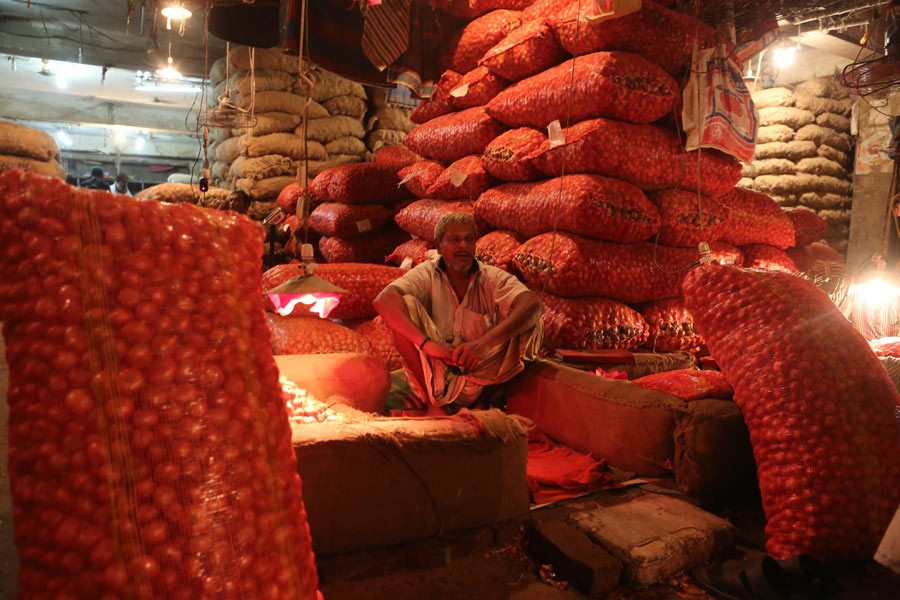 Onion price in retail markets went up to around 70 per cent within a few days, as the wholesalers reportedly jacked up the price following India's ban on the ingredient export.

Onion price at Dhaka's kitchen markets rose to Tk 110-120 a kilogramme late this week, which was Tk 40-50 a kf just days before.

Amid the skyrocketing price-hike, the government says the country has a stock of 3.9 million tonnes of onion and it will cover the requirements for 50-55 more days.

The authorities warned that if anyone stores onion and creates market volatility deliberately, this will be dealt with an iron hand. It said there is no reason for onion price-hike given the adequate stock. Two ships arrived in the country from Myanmar and more shipments are in pipeline. Besides, the government is sending 10 high officials to onion growing districts to monitor the supply chain of locally grown onions.

Onion prices surged overnight after traders hiked rates in the wake of restriction imposed by India on onion shipments to other countries to contain its domestic prices. India slapped $850 (Tk 71,821) as minimum export price per tonne, a move that made onion market highly volatile here. Bangladesh meets a portion of its annual onion demand through imports.

Local onion prices shot up from Tk 300 each maund to Tk 2,600 this week from Tk 2,300 late last week. Most of the farmers do not have onions in their stock. Domestic production can meet demand for 7-8 months and 0.7-0.8 million tonnes of onions need to be imported.

Although the commerce minister claimed that the price of onion would come down soon, it continues to rise. Some traders, according to reports, have already imported onion which is now available in the markets. But the prices are not coming down. Traders have attributed the price surge to import price and dilapidated roads. Heavy downpour has also caused a supply shortage. The fact remains that a section of unscrupulous traders simply wait for such an opportunity to make a windfall profit. Now the local consumers are going to be stripped of cash for high price of onion.

Recently, the Trading Corporation of Bangladesh (TCB) recommended imports of onion in bulk quantity as the prices have been escalating in the local markets. In a recent meeting at the Ministry of Commerce the businessmen proposed reduction in duty on import of some essentials including onion to rein in the prices.

Although production of onion in Bangladesh has increased in recent years, its import continues, draining out a significant quantity of foreign exchange. The Bangladesh Agriculture Development Corporation (BADC) in collaboration with the Department of Agriculture Extension (DAE) needs to take a project to make the country self-sufficient in onion production.

For example, the corporation can import seeds of onion from Europe. Onions there weigh up 300 grams each although their peel and colour are similar to local varieties. The department can provide technical knowhow to farmers to grow such onions. If they do so, Bangladesh can become self-sufficient in onion production within a couple of years.

The TCB's move to supply two-kg packet of onion for each consumer through vans in the city and elsewhere is highly inadequate. The government must expedite its import to ensure that unscrupulous traders don't push prices up on any excuse.

It is the commerce ministry's responsibility to monitor the prices of the kitchen market. If it leaves everything in the hands of the businesspeople in the name of free market, then what the agencies will do to protect the consumers' interest!