How prudent is the rice export move? 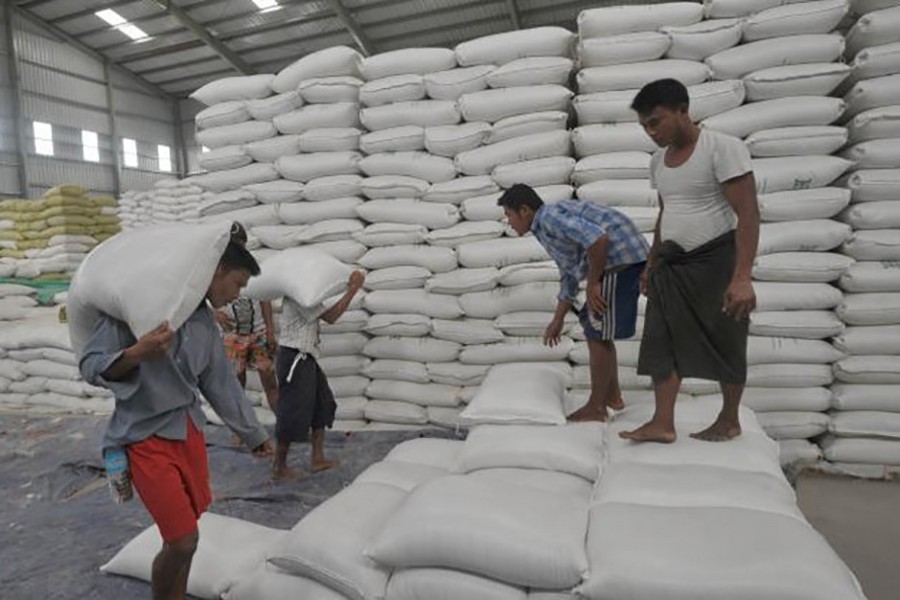 The government seems to be clueless about the course of action dealing with the 'bumper' production of Boro rice this year.

It has reportedly decided to allow export of milled rice and the quantity may vary between 1.0 million and 1.5 million tonnes. To incentivise rice export, the option of providing 20 per cent cash subsidy has also been kept open.

The decision to export rice and pay probable cash subsidy follows the recent increase in duty and taxes on rice import from 28 per cent to 55 per cent.

The decision to allow rice export has triggered a debate about its appropriateness among experts. The International Food Policy Research Institute (IFPRI), the Washington-based research organisation, is, for example, critical of the idea.

Allegations have it that the developments that have been taking place over this year's Boro harvest are basically aimed at benefitting the rice millers and traders.

The fact that the farmers are now failing to recover even half of their cost of production through the sale of Boro paddy this season is not even contested by the relevant authorities. The situation is really dismal as far as paddy prices are concerned at the growers' level. Whether such a situation has been created deliberately by a nexus of evil forces remains a matter of investigation. The truth, however, is unlikely to be revealed.

The decision to allow rice export along with payment of cash subsidy deserves a review. Firstly, does the government have authentic data about rice production? That the farmers are not getting fair prices for their produce does not necessarily prove that it is because of bumper production. It could be a ploy of the millers. They might have asked their agents, who are locally known as 'fariahs', not to buy paddy from the farmers above certain price tags.

It is suspected that the millers might have crafted a plan to buy rice at throwaway prices, sell a part of the same to the government under the latter's so-called procurement drive and put pressure on the relevant authorities to allow export of rice with subsidy facility. They want to gain from local sales and export.

Sounds absurd?  It should not be.

For, there exists a section of unscrupulous traders who could go to any length to satisfy their greed for high profits. Then again, a few dishonest officials are found always on their toes to extend their helping hands to such traders.

Weeks before the start of the ongoing Boro harvest, some big rice traders demanded of the government to allow export of rice along with provisions for subsidy. Amidst growing concern over falling paddy prices, the government has apparently accepted their demand.

The incumbent agriculture minister, as published in a section of newspapers, has given an explanation supporting the rice export move. He said the rice millers had put forward a demand for allowing rice export.

"We have accepted the demand. In the event of any hike in the prices, if necessary, we will import rice", he was quoted as saying.

However, a reversal in rice prices in the domestic market at an 'appropriate' time cannot be ruled out taking advantage of, at least, two factors - nearly 100 per cent hike in duty on imported rice and its export.  The farmers would be least benefitted by such a hike for they would dispose of their stock by that time. It is none but the general consumers who would suffer then.

Things are apparently planned that way. And the government contributes to such a scheme either unknowingly or prefers to remain as an onlooker.

As reported in the media, the external rice market is now very much depressed because of good harvest in most rice-exporting countries, including India, Thailand and Vietnam. Exporting rice in such a situation might prove a difficult task for a country like Bangladesh that intends to market parboiled rice.

Besides, if granted, there is every possibility that the export subsidy facility would be abused by the dishonest section of traders. The abuse of the facility is rampant in the case of export of many other items.

Secondly, food production trend in the case of Bangladesh is not that reliable. Being vulnerable to extreme weather conditions such as cyclones and floods, production of cereals fluctuates very often. Take the case of the fiscal year 2017-18, two successive early floods caused extensive damage to Boro crops in haor areas. Nearly 4.0 million tonnes of rice were imported to rein in the record hike in rice prices locally.

Moreover, after building up of the buffer stock by the government, not enough rice is actually available for export even under the best rice production scenario. In such a situation, any move to export rice does not seem appropriate. The government should, instead, try to address the loopholes in its rice procurement drives launched during Aman and Boro seasons. That would be really helpful for the farmers.

One major problem observed in the government's food procurement drive is that it starts buying paddy and rice weeks after the announced schedule. And the other is that the government is more interested in procuring milled rice from the millers and not from the rice growers at fair price.

The government should bring about necessary changes in its relevant programmes and start procuring paddy directly from the farmers and engage the private rice mills only to process the same. Besides, it should reduce the involvement of middlemen as far as possible in the whole procurement programme.