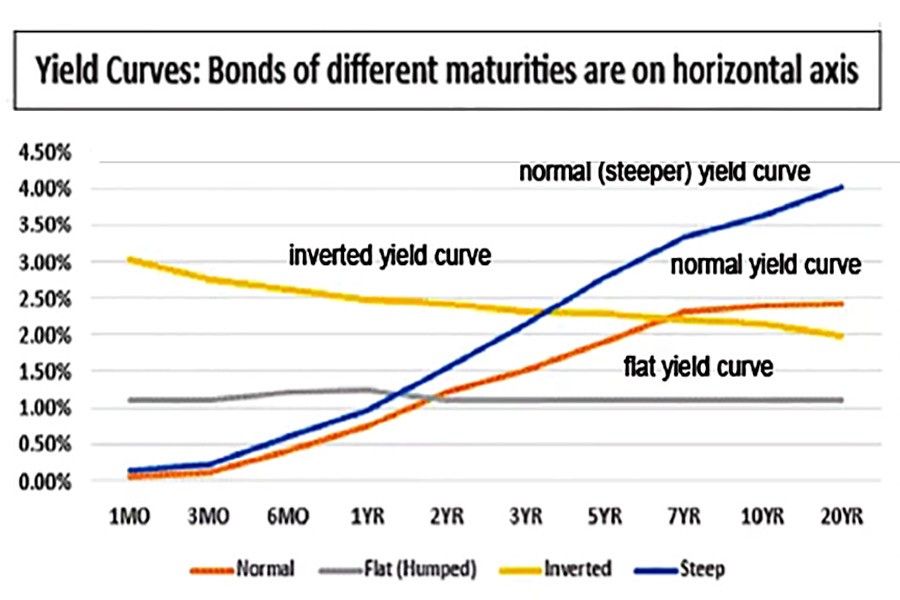 As alluded in my August 21 article "Asymmetric effects of monetary policy", this explains the essential paraphernalia as they relate to business cycle and monetary policy.

Financial market experts and macroeconomists in general have uncovered the links between GDP growth and the term structure of interest rates (a.k.a. yield curve) as a snooping case of American economy's unique trait. Normally, in all economies interest rates rise as borrowing periods lengthen as default risks and inflation expectations grow over time. Occasionally though, in economies with active bond market exception to this normal pattern reverses, interest rates on short-term bonds surpass the rates on long-term bonds - a phenomenon known as yield curve inversion.

Most of the bond market activities in Bangladesh are limited to Bangladesh Bank's (BB) Repo and Reverse Repo operations to coordinate and achieve government's fiscal objectives of GDP growth and price stability. Unlike advanced economies, bond market activities in Bangladesh by non-bank financial institutions such as private and public employees' pension funds, life insurance companies, mutual funds and so on are not widespread on an hourly and daily basis. It is therefore not unreasonable to assume that people working in BB, commercial banks, and non-bank financial institutions may have a stake in understanding as to how to exploit vital information contaminated in yield curves.  Besides, for BB understanding the relationships among interest rates, inflation expectations, and GDP growth will be immensely helpful in its conduct of interest based monetary policy by being able to read and interpret yield curves.

It is incongruous to think as though all interest rates behave in the same way. In practice, the behaviour of interest rates on various bonds depend on their maturity. That is what the yield curve is about -- a chart depicting the interest rate paid on bonds of different maturity dates but with equal risk exposure (credit quality). The curve reflects the short, intermediate, and long-term rates of Treasury Bonds (in short Treasuries). In the U.S. the yield curve is often referred to as a proxy for investor sentiment on the direction of the economy. They are commonly found in three shapes: upward sloping, flat (or humped), and inverted (or downward sloping) -- each reflecting useful information about future interest rate changes and economic activity.

NORMAL YIELD CURVE (NYC):  In general, short-term bonds carry lower yields to reflect the fact that an investor's money is subject to less risk exposure. Why so? Longer investment horizon promises higher returns to compensate for future inflation and default risks. This characteristic is reflected in NYC, which slopes upward on the chart as maturities lengthen, yields rise.  As the economy is on expansion-inertia, investors expect the yield on longer maturity bonds to continue rising higher and rising. Consequently, many investors would temporarily hold their funds in shorter-term securities (for easy conversion to liquidity), hoping to purchase longer-term bonds later for higher yields. Holding funds in shorter term bonds pushes their price higher (as bond price and interest on bonds are negatively related), which in turn pushes their yields lower. This results in a steeper upward sloping normal yield curve.

INVERTED YIELD CURVE (IYC): An IYC  shows shorter-term yields (3 months to 2 years) are higher than the longer-term yields, which can be a sign of upcoming recession. Why so? First, an IYC appears counterintuitive since it violates the axiom "higher reward for higher risk" which long term maturity bonds promise. As one might expect, lower interest rates generally mean the economy is slowing with anemic growth. Therefore, an IYC curve is interpreted as flashing a yellow sign (not red yet) that the economy may soon stagnate. While IYCs are not common occurrence does not mean they should be ignored - not at all. They are very often followed by economic slowdown-or an outright recession-as well as lower interest rates along all points of the yield curve.

FLAT YIELD CURVE (FYC): A FYC may arise from NYC or IYC, depending on the state the economy. This is observed when the economy is making a transition from an expansionary phase to slower growth and even recession as yields on longer-maturity bonds tend to fall and yields on shorter-term bonds tend to rise, inverting a NYC to one of FYC. This spectacle is reversed when the economy is transitioning from recession to recovery and potential expansion resulting in a FYC.

In recent years in the U.S., the difference between the yields on short- term (say 2 years) and long-term (usually, 10 years) maturity Treasury Bonds have shown some notoriety as a simple predictor of economic growth. The rule of thumb is that an IYC flashes the brewing of a recession in about a year. For example, IYC has preceded each of the last seven recessions, including the 2008 Great Recession. The bond market experts use past values of the yield spread and GDP growth to project real GDP - while not predicting actual growth figure accurately - especially in the case of recessions.

What is concerning now is that another recession may be in the offing given that the spread between the yield on the 10-year Treasury and that of the 2-year Treasury turned negative for three times in less than two weeks since August 14. This has elevated the concerns of an impending recession of bond market experts and of Arturo Estrella, the economist who first discovered the predictive power of the yield curve. What has made Estrella worried is that the "part of the curve he really follows - the 3-month/10-year - has remained inverted for months with the spread widening". Currently, the 3-month Treasury bill rate is 1.987 per cent while the 10-year rate at 1.606 per cent.  He forcefully argues, "It's impossible to be 100 per cent sure about the future but I'd say the chances of a recession in the second half next year are pretty high."

Several conditions are necessary for the yield curve to function reliably as a forecasting tool. First the shape of the yield curve must be strongly influenced by expectations about future interest rates. Second, people's expectations about future direction of interest rates must be generally correct. Third, to infer growth and recession from yield curves, economic activity as well as interest rates must be strongly correlated - that is, they must move in a systematic fashion over the business cycle.

The above conditions affirm that yield curve predictions are speculative and probabilistic in nature and hence are subject to errors as are any statistical measures. Therefore, for fine tuning the policy parameters, monetary policy makers use the estimates from sophisticated econometric models. The differences in predictions could be attributed in part to changes in international capital flows and inflation expectations, among other factors.  Since yield curves encompass vital information as business cycle indicators, like other indicators, they should be interpreted and exploited with judiciousness.

The narratives as presented may appear somewhat academic for BB officials and others at this time but what is not academic is that if the world's most advanced and richest economy sneezes, the rest of the global economy gets the flu.  Therefore, Bangladesh policy makers should preempt with contingencies to ameliorate the situation if a global recession were to occur.  For the BB authority, I would insist for investing heavily in preparing its young economists to be ready to understand and interpret the complex financial market tools to effectively conduct interest rate based monetary policy for a future advanced Bangladesh economy.

Abdullah A Dewan, formerly a physicist and a nuclear engineer at BAEC, is professor of Economics at Eastern Michigan University.