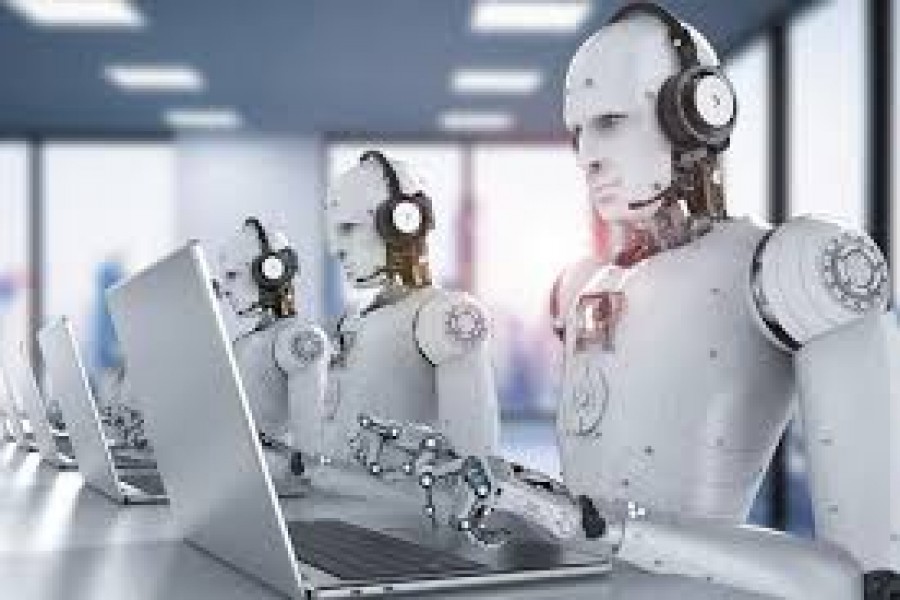 At the dawn of the 21st century, we are caught in the dichotomy between the disastrous and benign effects of artificially intelligent machines-robots.  One group has been raising the alarm of the destructive effects of robotics on jobs. It is being argued that the ongoing advances in AI (artificial intelligence) and robotics will spell the end of work by humans. On the other hand, many economists claim that the technological revolution in the past has eventually increased the demand for labour and wages, so, there is no reason to be too worried.

Only the future can unfold the truth. However, it's certain that technology advancement will have both displacement and reinstatement effects on jobs, transforming the labour market. And such an effect will likely have a polarising effect across types of jobs, firms, and countries. Already, Brookings' analysis indicates that technology has hollowed out the middle layer jobs in the US labour market; and this is not new. For example, the 2nd industrial revolution killed jobs of artisans and created low skilled labour-intensive jobs in mass production line for low skilled workers.

Over the decades, producers have been taking advantage of technology by designing machines to perform tasks, which used to be executed by humans. Job division and technology progression has opened the opportunity of engaging only the innate capability of labour in performing low-end manufacturing tasks. Over the last several decades, those low-end tasks have been brought in developing countries, creating industrial jobs for the low skilled labour force. For example, Bangladesh has obtained 4 million jobs in its readymade garment industry. Similarly, Indonesia and Vietnam have been blessed with millions of jobs in shoemaking and electronics assembly, among others. At the dawn of the fourth industrial revolution, it's being predicted that this labour centric value addition capacity of developing countries to the global value chain of manufacturing is at high risk. Notably, the establishment of shoemaking robot factories by Adidas in Germany and Atlanta rang the alarm bell-was it the beginning of relocating labour-intensive manufacturing operations from developing countries to closer to markets of advanced countries?

The recent decision of Adidas of closing down those robot factories and relying on labour-intensive operations of East Asia to serve their global value chain has raised new questions. Does it mean that robots cannot take over low-end labour-intensive tasks from workers in developing countries? Is it just a matter of time to advance robots further to make them a better option than low skilled labour of East Asia? What is the lesson for low-skilled labour suppliers to the global manufacturing value chain?

To meet the growing wage of labour, and for offering better quality output at a lower cost, profit-maximising firms have been improving the role of capital or machinery. Technology is being developed to build machines -- better machines to delegate increasing role from labour.  As a result, the comparative advantage between capital and labour has been continuously shifting towards the machine. Although low skilled workers in East Asian countries have been performing low-end tasks--primarily by using their innate abilities, they are highly complex for robots to perform. Despite the progress in building robots with human-like physical capabilities, it's a long way to go, though not impossible, to build human-like innate capabilities like vision and subtle communication in autonomous machines.

According to O*Net occupation and skill database of U.S. Department of Labour, Employment & Training Administration, human beings have vital 52 innate capabilities in the categories of cognitive, physical, psychomotor, and sensor abilities. Despite the success of sensors, high-speed communication including 5G, and supper computing capabilities of smartphones or the emergence of quantum computing, our abilities to build certain innate capabilities, which are very relevant in performing tasks, in machines are either at a very early stage of development or do not exist as yet. For example, a peripheral vision which is about the ability to see objects or movement of objects to one's side when the eyes are looking ahead is an innate ability of humans and integral to performing diverse tasks -- from driving to manufacturing.

Similarly, human capability of glare sensitivity to see objects in the presence of glare or bright lighting is extremely difficult to develop in machines. It's worth noting that glare likely caused confusion in the vision system of Tesla's autonomous driving, causing accident and death of the driver, in May 2016. Against a bright spring sky, the car's sensors system failed to distinguish a large white 18-wheel truck and trailer crossing the highway, which led the car to get crashed as it attempted to drive full speed under the trailer.

There is no denying that the progress in sensors, communication, processors, and software will keep increasing our capability in building human's innate capabilities in machines. However, success of replacing certain innate human capabilities will take time. On the other hand, we can keep sharpening those capabilities of workers, which will lead to a longer shelf life of comparative advantage of human workers. For example, through training, we can enhance the ability of the humans to match or detect differences between colours, including shades of colour and brightness in varying conditions. Similarly, dynamic flexibility to quickly and repeatedly bend, stretch, twist, or reach out with our body, arms, or legs could be accentuated further through training.

There is no doubt that machines will keep gaining a comparative advantage, which will keep the process of increasing task delegation from human to machine unabated. The success of taking over codified capability, which has been killing middle layer jobs, will likely keep progressing in taking over low-level tasks, which require humans' innate abilities. Both the market force and our urgency of producing more with less will keep improving this machine's capability, causing transformation in the labour market. For sure, the penetration of robots in factories will keep reducing labour demand. But as a countervailing measure, particularly to get a bit longer time to create reinstatement effect, developing countries should focus on sharpening the innate capabilities of humans. Improving innate abilities will lead to also higher efficiency and productivity without increasing capital investment. Most importantly, it will slow down the robot invasion giving more time to developing countries to prepare for leveraging the creative opportunities of the fourth industrial revolution.

M Rokonuzzaman PhD is an academic and researcher on technology,