Home for the homeless 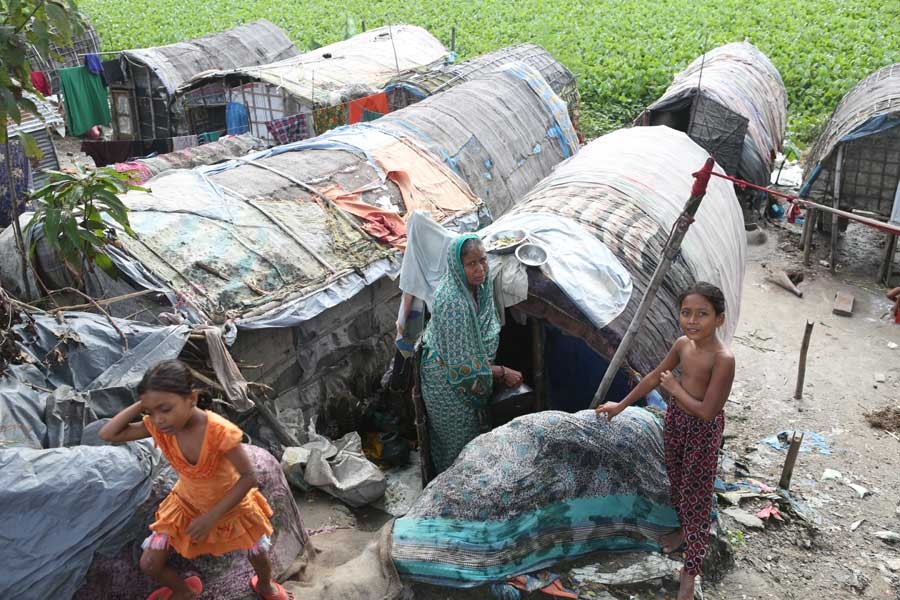 By all means it is an ambitious project but the country's prime minister took personal interest to make it happen. On Friday, she inaugurated the Khurushkul Ashrayan Prokalpa in Cox's Bazaar through a video conference. Six hundred families rendered climate refugees by the 1991 cyclone move to the already completed 20 of the 139 five-storey buildings to be constructed for rehabilitation of 4,409 families.

When the south-eastern coastal belt was again battered by another cyclone in 1997, the premier visited the area and observed the miseries of people living in crammed shacks. It was then she expressed her intention of constructing decent homes for their living. Thus takes shape the housing project at Khurushkul. Each flat of 456.07 square feet with all modern amenities is going to be allocated among the climate refugees.

Sure enough, this is a highly appreciable initiative to rehabilitate homeless and landless people. What is particularly remarkable about the buildings is their accommodation capacity as flood and cyclone shelters. The ground floor has been left vacant. With the assignment of construction of the buildings given to the army, it can be expected that there was no compromise on materials that went into constructing the 20 building completed in the first phase and the same stringent guidelines will be followed for construction of the rest.

To her credit, the PM has envisioned not only in terms of the beneficiaries' shelter but also their livelihoods. It will be a separate town where a special economic zone of dried fish (shutki) will be developed alongside a tourist site complemented by a green belt. This is encouraging. Unless the poor people have means of income to fall back upon, living in the building for them will be impossible at a certain point. Then again, the prime minister is well aware that their children will have to be educated in order to improve their conditions and live a better life compared to their parents.

Some like to dub the project the world's largest for the climate refugees. Indeed, these may be the case once the entire project is completed. During the inauguration of the project, the prime minister has also expressed her willingness to provide every landless and homeless family in the country with a shelter. This sounds even more ambitious but given the political will, it is not impossible.

The problem, however, is the misuse of facilities and misappropriation of funds at different stages of fund allocation. An investigation team called 'Talash' of the Independent TV channel recently telecast a programme on a similar housing project for the poor in Sarishabari of Jamalpur. It exposes how well-to-do families, some of whom are relatives of the local elected representatives, have been allocated the houses at the expense of the deserving. In a number of cases, abuse of power by local representatives was reported there.

The prime minister's effort, intention and vision were reportedly sought to be distorted by dishonest, vested and greedy people. In Sarishabari, many of the extreme poor had not been poor and shelterless before river erosion rendered them homeless. Now they live in miseries and shacks. But these deserving people were not allocated the houses under the government project. In one case, the team of the TV channel reported, a man living in Dhaka has been allocated a house which remains under lock and key for most of the year except when he returns home on holidays.

In a country where river erosion, floods and cyclone render people homeless and landless, successful implementation of such projects depend on the honesty and integrity of local level people's representatives and administration. Abuse of power and misappropriation of project funds must be meted out with due punishment.

In Cox's Bazaar the PM's vision and sincere effort to provide shelter for the poor and climate refugees have triumphed and the nobility of her sprit stands exemplified. This should be followed everywhere.