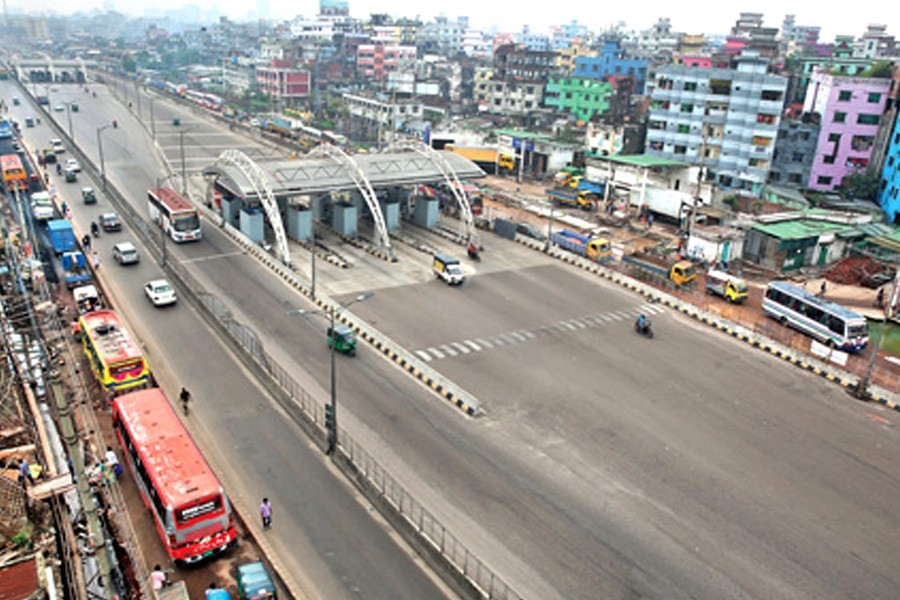 Prime Minister Sheikh Hasina has instructed the authorities concerned to introduce a system of highway toll collection. Under the system long haul vehicles will have to pay taxes for use of a national highway. Vehicles owners, drivers, passengers and the general public, for understandable reasons, are unlikely to welcome the proposed move. Already, different bodies have made known their criticism of the proposed toll collection system. Transport owners' associations oppose the idea on the ground that highways are not smooth and congestion- or accident-free and when toll plazas or booths will start collecting tolls, the process will delay vehicles, lengthening travel time. Also, the toll collectors will frustrate the purpose of using the money for maintenance of highways by resorting to malpractices.

All these arguments cannot be dismissed outright, given the past experiences. Even if the account is maintained properly, the salary of toll booth operators comes to a sizeable proportion -up to one-third in some cases as experienced in different countries --of the total toll collected. In this country, the ingenuity of people in skirting around a system is legendary. Then, if there is any possibility of serving mutual interests, parties are willing to go extra miles to outdo a system. Moreover, to make up for the time loss on account of slowing, stopping and paying tolls, drivers may accelerate speed immediately afterwards -an invitation for accident. The body working for welfare of passengers views it from an economic perspective. It is right to argue that the toll imposed on vehicles will ultimately be passed on to passengers.

However, toll roads have been there in this part of the world since ancient times, around 4th century BC. Tolls were levied on travellers, carts and horses in order to recoup the money spent on maintenance of roads. The system has continued throughout ages and is still followed all over the world. Vehicles have to pay tolls depending on their axle loads. In fact, the prime minister's directive comes following the approval of about Tk 8.0 billion for maintenance of the Dhaka-Chattogram highway within two years of its construction. On the question of the need for repair and maintenance of the highway within such a short period, the complaint that has come to the fore is the running of overloaded trucks or heavier axle loads than the highway can sustain.

If this is the case, the proposed construction of 21 axle centres on the country's highways at a cost of 16.30 billion, on paper, looks highly pragmatic. But unless the controllers of the axle control centres are honest, the malpractice of giving green signals to heavier axle loads will go on.

So, all this boils down to a single point of making the system perfect. For maintenance of the country's highways, arrangement for a permanent source of income from those is quite logical. However, the national highways have to be so in the true sense of the term. In order to do away with unnecessary delay and malpractices at toll plazas, the system can be digitised. This means introduction of e-toll can be the right option.

In this connection, the administration can be smarter by inviting consortiums to take responsibility of a national highway separately or segments of one or the other individually. This way some highways in India have been constructed or expanded from two lanes to four lanes or six lanes. The process is still going on. Companies or consortiums partner with the government on a build-own-operate-transfer (BOOT) basis. The stake is high for everyone and therefore the system works quite well. Bangladesh can as well adopt the same strategy in order to build its infrastructure. Have not the flyovers in the capital taken off on the basis of this system? This should be replicated in case of national highways.