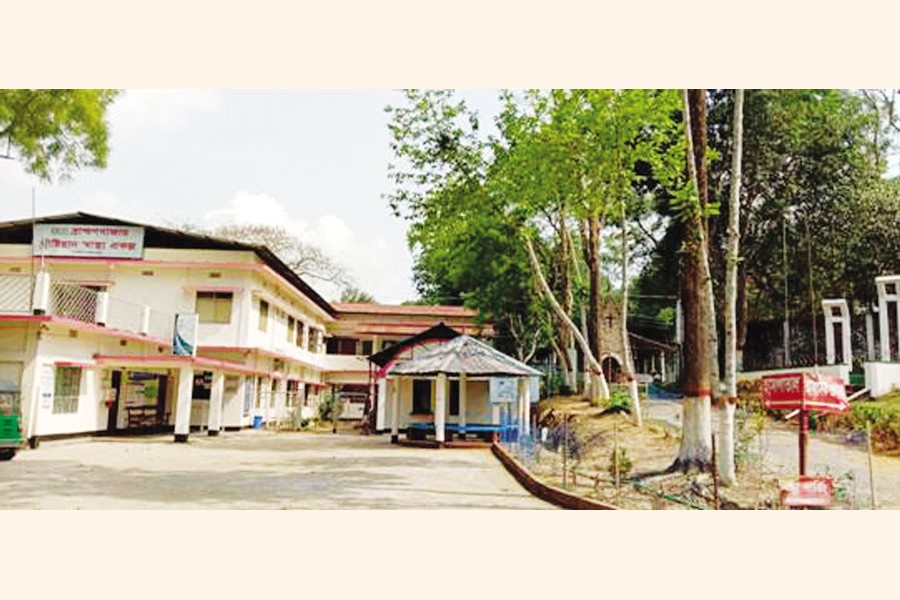 In the face of an acute shortage of trained professionals, ensuring healthcare for a population of 168 million in Bangladesh remains a major challenge for the nation. A major portion of the population are living far from the access to minimum health services. The country has only 6 doctors, nurses, and midwives for every 10,000 population, according to the latest report of a health bulletin published yearly by the Health Ministry. The current doctor-patient ratio in Bangladesh is only 5.26 to 10,000, which places the country in the second position from the bottom, among the South Asian countries, according to the WHO.
In such a situation Brahmanbazar Christian Health Project (BCHP), widely known as Brahmanbazar Christian Mission Hospital is playing its part as an ideal health care institution in the district of Moulvibazar. Geographically BCHP is situated in the heart of Kulaura upazila which is known as the biggest upazila in Moulvibazar district acquiring 545 sqm. of land. The area does not have adequate health services for the poor and disadvantaged group. BCHP started its journey in 1991. The Norweigian Santal Mission started it to serve the most vulnerable and ethnic community here, so that they could receive healthcare services with low-cost facilities. It has been serving local poor community people with its full time resident medical officer, general surgeon, gynae surgeon, a group of SACMO and skilled nurses. In addition, specialist doctors from reputed government and non-government hospitals are attending the hospital every weekend. It has a modern pathology unit, skilled technologists and a medicine store, and it has the largest Operation Theater (OT) of the district.
It provides services through its PHC with different projects and Training Program including Mother and Child Care, especially for pregnant women, lactating mothers, and children. In addition, BCHP renders its services for all the people of the community in the areas of Moulvibazar and nearby areas. The target communities are local poor people, and the backward community people from all over the country; however, the primary mission is to reach out to the community people of Kulaura including Tribal (Khasia) and Tea Estate Labour Community. According to the statistics, Kulaura is the biggest Khasia dominant community e.g. 60 out of 71 Khasia Punjees (Sylhet, Moulvibazar, Sreemongal & Sunamgonj) are located in Moulavibazar district. The Khasia people live together under the local rules of their Headman and Mantri. The area they live in is called Punjee (village) which is around 30 minutes to 2 hours of walk on the zigzag and hilly was from the local road.
The other group of people is the tea garden labourer community, who are known as the most vulnerable people. Most of the tea garden workers inherited their slavery from their parents. Considering the latest agreement in 2020, permanent workers are getting taka 120 per day but the data collected from the labourers in 2018 show that the daily wage of the workers is taka 102 irrespective of permanent, casual, male, female and adolescent workers. That means the average monthly wage of the workers is 2652 plus a simple ration. The income of a tea worker stands at Tk 49,645 ($584), equivalent to Tk 137 ($1.6) per day for a family which is far below the international poverty line.
For the sake of its geographic location BCHP has abundant opportunities to help poor and marginalized community people along with the tea-estate labour community and Khasia Punjee (village).   It always stays beside the local and poor community people to reduce maternal deaths. The study paper Factors Associated with Maternal Deaths in a Hard-To-Reach Marginalized Rural Community of Bangladesh: A Cross-Sectional Study reports that the majority of the mothers who died in the tea gardens delivered their babies at home (80%), many of whom also died at home (40%). Only 27% of women who died in the tea gardens received four or more antenatal care visits. Postpartum hemorrhage was found to be the leading cause of death (47%). Thus BCHP adopts a number of activities to be supportive for the “sustainable development goal (SDG) that has been set for maternal mortality rate (MMR) at 70/100,000 live births in Bangladesh.
BCHP not only ensures healthcare services to the people; it also contributes to national health care services by producing a number of midwives, rural health workers, village doctors and traditional birth attendants. A number of midwives, rural health workers, village doctors and TBA are working in different regions of the country. On February 9, 2022 was arranged a free medical camp at the Panai Punjee in Kulaura Thana, Moulvibazar. During the medical camp Panai Punji Headman Mr. Kolbat says, “There are about 100 families living in this punjee. Addison (a young man who was trained on Rural Health by BCHP) has been the only primary health care service provider in this punjee since the completion of his course from BCHP. Addison advises us when, how and where we should go for treatment. We are very much grateful to Addison and BCHP. If we get more health workers like him for other punjees, our people will be happy.”  It is noted here that a patient from Panai punjee needs to cross 3 top hills (around 3 kilometers) on foot to reach the local road. The distance from the local road to the hospital is about 22 kilometres. They have no other option than this.
BCHP has taken different measures to stay beside the people more closely. The local Chairman of Brahmanbazar union Prof Momdud Hossain has been pleased with the work of BCHP. In the future he will extend his allout cooperation to the hospital. In a study paper it was reported, “Every year in Bangladesh, approximately 5200 mothers die (172 maternal deaths/100,000 live births) due to maternal complications. The death rate is much higher in hard-to-reach areas and underprivileged communities, such as Bangladesh’s tea gardens. The women living in the tea garden areas are deprived of quality health care services due to inadequate knowledge, education, and access to health care services. Poverty and early marriage, followed by early pregnancy, are also triggering factors of maternal deaths in this community”.