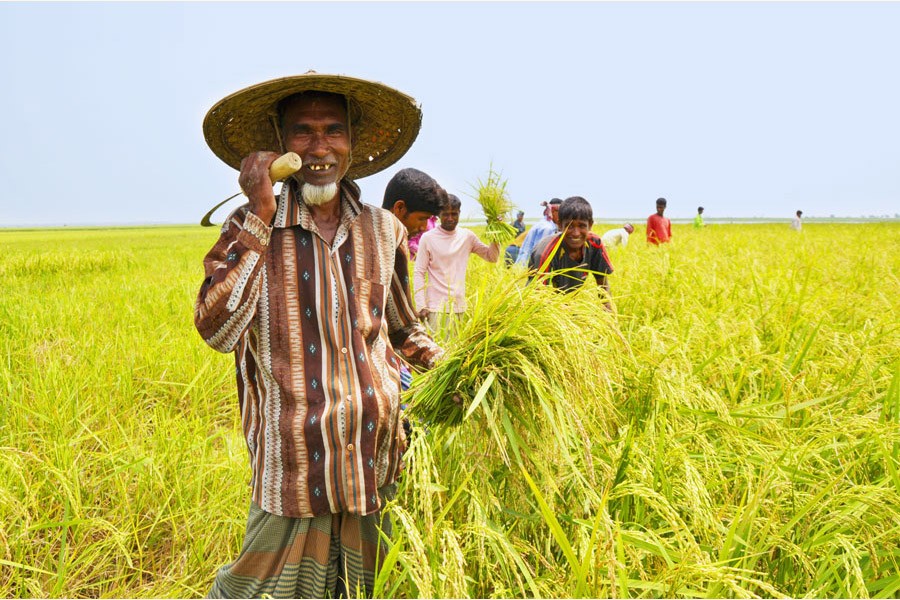 Paddy growers are now demanding fair prices for their produce instead of celebrating Nabanno, a post-harvest traditional festival, as the crop sells at rates lower than their production cost. Forty-year-old marginal farmer Helal Miah of Chawlkpara village in Sarishabari Upazila under Jamalpur district talked to this scribe on phone with a heavy heart. The farmer cursed his luck. "Right now we are seriously thinking of leaving our farming profession," the aggrieved peasant said.

He said the farmers in the region planned to abandon this profession next time as they cannot survive with the proceeds from the sale of their paddy. Currently, the production cost has doubled. Once upon a time, they dreamt of buying clothes for any festival after selling the paddy. "But, those golden days are gone now," the farmer told this scribe with teary eyes.

Terming the price very shameful for the growers, Mr Helal said he was not cultivating paddy for the sake of the country. Rather, he was doing it for the sake of its survival. He seldom got any government support in doing it. He said with a sigh that it seemed even the country's influential leaders and think-tanks could never realize how the farmers were leading their miserable life with no fair prices for paddy this season.

According to the farmer, around Tk 31,350 is needed up to be spent up to the harvest level. This production cost of paddy is estimated for each acre of land. But the paddy price per acre is approximately Tk 26,400. The production cost gradually goes up due to excessive labor and processing cost. It is leaving the farmers frustrated to a great extent. With this price, how will the farmers decide to observe the Nobanno festival that marks harvest of new crops.

This situation as narrated by the farmer left this scribe speechless. He could not utter a word. The paddy growers across the country are suffering. This is really shocking, as the country will suffer a lot, if the farmers do not grow crops like paddy, the staple food of the people here. Once, Bangladesh was known for its production of a cash-crop like jute. But now the crop has lost its importance. It will be unfortunate if paddy meets the same fate and the agrarian land turns into barren and crop-less fields.

In the recent couple of years Bangladesh gained self-reliance in the food sector after nearly fifty years of independence. But, this long-desired achievement is going to slip into oblivion. As already noticed, the farmers threatened to stop food production. That would prove Bangladesh globally as a food-deficit country. Their rights are not properly taken into consideration at all. A section of people who are involved in the agrarian profession for long are in a race to switch over to other income generating sources. If the trend continues, the country's desire to become a middle income country might not be achieved.

A study done by Rome-based Food and Agriculture Organisation (FAO) has revealed that the agriculture sector contributed around 25 per cent and 14 per cent in 1995 and 2016 respectively to the country's gross domestic product (GDP). Moreover, employment involved in the sector accounted for 66.8 per cent and 41.1 per cent in 1995 and 2016 respectively. Despite a lot of obstacles to the sector, the nation now manages three meals a day by cultivating paddy that was truly dreamt of once upon a time. Bangladesh faced famine in 1974 due to lack of food. Then, thousands of people across the country had remained hungry.

It is said that Bangladesh has attained self-reliance in producing food grains. Yet, millions of tonnes of rice are imported from different countries. Why import now? If the state thinks about the farmers' interest, the country must go for export of rice. According to the FAO study in 2016, Japan earned reputation by utilising its only around 4,471 hectares of agriculture land out of 36,456 hectares of total land area. But, Bangladesh is facing a hurdle to achieving success by cultivating 9,194 hectares of agriculture land out of a land area of 13,017 hectares.

Where Japan and many developed economies are currently attaching more importance to promoting the agriculture sector, any intension of Bangladesh to boost the sector is rarely noticed. The state has a role to play to protect the interest of marginal farmers. The legislators must look after them. The government should stand by the farmers immediately and uphold their right to fair prices for their paddy and other crops. If we want to be an export-oriented country, the agriculture sector must be nurtured carefully by supplying the required raw materials for production of crops.

Right now, the government should take a bold decision to save anyhow the ripe paddy lying in the fields. The government might directly purchase paddy from the growers at fair prices as demanded by the farmers.

If Thomas Robert Malthus' theory on food production has any relevance to the present situation in the country, the people of this land might face a food shortage soon, no doubt. So, there is an opportunity to protect our farmers by increasing allocations in the upcoming budget for the fiscal year 2019-2020. We may miss the opportunity of becoming a middle income country, if the agricultural sector as well as the farmers' interest do not get due attention.

Md Mazadul Hoque is currently serving at Social Islami Bank Ltd and he is a member of Bangladesh Economic Association (BEA).