G7 summit ends with a veneer of unity 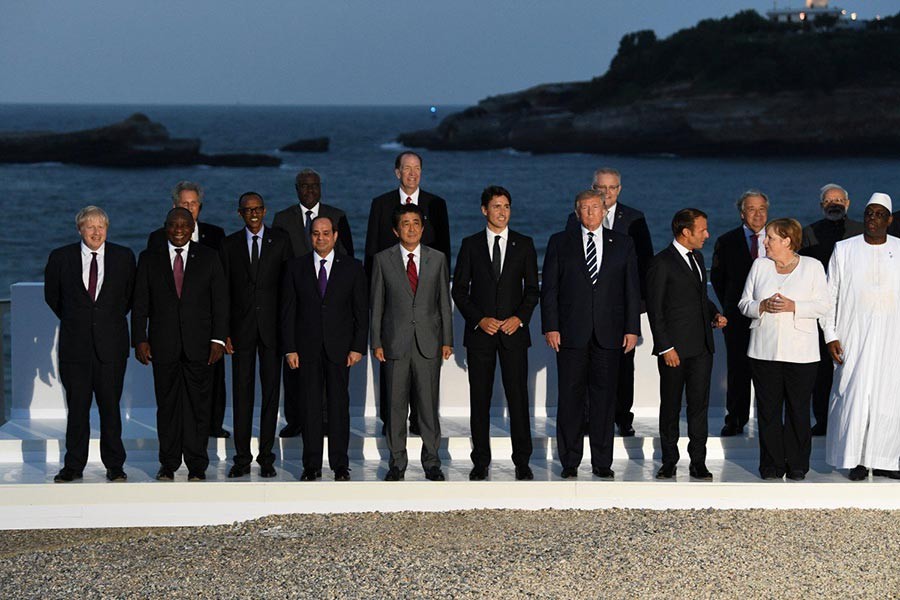 Troubled by street demonstrations in Paris on a regular basis for the last few months, President Emmanuel Macron made a wise decision to convene the recently concluded annual G7 Summit in Biarritz on the southwest coast of France overlooking the Bay of Biscay, known for its surfing and therapeutic waters. This enabled him to avoid the Gilets Jaunes movement and the possibility of their leaders disrupting the meeting. The Summit included heads of governments from Canada, France, Germany, Italy, Japan, the United Kingdom (UK) and the United States (US).

There were also informal meetings on the sidelines between these leaders and heads of government from other countries. This included meetings between President Trump and Indian Prime Minister Narendra Modi, and between Trump and Egyptian President Abdel Fattah el-Sisi. Modi used this opportunity to point out that existing problems between India and Pakistan were bilateral in nature and needed to be resolved bilaterally without third-party mediation. The connotation clearly was the changing dimension of the Kashmir factor.

The Biarritz Summit seems to have generated interest and world attention instead of confusion. It was not a repeat of what had happened the last time round in Canada.

The first matter that drew the attention of the Summit was the need to address the issue of the ongoing fires that were raging in the Amazon forest in Brazil. Called "the lungs of the Earth", the Amazon rainforest and its lush trees, it may be mentioned, create roughly 20 per cent of the oxygen on Earth.

President Macron described the fires as an "international crisis" and pushed for prioritising the issue. The severity of the situation was underlined by the fact that according to Brazil's National Institute for Space Research (Inpe), more than 75,000 fires had been recorded in Brazil so far in 2019 - an increase of 85 per cent over 2018, most of them in the Amazon region.

After intensive discussion at the G7 Summit it was agreed to provide logistical and financial support to help fight fires in the Amazon rainforest. A pledge of US$ 22 million was agreed to in this regard. But the Brazilian President, upset with the criticism from G7, turned down this offer because according to him Mr Macron's plan of an "alliance" to "save" the Amazon treated Brazil "as if we were a colony or no man's land".

The severity of the fires and the global outcry eventually prompted response by Brazil's government. President Bolsonaro authorised the military to help tackle the blazes. He eventually agreed to accept the funds offered by G7 if Brazil could control the disbursement of the funds.

The G7 leaders are now being seen in a more positive light. However, President Trump was missing from the session covering climate, biodiversity and oceans during the summit.

The second issue that drew world attention was the sudden arrival of Iranian Foreign Minister Mohammad Javad Zarif in Biarritz. Zarif's surprise appearance appears to have caught the US officials' off-guard. The initial response from Trump was that it was too early for him to meet Zarif. As expected he continued to trash the 2015 Iran nuclear deal, an accord that European leaders have been working to salvage after Trump withdrew from the Agreement in 2018.

It was subsequently revealed that Macron had shared with Trump the possibility of Zarif being around in the conference site in case the United States wanted to have any discussion with the Iranian Minister. This dynamics had been initiated by Macron to try and bring the US President inching closer to a climb-down on tensions with Iran. This effort was obviously undertaken because France and Germany both believe that there needs to be a resolution of the growing tension between the US and Iran. Both believe that the levying of sanctions on Iran was affecting not only the economies of the region and the Persian Gulf but also exacerbating matters and creating instability between Iran and the European nations.

It is clear that Trump at present is slightly less than obdurate on Iran issue. However, the dynamics leading to a possible better understanding between the US and Iran is still far away. This has been reflected in the comment made by Macron in a joint news conference following the conclusion of the G7 Summit. He said that he had told Iranian President Rouhani by telephone that he was convinced that an agreement can be found if he agreed to meet Mr. Trump. He expressed the hope that "in coming weeks… we can manage to make a summit happen". Trump has apparently said that such a meeting was realistic and talks were already underway potentially to provide Iran with credit from various countries to keep its economy afloat.

Following Macron's observations, Rouhani in a televised speech at an event in Tehran said that he was always ready for talks, but that "first the US should act by lifting all illegal, unjust and unfair sanctions imposed on Iran." Rouhani also added that if Trump's only concern was Iran gaining nuclear weapons, there was "nothing to worry about."

It would be worthwhile to note here that both the US and Iranian leaders are due to attend the forthcoming UN General Assembly session that will start in New York from the third Tuesday of September.

The next subject that drew the attention of the six out of seven members of G7 was the way in which the US was handling its existing differences with China on matters of trade. They made it quite clear that they were worried with the sharp changes and lack of agreement pertaining to several facets of trade between these two countries.

A required solution in this regard was further heightened through an agreement in principle among G7 members on the taxation of tech giants, a long-standing subject of friction between France and the US which has led to threats of taxation on French products like wine.

The resolution of this dispute drew careful attention of the Summit towards the continuing issues that were creating problems between China and the USA with regard not only to investment but also different elements related to industrialisation.

The trade war with China is escalating at a nervous moment for the US Administration with growth slowing in Europe and some indicators suggesting the US could also experience a slowdown. Concern along these lines mounted after China's retaliatory move on tariffs on August 23, which was met with an extraordinary tirade by Trump against Beijing and Federal Reserve Chief Jerome Powell. This raised questions about coherence in US on economic policy and how a possible world recession might have to be met during the forthcoming US presidential election year.

However, during the Summit Trump drew attention to the fact that despite the worsening trade imbroglio with China, good economic news had been created through the possibility of a free trade deal with Japan.

Macron at the end of the Summit tried to ease tensions with a statement that he and others in the G7 were hoping very much that an agreement is found between the US and China, the two most important economic powers, as "we have seen some positive signals during the last hours of discussion here."

The fact that the Summit ended without a final communique underlined Macron's cleverness about creating a semblance of unity rather than discord as happened during the 44th Summit last year in Canada. Macron will be remembered for creating a veneer that would enable participants to call the glass half full rather than half empty.