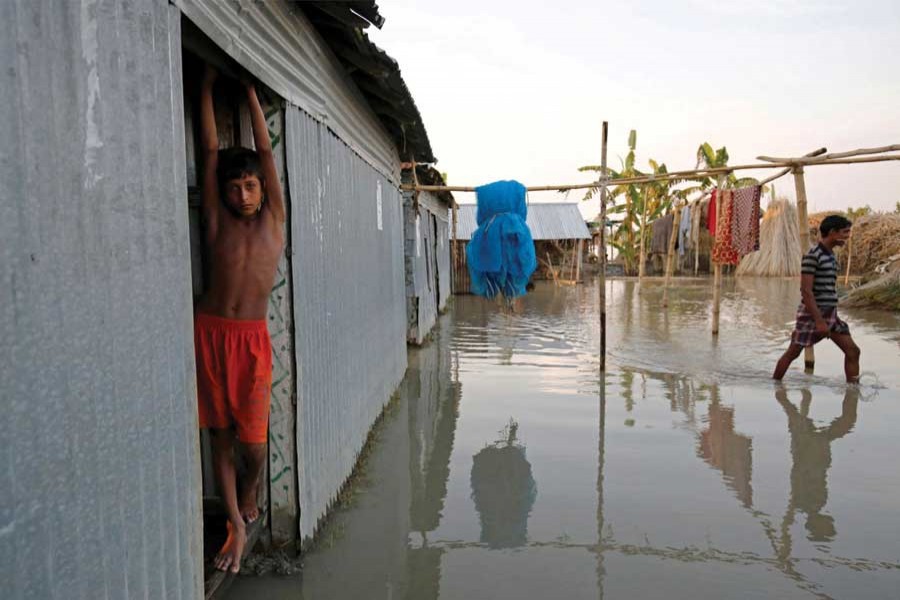 The success of Bangladesh in managing and handling natural disasters is remarkable. Nevertheless, it is a never-ending challenge. Be it cyclone or floods, every time it brings a new challenge due to some changed pattern of human sufferings and damages of livestock, crops and property. That's why the policymakers and local administration need to be more vigilant and take adequate preparation to manage any natural disaster.

The current monsoon flooding, set in during the last week of June, has already inundated over 50,000 square km of land which is almost one-third of the country.  More than five million people across 31 districts are affected and another five million are now at risk of suffering prolonged floods. Already around 100,000 people are now staying in some 1,400 flood shelters in different districts. As these shelters are not enough to accommodate a large number of affected people, some of them have built temporary shelters on embankments and roads, using polythene sheets. Many of those shelters, however, went under water as main rivers keep swelling and also eroding banks.

Hit by floods, people in many areas have already lost their livestock, crops and properties. These are mostly irreparable damages and meagre relief or one-time assistance will not serve to recover their losses at all.

The current flood is a double blow to the country which is also fighting against the spread of deadly coronavirus or Covid-19.  It has already taken a serious toll on the country's vulnerable healthcare infrastructure and livelihoods of people. A large number of people trapped into poverty have become vulnerable. Inadequate, mismanaged and poorly distributed one-time cash assistance from the government left many of them not adequately covered by social safety net. Economists and researchers have already cautioned that poverty rate may jump to 41.0 per cent from current 20.50 per cent due to negative impact of Covid-19.

No doubt, the situation is turning worse due to prolonged floods with the outbreak of water-borne diseases. While some 900 medical teams providing primary treatment are currently working to serve the flood-affected people, it is inadequate. The number of medical team needs to be increased along with adequate supply of medicine.

The Seventh Five-Year Plan (7FYP) has outlined a number of steps to deal with inevitable floods mentioning that floods pose a serious threat as two-third area of the country is less than 5.0 meters above sea level. It also added that a rise in sea level will make an additional 14.0 per cent of the land extremely vulnerable to floods by 2030. Some 61.0 per cent of the land area is vulnerable to flood, while 23.0 per cent is affected by flash floods in a normal flooding year.

The Delta Plan 2100, however, sets a target to reduce the average flood extent to 25 per cent of the total area by 2020 and the number of flood vulnerable people to 66.0 million in 2020 from 88.0 million in 2015. The current floods are the first test of the government's preparedness to implement the measures outlined and achieve the projections by the delta plan to keep the damage as low as possible.