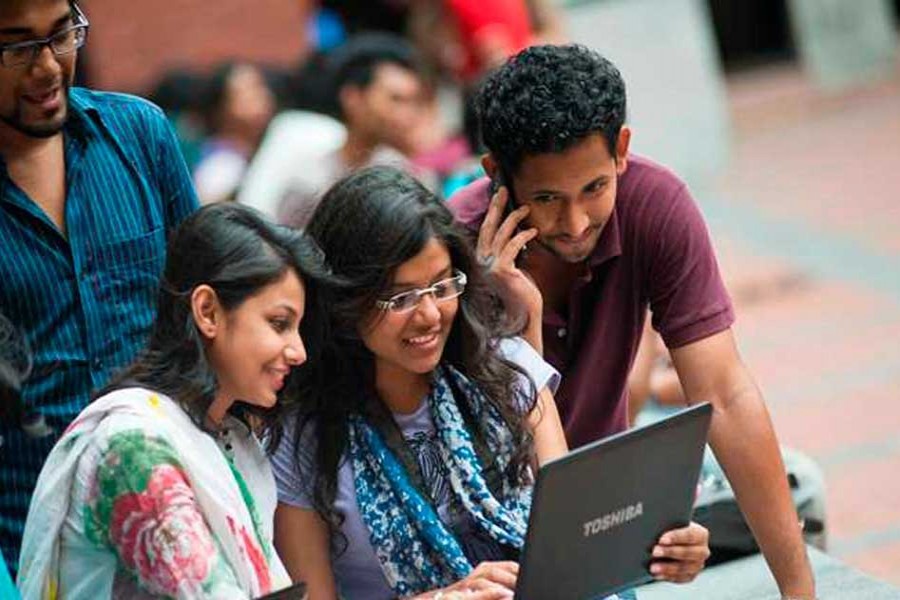 The universities -one after another -are making news for all the wrong reasons. When teachers and scholars of some of the world's prestigious centres of tertiary education are becoming recipients of the Nobel Prize, vice-chancellors (VCs) or teachers of a number of universities in this country have either been compelled to resign or stubbornly clinging to their posts in the face of student protests against their alleged involvement in academic and administrative irregularities together with financial misappropriation.

A University Grant Commission (UGC) investigation found truth in the charges brought against the VC of Bangabandhu Sheikh Mujibur Rahman Science and Technology University at Gopalganj and he had to leave the campus under police escort. Charges against the VC of the Jahangirnagar University are no less -if not more -serious. Sharing money from allocation for development project with leaders of the ruling party's student organisation is not a complaint but a confession from the recipients. The ouster of president and general secretary of the Bangladesh Chhatra League is alleged to be a consequence of the exchange of money between two members of the VC's family and the duo at a meeting in her residence. A former Dhaka University VC and now a faculty member indicated, while speaking at a function on the National Education Day, that sharing money with student leaders from development projects is not limited to the JU only, but it is also happening elsewhere.

Again, the vice-chancellor of Begum Rokeya University, who also happens to be the registrar of that university also reportedly travelled there from Dhaka for a few days in a month. In his absence, administrative works suffer and the staff members feel no compulsion to attend duties regularly and on time.

Then eight teachers of Kabi Kazi Nazrul Islam University are scheduled to travel to the supplying countries of elevators for inspection of those devices. Intriguingly, except two the rest six are not competent to do the job. Theirs is allegedly a pleasure trip. In this context, a teacher of Dhaka University tried to arrange a written test to be attended by 650,000 candidates under the social welfare ministry bypassing the dean of the pharmacy faculty. When the dean communicated with the ministry concerned to let it know that he would not be liable for any irregularities involved in the process, the test to be held at the divisional level was postponed. By this time, however, the question papers have been sent to the divisions concerned.

Then come the shocking reports that the vice-chancellor of the Bangladesh University of Engineering and Technology (BUET) did not feel the need to rush to the spot where Abrar Fahad, a second year electrical engineering was murdered by leaders of the student wing of the ruling party. Students of universities all across the country expressed their strongest condemnation of this brutal killing in one voice and at the same time they also denounced the VC's role.

These are some of the examples of moral turpitude on the part of the highly educated people at the helm of university affairs. Now the question is if the highest seats of learning are safe and secure at the hands of such highly educated but morally debased or unfeeling people. Respected educationist Muhammed Zafar Iqbal wondered why university teachers are so keen to grace the VC's post. Indeed, university teachers ought to be scholars in the first place. The VC's is an administrative job but on top of everything s/he is the custodian of thousands of students.

Unfortunately, most VCs have neither been accomplished scholars nor caring guardians but appointees who are primarily concerned about toeing lines of their benefactors. When they should have been bargaining for adequate allocation for advanced studies, research and experiments in different branches of knowledge, they are busy advancing self-interests. That the universities of the country are languishing at the bottom in world ranking is unsurprising.

Extortion, floating tenders for development projects, attacks on rival student organisation or their total eviction from dormitories -not to rule out internecine feuds -- are some of the undesirable engagements student leaders are interested in. The legacy goes back to the autocratic rules but by this time this should have been a thing of the past. That most public universities at times give the impression of a war zone instead of peaceful centres of advanced studies and scholarship hardly makes the nation proud.

Why should the Chhatra League with their proud history and unrivalled role in the national movements now carry forward the vilest legacy of killing one for dissent? They have no reason to play the role of vigilante like the goons of the Chhatra Shibir did until the late 1990's. The murder of Abrar has taken place when the political signal is clear that the administration is all set to rein in corruption, immoral business and excesses by leaders of various front organisations of the ruling party. What a terrible mindset the so-called students leaders have developed that they did not have any qualm about killing a fellow student! They have cut short the life and dream of Abrar, his parents and near and dear ones. It is a national loss. The culture of impunity indulged in by successive governments and university authorities must take the blame for not putting the genie into the pitcher.