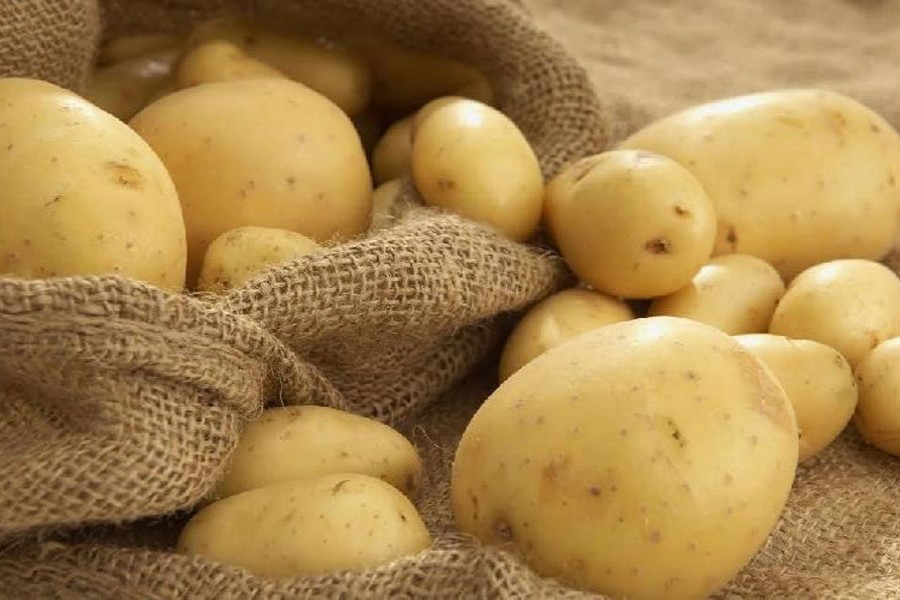 The fact that the country produces close to 11 million tonnes of potato annually - a surplus of approximately 4.0 million tonnes -- is no mean achievement. The shocking part, however, is that most of the surplus stock which could have fetched substantial earnings from export gets wasted. While dearth of adequate storage facilities denies the growers luck from bumper harvest, absence of effective steps on the part of the concerned authorities to facilitate overseas marketing is responsible for the useless glut.

For some years now, good harvest of potatoes has turned out to be the cause of the growers' misery. While concerned quarters put it on lack of planning, which among others includes dearth of sufficient storage facilities in the vicinities of potato growing areas, the burden of bumper harvest falls squarely on the farmers who are extremely ill at ease with their produce in a severely under-priced domestic market.

Not only potatoes, the same is often the case with some other horticulture products such as tomatoes, leafy vegetables, pineapples etc. The case of potatoes is perhaps more distressing than the others.

Bangladesh Bureau of Statistics (BBS) data shows that over the years, despite losses incurred by farmers, land area for potato cultivation has been on the rise which goes to explain that farmers still prefer to stick to one of their favourite and relatively easy-to-grow crops. According to the Department of Agriculture Extension (DAE), total land area under potato cultivation has been on the increase since 2012 but for a slight fall in 2017. Production, however, has been consistently on the rise reaching 10.09 million tonnes in 2018.  Unfortunately, increased harvest has only added to the loss of the farmers. Unprecedented price slump has caused many farmers in the northern zones to sell their produce immediately after harvest.

Low demand in the wake of bumper production is the main reason for the losses of both the farmers and the cold storage owners. According to a member of the Bangladesh Cold Storage Association (BCSA), 1.5 million tonnes of potatoes remained unsold before the beginning of the current season because of low demand which caused the association members Tk 28.12 billion in losses. The same source mentioned that farmers incurred losses to the tune of Tk 33.25 billion by selling 5.3 million tonnes of potato at only Tk 700 a sack (80-kg sack) against the production cost of Tk 1400. President of the BCSA said the country's 416 cold storage owners incurred Tk 63.78 billion in losses from cash credit and project loans on account of reducing the storage rent and providing loans to farmers. Reportedly, storage rent was reduced substantially to Tk 250 per sack from Tk 400 last season to encourage farmers take delivery of their produce.

The pertinent question thus: why is it so? Potato is a staple in some countries of East Europe. Russia and the now-independent states under the former Soviet Union, the main consumers of potatoes, are largely dependent on imports. Russia is, however, the third largest producer of potatoes, next to China and India.  Bangladesh, the seventh largest producer, has been exporting potatoes to some counties, including Russia, in small volumes. Exporting is now faced with serious snags, particularly to Russia which had put a temporary ban on potatoes from Bangladesh following detection of fungal diseases. Absence of accredited laboratories in Bangladesh for pre-shipment testing in conformity with Russian standards is also a reason to keep exports on hold. Exports to the East European markets are on since 2011. But lack of lab testing facility does pose as a serious barrier for growth of export.

Concerned quarters believe exports could bring a respite to the farmers if there is a concerted move to grow potato keeping in view the market-specific choices and standards set by the importing countries, particularly in respect of sanitary and phytosanitary requirements. An organised move to export will, in all probability, generate greater demand for quality produce which would be reflected in prices at growers' level and country would be able to save huge quantities of potatoes now being wasted.

A recent move appears to suggest that the authorities are seriously thinking of a change in the overall potato scenario. The government has formed a seven-member committee comprising officials from the agriculture ministry, commerce ministry, Department of Agricultural Extension (DAE), Bangladesh Agricultural Research Institute and Bangladesh Agriculture Development Corporation to promote potato exports and explore new markets abroad.

Understandably, the main issue of concern is to take care of the surplus stock. Exporting is obviously the only way out. But going for export would involve a whole package of activities and reforms - some of which are bound to be cost-intensive, such as setting up accredited testing labs and constructing adequate number of cold storages.

Given the prospect of exporting and its multiplier effect on the economy and the livelihood of the growers, one has reasons to believe that the government would find merit in investing in a big scale on potato export.