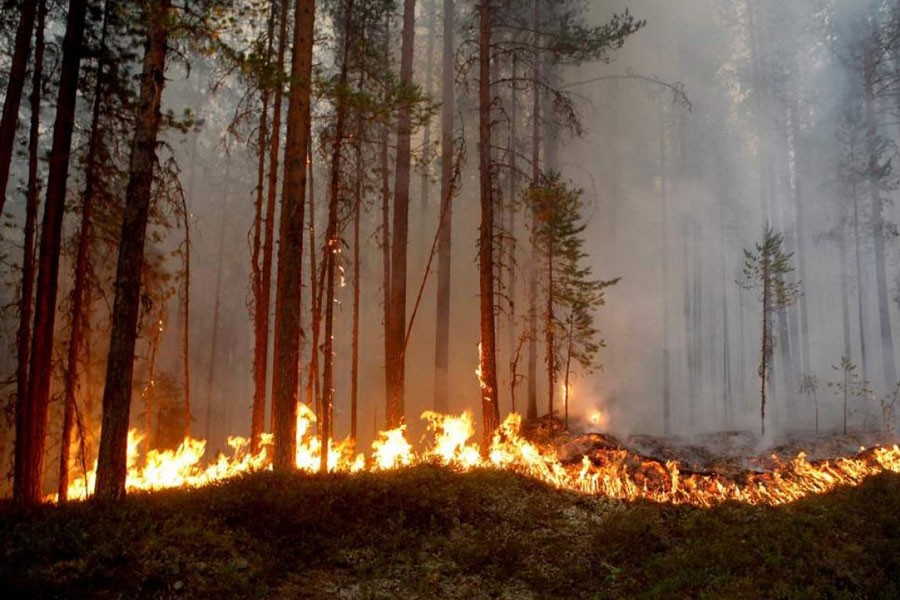 Global warming is the effect when the earth heats up. It happens when greenhouse gases (carbon dioxide, water vapour, nitrous oxide, and methane) trap heat and light from the sun in the earth's atmosphere, which increases the temperature. This hurts many people, animals, and plants. Many cannot take the change, so they die.

The greenhouse effect is when the temperature rises because the sun's heat and light is trapped in the earth's atmosphere. This is like when heat is trapped in a car. On a very hot day, the car gets hotter when it is out in the parking lot. This is because the heat and light from the sun can get into the car, by going through the windows, but it can't get back out. This is what the greenhouse effect does to the earth. The heat and light can get through the atmosphere, but it can't get out. As a result, the temperature rises.

Effects of Global Warming--Heat Waves: As extreme heat waves become more common, there is an increased risk of heat-related illness and death. The elderly, the very young and diabetics face the highest threat. The U.S. Global Change Research Program report presents two possible scenarios, based on whether emissions over the next century are low or high. Under the high emissions version, average temperatures rise 6 to 11 degrees Farenheit, increasing the number of days each year with temperatures in excess of 100 F. By 2100, parts of Texas that typically reach 100 F for 10 to 20 days annually are expected to see 100 days with temperatures exceeding 100 F. In the same period, Los Angeles' heat wave days would double and Chicago's would quadruple.

Poor Air Quality: Air masses tend to stagnate with warmer temperatures, making it easier for smog to form and compromising air quality. In California, smog is projected to form more often, last longer and be more intense. By 2100, Los Angeles and the San Joaquin Valley could have a 75 to 85 per cent increase in smog days under the high emissions scenario and a 25 to 35 per cent spike under the lower emissions scenario. Breathing smog triggers asthma attacks, irritates lungs and is associated with premature death, according to the U.S. Global Change Research Program report.

Extreme Weather: Events like tornadoes, floods and hurricanes are predicted to increase as a result of global warming, with a corresponding rise in storm-related injuries, illnesses, emotional trauma and death. The U.S. Global Change Research Program report noted that in the 2005 hurricane season more than 2,000 people were killed, more than double the seasonal average of the past 65 years. After extreme weather events, people suffer from carbon monoxide poisoning resulting from use of portable generators when storms knock out power. Additionally, evacuees suffer intestinal illness, depression and post-traumatic stress disorder.

Besides it has a lot of effects. Global warming is affecting many parts of the world. Global warming makes the sea rise, and when the sea rises, the water covers many low-land islands. This is a big problem for many of the plants, animals, and people on islands. The water covers the plants and causes some of them to die. When they die, the animals lose a source of food, along with their habitat. Although animals have a better ability to adapt to what happens than plants do, they may die also. When the plants and animals die, people lose two sources of food, plant food and animal food. They may also lose their homes. As a result, they would also have to leave the area or die. This would be called a break in the food chain, or a chain reaction, one thing happening that leads to another and so on.

Global warming is doing many things to people as well as animals and plants. It is killing algae, but it is also destroying many huge forests. The pollution that causes global warming is linked to acid rain. Acid rain gradually destroys almost everything it touches. Global warming is also causing many more fires that wipe out whole forests. This happens because global warming can make the earth very hot. In forests, some plants and tree leaves can be so dry that they catch fire.

The writer is an environment analyst and Associate Member of Bangladesh Economic Association.