Digital platforms in the dock: Antitrust and breach of data privacy 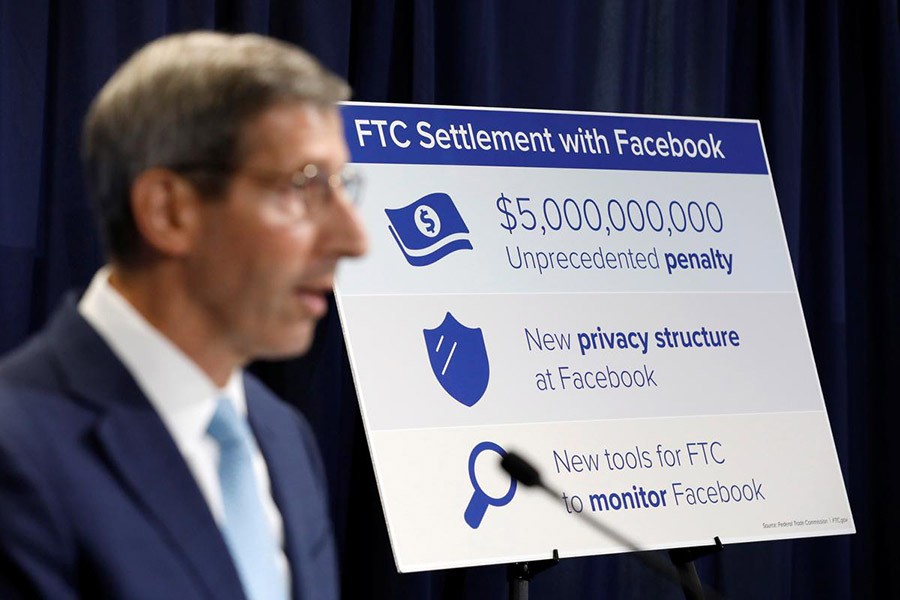 US Federal Trade Commission (FTC) Chairman Joe Simons announces that Facebook Inc has agreed to a settlement of allegations it mishandled user privacy during a news conference at FTC Headquarters in Washington, USA on, July 24, 2019. —Photo: Reuters

Service delivery over the internet is a growing business now. According to different market research estimates, global digital advertisement spending is likely to grow over $600 billion by 2025. And the share of the online platform of this revenue has been increasing, reaching over 30 per cent in 2018 from around 13 per cent in 2010. It is estimated that the global online advertising market was worth US$ 200 Billion in 2018.

Online advertising refers to marketing and advertising technique that employs the internet hosted websites to promote services and products. Advertisement spending in developing countries is also significant. For example, Bangladesh's total advertisement market size is worth US$150 million. It's being reported that companies in Bangladesh are spending nearly US$ 100 million every year for digital marketing on the platforms of Facebook and Google to reach their target audience. The rapid proliferation of smartphones, frequent visits of potential customers to websites containing targeted contents, and increasing sophistication of algorithms have made online advertising far more effective than conventional platforms like TVs or billboards.

Unlike in the past, the online advertising market is virtually monopolised by two global players: Google and Facebook. Such monopolisation raises important questions. How did they succeed? With high market shares, are these companies abusing market power throttling competition and unfairly treating users? How are different countries responding to concerns pertaining to market power, antitrust, and other competition issues?

The online advertising market has a natural tendency of monopoly. Due to scale, scope, and network externality effects, both Google and Facebook have monopolised their respective market spaces. For example, as high as 90 per cent of search traffic is destined to Google. On the other hand, for social networking, Facebook is unparalleled.

Once invisible hands of the market fail to govern competition, regulators rely on one of the great principles of competition law: with great power comes great responsibility. It's being argued that with a market share of around 90 per cent in online search business, Google has a responsibility to offer fair access to Google ads. But, unfortunately, it seems that digital monopolies like Google or Facebook are failing to meet the expectation of fairness. The advertising revenues that fuel profits for Google and Facebook are increasingly coming under antitrust scrutiny, often prompted by complaints from media companies as advertising spend shifts to the web. Regulators of France, Germany, Holland, and the United Kingdom (UK) have been investigating antitrust issues pertaining to Google's ad business. At the European Union (EU) level, competition commission has been very active in investigating anticompetitive behaviour of Google, thwarting advertising rivals, and slapping fine.

As of March 2019, the EU slapped a total $9.3 billion fine to Google. Among the antitrust issues, the EU has fined Google for abusing its dominant position by forcing customers of its AdSense business to sign contracts stating they would not accept advertising from rival search engines. It's being argued, "The misconduct lasted over ten years and denied other companies the possibility to compete on the merits and to innovate." EU also fined Google a record €4.3 billion last year for abusing its market dominance in mobile, and €2.4 billion the year before that for manipulating shopping search results.

In addition to the EU competition commission, individual member countries have also started investigating antitrust issues and slapping fine to Google. For example, a four-year-long investigation of France's competition watchdog has led to fining Google $167 million for opaque and unpredictable advertising rules. Among developing countries, India's antitrust watchdog took the lead imposing "$21.17 million fine on Google for "search bias" and abuse of its dominant position.

On the other hand, the Federal Trade Commission of the USA has fined Facebook a record $5.0 billion for violating consumers' privacy, which is almost 20 times greater than the largest privacy or data security penalty ever imposed worldwide. It's being speculated that Facebook will likely face millions in fines in the EU. Among others, Ireland's Data Protection Commission has brought 11 cases against the social media giant based on the GDPR General Data Protection Regulation. To protect citizens in the digital space, the EU has updated data protection regulations. According to this new regulation, Internet users have the right to know how their data is collected and used, and they also have the right to know how long the data will be retained. It's already widely known that Facebook was accused of supplying the personal data of over 87 million people for illegal data mining to the analytics firm Cambridge Analytica.

Antitrust and data protection issues are not only limited to these two giants. As we keep expanding our services over the Internet, such issues are expected to get worse. Like Europeans and Americans, citizens of developing countries are equally vulnerable to dominant market position and data piracy issues. For example, Google and Facebook have been increasingly taking away ad revenue from every country. Micro and small e-commerce platforms in developing countries are running over Facebook pages, exposing data related to customer preferences and purchases behaviours.

Although competition and privacy watchdogs of the EU and the USA are getting active to protect their citizens, what about the protection of citizens of developing and least developed countries? The EU had to gather data and run investigation over ten years to establish a legally defendable case of fining Google. On the one hand, watchdogs of developing countries are very weak, both professionally and financially. They often fail to monitor and investigate pertinent issues for protecting their citizens from malpractices of these global monopolies in the digital space.

The very recent Google litigation which involved antitrust systems of the USA, EU, India, Argentina, Brazil, and Taiwan has shown how competition has gone global. The fining of Facebook for data privacy indicates that it's a global issue too. How to enact worldwide antitrust and privacy legislation to sanction corporations involved in anticompetitive and privacy violation practices is an important issue. Like the EU or the USA, each country, particularly developing ones, cannot afford to have strong watchdogs to regulate global monopolies like Google and Facebook.

Given the regulatory weaknesses of developing countries and lack of international collaboration in dealing with antitrust and data privacy issues, the progression of digitisation has been leading to gradual taking over of local businesses by global ones. Moreover, breach of data privacy  is making citizens vulnerable to manipulation, discrimination and harassment, consequently leading to increasing inequality among countries and fellow human beings.

M Rokonuzzaman, PhD is an academic and researcher on technology, innovation and policy.