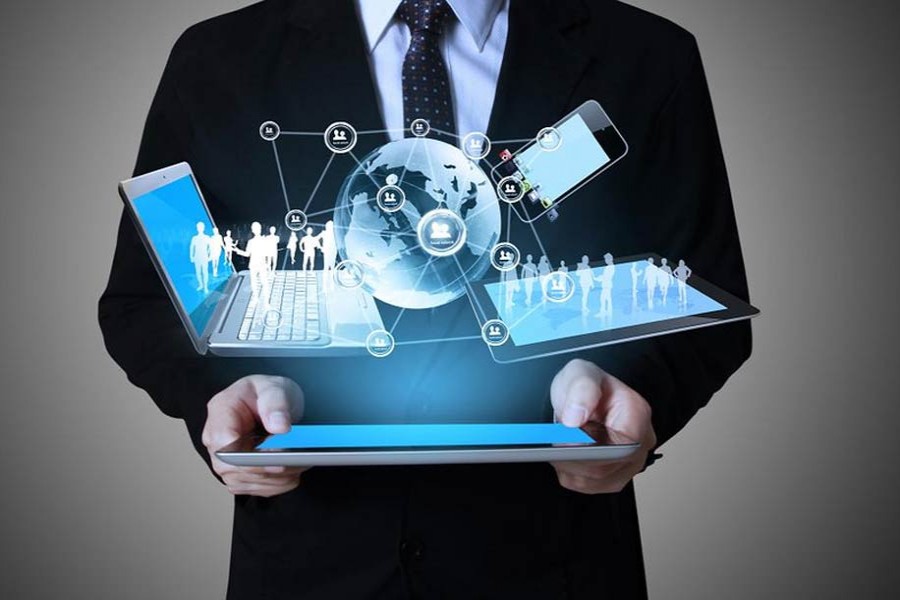 In this last piece of the digitalisation series, attention turns to Bangladesh. State Minister for Information and Communications Technologies Zunaid Ahmad Palak describes the 10-year Bangladesh drive to digitalise as a "story of transformation" (http:// albd.org/articles/ news/32630/Digital-Bangladesh-A-Story-..., July 17, 2019). There is a lot to support his argument. Yet, as the digitalisation process ripples across the country, both obvious pockets of resistance or collapse, and emergent arenas of incompatibilities have begun to show their faces. Ironing them out may require nothing short of overhauling institutions and mindsets, a task rarely, if ever, accomplished successfully within a lifetime. In digital language, that's the equivalent of eternity. Maximising our digital benefits requires we not only upgrade our knowledge-base, but also remain in the permanently innovative stream.

All of 'Digital Bangladesh' pillars have stood like a rock. Human resources development, the first, not only embraces the over a half-million university graduates being produced annually, over 10 per cent of whom have opted for IT (information technology) training, but the world's second-largest online work pool has also been cultivated right here, in Bangladesh, according to Oxford Internet Institute. Be that as it may, the country is well on its way to pushing connectivity to its fullest by its 50th birthday anniversary two years later, meaning no citizen will be left out. If we add to that how Bangladesh has become a top-5 Asia-Pacific mobile markets, based on its 93 million subscribers, our middle-income nametag might pale in comparison to this top-notch achievement. That was the second pillar delivering to its maximum. With e-government as the third pillar and ICT (information and communications technologies) industry promotion the fourth, Bangladesh has become not just a 'go-with-the-flow' participant, but a steadfast climber as well, given its priorities and performances. With Palak announcing only this last week the establishment of 12 hi-tech parks, with earlier specifications of Dhaka University and Sylhet as a 'smart' city (where different types of electronic Internet of Things or IOTs collect and analyse data), the country is clearly pressing all its buttons to become a digital 'who's who' player.

What is less talked-about but much more meaningful is how the drive is not just digital, but digital with a human face. The very first pillar testifies to that. In spite of all the routine problems accompanying the deep shift into the Fourth Industrial Revolution realm, with artificial intelligence (AI) as catalyst, Bangladesh has rightfully sought to give its digital climb a mixture of social connections, contexts, comfort zones. With the high intellectual demands of IR 4.0, no upwardly climbing country can truthfully disseminate education, and with it, intellectual skills, that is, cutting-edge knowledge, symmetrically as easily as Bangladesh has done. Many live in private-sector-driven ambits, which loathes at government intervention, but without government intervention, this educational embrace is impossible in the Bangladesh of today

Behind the glows, the routine challenges and obstacles have not dissolved. Automation is becoming a larger part of our national conversation, echoing the paradoxical growth opportunities and closures it brings. A rendezvous must happen, sooner rather than later, between the enormous cultural and religious precepts and practices and secular, in fact, imperious, digital capabilities. Crossing this bridge is a must for overall betterment and stability. And there are rewiring corporations problems: some enterprises still hope low-wage workers can deliver more profits than automated machines can, illogically (but profitably) postponing that transition.

Two other considerations may illustrate why the going will not be easy, and though they carry cultural flavours, it is the institutional context that demands attention: education infrastructure and the typical business mindset modus operandi.

The educational infrastructure here does not address the private-public university division, important though it is, nor too how early must online education be introduced in the learning process, crucial though that determinant may be. What it addresses is far more complex and situated at the upper educational reaches: the ministry-level management of education, at the highest echelon, through the University Grants Commission (UGC). Though the UGC institution has been the bedrock of some major upward threshold movements, it faces a formidable digital challenge, so much so that it may be living its senescence years while leaving its most robust contributions to Bangladesh education. Enhancing pedagogy and promoting, even streamlining, institutional quality assurance cells (IQACs) may have marked its golden years, but the rapidity with which digitalisation is proceeding may be one bridge too far for the cautious, crawling tortoise-like agency to cross. Though it has not significantly fallen behind the proverbial hare, ICT progress is too fast for even our most efficient institutions to keep up with. With slow-moving education, by definition, this is even worse, pushing classroom discourses behind where they ought to be when they should be at the innovative steering-wheel seat. The problem is obvious: how fast do we adopt a game-changing alternative.

Today's education cannot prosper within the same discipline-based paradigm it has hitherto belonged to, not just here in Bangladesh, but right across this universe. Several other countries have changed commensurately. We have not, and cannot because of the institutional bindings. Exemplifying, typical UGC practices require submissions of any pedagogical changes, whether these be in courses or curricula, for approval. When modifications get recommended, the approval time-line extends beyond the digitally viable span. Spending so much time for the bureaucratic acceptance of critically-needed substantive changes weakens the perpetrating institutions and country. There have to be more rapid solutions.

Remedies must address two challenges.  On the one hand, disciplinary boundaries have been evaporating universally, but they remain rigidly intact here in Bangladesh, circumscribing our technological advances. Without quick and more flexible amendments here, the UGC's fate could be imperilled. On the other, the traditional educational approach, based on formal examinations, may also become a fly in the ointment: in the digitalised world, the key mission is rapid problem-solving, not memorising formulas or textual explanations to get a degree or a job, that is, for a career, when the constant upgrading of ICT contraptions requires skills like these even less. Memorisation is the obvious exercise, and the most mis-fitted skill in the digital world. How we bring out individual-specific skills is the key digital motif, breeding the innovative juices the digital revolution has been built upon, and the one at odds with the UGC-centred higher-education fabric here.

Then when the graduate enters the job-market, another widely prevalent cultural pattern intervenes: the mindset of the recruiter remaining too parochial against such tectonic changes. Typically it translates into queries about which university the applicant graduated from, what division his/her results fell in, and obviously, the student's ranking in class. These have not conveyed convincing skill-based information that the ICT domain badly needs. In fact, they have led to many miscalculations and distortions, in turn, preventing optimal outcomes in academic pursuits, and ultimately becoming incompatible with the needs of a digital society. What the digital society needs is agility, independent-mindedness, a higher-threshold of analytical skills, indeed, a mathematical-bent candidate, and so forth, with none of them fitting the UGC expectations adequately to make a mark.

These pose the very challenges for Bangladesh to shift from the ICT passenger-seat to drive its steering-wheel, a challenge well worth taking given how "the story of transformation" may be entering its point of no-return.