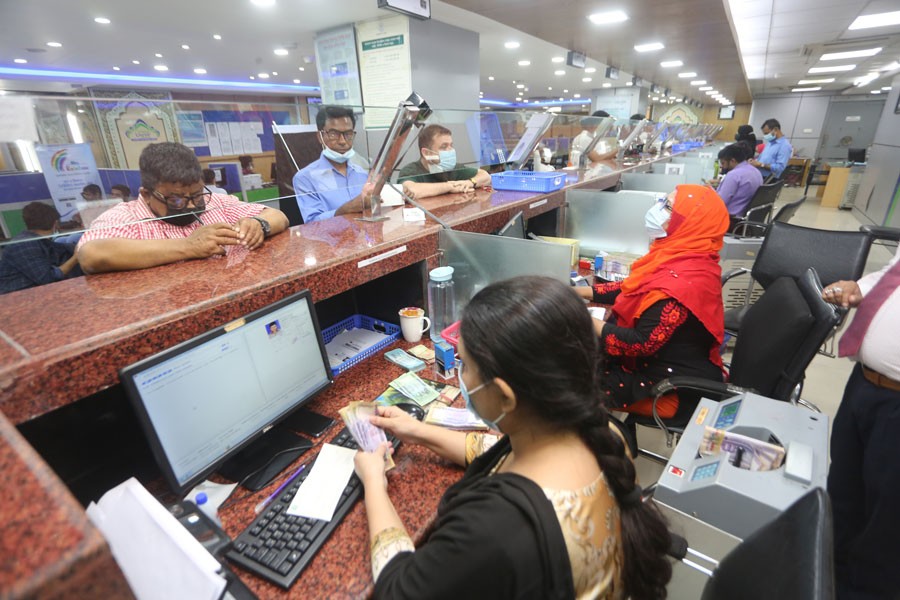 An inside view of a bank branch in Dhaka. —FE File Photo

Until 1990, the lending rate structure of Bangladesh was administered by a mechanism set by the government. So interest rates on deposit and lending were not changed simultaneously with the movement in inflation. Moreover, the government attempted to give incentives to the depositors by raising deposit rate, while lowering the lending rate for investors' interest at the same time. However, after a reform programme in the financial sector initiated in 1990, a new interest rate policy was introduced based on market-oriented interest rate system. Under that policy, banks were allowed to fix their interest rates for both deposit and lending within a range set by the Bangladesh Bank (BB) for different sectors excluding agriculture, small-medium entrepreneurs (SMEs) and export sectors. However, the range was removed by allowing the banks to set their own interest rates effective from February 1997.

As Bangladesh attempts to become the top three fastest growing economies in the world by the next decade, according to 7th Five Year Plan (7FYP), investment must be increased. The Gross Domestic Product (GDP) of Bangladesh has been growing at an average rate of 6.1 per cent with an average gross domestic investment as per cent of GDP of 27.2 per cent during FY11 to FY15. The 7FYP targets average yearly economic growth of 8.25 per cent in FY20 and increase of the average gross domestic investment as a percentage of GDP from 28.9 per cent in FY15 to around 34.4 per cent by FY20. Because of Covid-19 pandemic, the GDP grew by only 5.24 per cent in the FY20 where average gross domestic investment as a percentage of GDP was 31.75 per cent. (According to the revised estimate of GDP on the basis of new base year (2015-16), GDP growth rate stood at 3.45 per cent in FY20 and investment-GDP ratio at 31.31 per cent.) Moreover, data show that the credit growth did not increase that much because of high lending rate in last decade with some exception from FY04 to FY14. As a result, economic growth had been lower than its potentials as investors did not feel encouraged to invest because of the high cost of borrowing. Considering this situation, Bangladesh Bank issued a circular dated February 24, 2020 that the lending interest rate cannot be more than 9 per cent for advance or investment except credit card with effect from April 1, 2020.

It is important to examine which factors are playing determining roles for lending rate in Bangladesh. Setting the lending rate for the banking sector of Bangladesh depends on the cost of fund, demand and competitor's interest rate on deposit. The deposits in different banks are their main source of loanable funds. To attract such deposits, banks need to be generous to the depositors by offering higher deposit rates as well as quicker service. Consequently, banks might adjust the lending rate to lift it faster instantly if interest rates on government bonds and other financial securities increase.

However, banks may not automatically reduce their lending rates immediately based on market rates. Hence, it becomes costly for the customers to turn to a different lender after developing certain business contacts as asymmetric information exists between banks and their customers.

In Bangladesh, the interest on non-bank savings certificates such as National Saving Directorate (NSD) certificates charge a fixed interest rate of 11.28 per cent (with effect from 23.05.15 onward) on saving. As a result, it is very difficult for banks to attract deposits by a deposit rate more than 6 per cent (it was 5.06 per cent in July FY20 and gradually declined to 4.36 per cent in April FY 21), which seems to be  low considering that it only meets the current rate of inflation. The lack of loanable funds at schedule banks will therefore tend to push the lending rate up.

As mentioned above, Bangladesh's scheduled banks have the right to set their lending rates according to their own business interests following BRPD circulars, auctions on government bonds and bills. If interest rates of government bonds and bills increase, the lending rate of commercial banks will also increase. Therefore, if the commercial banks set relatively higher interest rate on lending, there will be the possibility of higher risk of non-performing loans (NPL). Moreover, in most cases, these NPLs cause dual problem of adverse selection and moral hazard, which gives rise to conflicting information where the borrower has more information than the lender.

Considering the importance of lending rate determination, Rouf and Chowdhury (2015) analysed the factors that are liable for high lending rate in Bangladesh and found that deposit rate, excess reserve, consumer price index (CPI) and policy rate significantly affect commercial banks' lending rate. However, they did not analyse the dynamic impact (short and long run) of the determinants on lending rate.

This paper attempts to find the determinants of commercial bank lending rate in Bangladesh considering the dynamic impact (short and long run). Therefore, the objective of the study is to find out the magnitude or related factors that affect the interest rate on lending in Bangladesh. The full working paper with the econometric analyses is available at the central bank's website (www.bb.org.bd). The current article briefly presents the findings and conclusions of the paper.

Macroeconomic indicators such as economic growth, inflation and interest rate reflect how well a country's financial stability is. According to the Keynesian income identity, investment is one of the key elements of GDP. But investment is inversely related to interest rate on lending. If a country has unusual lending rate, investment will be interrupted. Therefore, it is important to keep the lending rate in a suitable condition which means not too high nor too low. Due to persistent high lending rate, Bangladesh Bank sets 9 per cent lending interest rate cap with effective from April 1, 2020 in order to reduce interest rate spread for encouraging investment activities.

POLICY RECOMMENDATIONS: Since higher profitability ratio is one of the factors liable for high lending rate, bank management should think how to reduce profitability for the welfare of the society. It is imperative to strengthen bank governance for improving asset quality because high stock of non-performing loan is a concern in the banking sector. The high ratio of net non-performing loans to total loans reflects financial inefficiency, which should be improved through strengthening the financial intermediaries.

As the net ratio of non-performing loan to total loans increase by 1 percentage point, the lending rate will rise by 0.0614 percentage point in the long-run. Hence, a stable and capable financial institution is required for higher investment. In this connection, Credit Information Bureau (CIB) should be improved to help banks with better assessment of borrowers' credit worthiness. Volume of investment should be increased in the quality of lending. Moreover, it is essential to give power to the bank for taking legal action for NPL or bad loan collections, foreclosures without injecting stay order for loan default from the Supreme Court.

Total volume of saving should be increased by increasing saving rate in order to boost up investment rate.