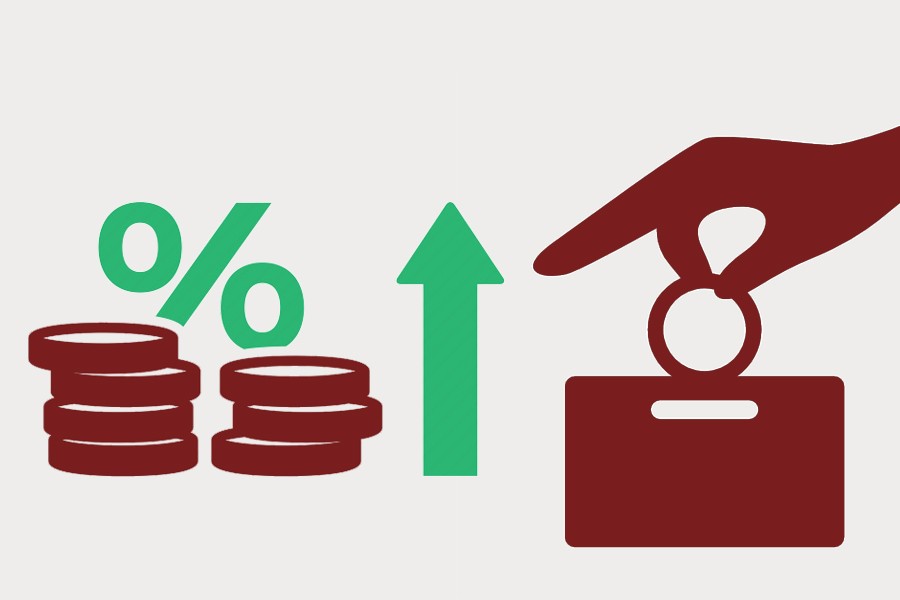 In a move to provide some space for the commercial banks to set their deposit rates at 6.0 per cent, the government has drastically slashed the interest rates on savings schemes in post office. The government has been trying to set a uniform deposit rate at 6.0 per cent to make a 9.0 per cent lending rate for last one year. Banks have also agreed to implement the 'dictated rates' by April this year. By drastically slashing the rates in post office savings schemes, the government tries to give a strong signal to the commercial banks that it is determined to introduce a fixed-rate regime in the country. Nevertheless, the move seems market distorting and also somewhat contrary to welfare approach.

When inflation rate is above 5.50 per cent, setting annual interest rate on three-year cycle of savings scheme at par or below the inflation rate appears to dilute economic rationale to some extent. The new rates will reduce the real income of the depositors significantly. Instead of getting some money in return, they will actually receive less in real term.

For instance, annual average inflation rate was 5.60 per cent in January this year while the point-to-point inflation rate stood at 5.57 per cent in the same month. Now, 5.0 per cent rate of return on the first year of three-year fixed deposit in post office is clearly below the inflation rate. In real term, a depositor will receive Tk 105 for keeping Tk 100 for a year and find that market price of consumer basket increases to Tk 105.60 from Tk 100 a year back. Thus, he or she will actually receive negative return.

It is difficult to understand how deposit rates on savings for ordinary people could be set well below the yield or interest rates of t-bills or t-bonds. Generally these rates are regarded as important bench-mark rates for the banks and financial institutions.  These are also bench-mark rates for other government bonds or debt instruments. Ignoring the bench-mark on cutting the interest rates on post office deposits is a market distorting move.

Interestingly, the government is borrowing from the banking system through t-bills and t-bonds by following the rules of market. That is why yield of these securities increased significantly after June last and also fluctuated. The change in monthly yield over the year indicates that demand-supply mechanism of market works here. To borrow more money within a short span of time, the government has to offer higher rate of return.

Banks and financial institutions are the main investors on treasury bills and bonds, having 70 per cent of total outstanding of these fixed income tradable securities. Thus, these financial institutions are getting competitive return on investment in these securities. Though there is an option for the individuals to invest in treasury bills and bonds through banks, currently share of individual investment is below 0.50 per cent.

It was around two decades ago when International Monetary Fund (IMF) had advised the government to reduce the yield of savings certificates and bring them down near the interest rates of t-bills and t-bonds. The core idea behind the suggestion was to gradually make the rate setting mechanism entirely market-based in the long-run. Since then, more market oriented approach has been introduced gradually.  The current move, however, seemingly detract from the existing market mechanism. Instead of providing  more space to manoeuvre market forces, dictated approach to determine interest rates also indicates that there are some flaws in economic management.