Dealing with the highway anarchy 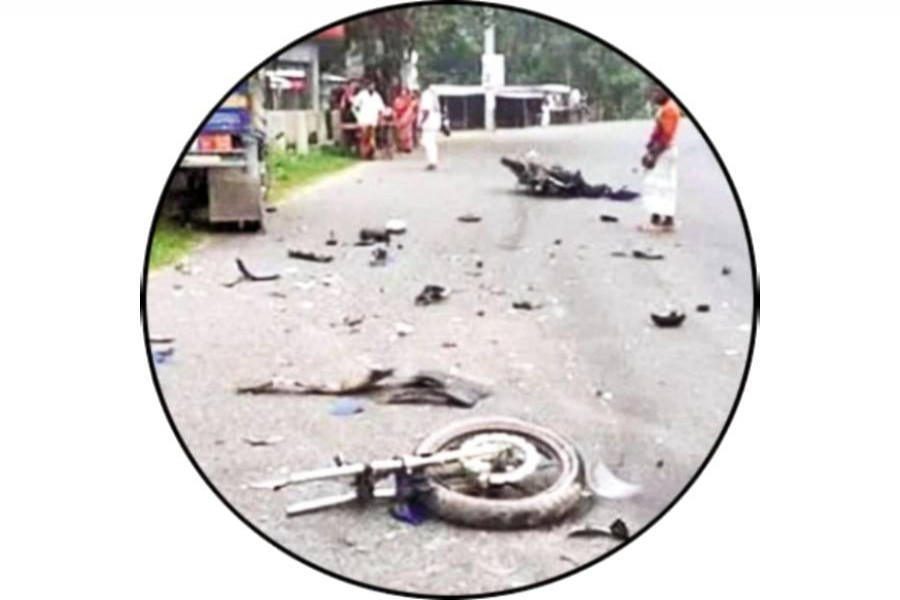 Thanks to the remarkable cut in road accidents prompted by the lengthy corona lockdowns, the absence of bustling roads in Dhaka and elsewhere in the country emerged as a blessing in disguise. The roads in the capital remained off-limits to reckless traffic. The highways didn't have to see repeated fatal accidents like that seen in Dhaka. Given the frequency of accidents involving different types of public and private transports, the grisly nature of the road mishaps and the rising number of casualties, the country's roads earned for themselves a chronic notoriety. With the passing of days, the road accidents in the country continue to take fiercer forms ending, at times, in macabre results. In Bangladesh, people are used to watching extraordinary types of accidents. On occasions, the highway accidents involve three vehicles colliding at a time, instead of the traditional mishaps involving two. Sarcastically speaking, the blood thirst of the Bangladesh roads and highways keeps becoming unquenchable. Moreover, the weirdness of these accidents keeps taking more terrible nature than the previous ones.

Just a couple of months ago, the ordinary people couldn't consider head-on collisions involving more than two vehicles. Perhaps to prove Dhaka highways' unique ferocity, they have gone for grislier mishaps --- involving three vehicles at the minimum. It could be more.To imagine morbidly, the prevailing circumstances might be inviting more motorised or home-made makeshift transports to join the deadly mayhems. Before the inauguration of a multi-lane highway, a number of formal promises are made. Those include round-the-clock patrol by highway police, installation of close-circuit cameras at the roads' accident-prone areas, foot over-bridges around crowded places and many other amenities. Virtually few of these facilities have been in place since the highways' opening.

In the immediate past, recklessly driven minibuses were identified as the main culprits behind terrible road accidents in Dhaka. In years, hundreds of people would die in avoidable accidents in Dhaka. Thanks to the enactment and enforcement of many fresh traffic rules, the frequency of accidents caused by rash driving dropped significantly for a few months, starting from 2018. During the days after the death of two college students under the wheels of a speeding bus, the angry general students came out on streets of the capital in protest. For a total 11 days, protesting students had tried to bring discipline to the Dhaka traffic.

Amazingly, the students' all-out efforts to bring order to the capital's roads proved a success. The on-duty traffic police sergeants extended their cooperation to the students' checking of the running vehicles' papers. The Dhaka commuters and residents hoped the city roads would not revert to their earlier anarchic look. Unfortunately, after remaining in a semblance of discipline and order, lawlessness began creeping into the traffic movement scenario. In barely two years, Dhaka wore its earlier look --- traffic caught in gridlocks and tailbacks and buses in competitions to speed ahead of others to pick passengers. Apparently, the unprecedented students' movement for safe roads had fizzled out with no tangible results. But the protest campaign left a note of caution. It was clear. If there were even the faint signs of the return of the commuters' killings caused by traffic recklessness, Dhaka students would not hesitate to stream into the roads like they did in 2018.

Given the unabated rise in the occurrences of deadly road accidents on the country's highways recently, they are also emerging as the causes of a new headache. But since they cut through the outback rural and semi-rural areas, after causing a disastrous accident, the responsible drivers can flee the scenes. The rural eye-witnesses cannot always chase them successfully. To speak forthrightly, the drivers responsible for dreadful accidents on the national and regional highways can somehow manage to flee the scenes of crime. They could be caught with only the prompt arrival of patrol police teams. These incidents are rare. It means the highway route-using transports remain at the whims of the drivers at steering. The vehicles include heavy trucks, covered vans and large passenger buses and coaches. These transports, like those seen inside cities are often found engaged in the competition of overtaking each other.

A new scourge has lately emerged in the form of improvised transports. They are seen carrying passengers and merchandise, often competing with passenger coaches! The ending often proves fatal.

Prior to these road mishaps, it was the heavy trucks which were held chiefly responsible for the deadly accidents in the capital. At one stage, trucks emerged as the symbols of gory deaths. The defiance of the drivers at one point reached such an extent that the government in the mid-1980s was compelled to ban the plying of trucks during daytime in Dhaka. The rule is still in force amid sporadic violations.

Besides scores of rules and restrictions, the cities in the developed countries are literally free of terrible traffic collisions. Still, police patrols are found making rounds in the cities for 24 hours. Disastrous accidents, however, do occur in these countries' freeways or expressways. The nature of these accidents is blood chilling, mostly ending in instant deaths and mutilations. Being a small country, with a handful of under-construction elevated expressway roads, the country may not have to encounter myriad challenges of highway journeys in the future --- unless they are constructed in multiple numbers of levels or layers. But the scourges of sloppily constructed highways, their wrong use, lack of police supervision etc., are feared to invite bad reputations for the country's road communication sector as a whole.  The construction of the Padma Bridge is, undoubtedly, a great feat. But it will also have to depend on properly functional highways on its two ends.