COP25: Climate crisis has reached the point of no return 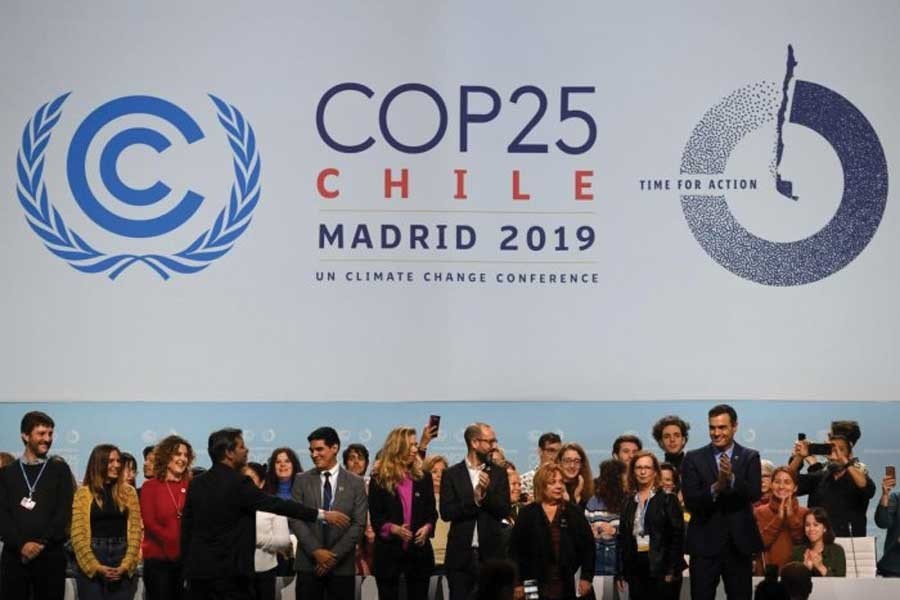 From the Editorial desk:  Our columnist Muhammad Zamir’s write-up on COP25 covers developments in climate negotiations up to Friday, December 13. BBC reports from Madrid on Sunday: “The longest United Nations climate talks on record have finally ended in Madrid with a compromise deal. Exhausted delegates reached agreement on the key question of increasing the global response to curbing carbon. All countries will need to put new climate pledges on the table by the time of the next major conference in Glasgow next year. Divisions over other questions – including carbon markets – were delayed until the next gathering.  After two extra days and nights of negotiations, delegates finally agreed a deal that will see new, improved carbon cutting plans on the table by the time of the Glasgow conference next year.”

At the United Nations climate negotiations in Madrid have re-emerged  old splits between rich polluters and developing nations over who should slash greenhouse gas emissions by how much, and how to pay the trillions needed to live in a climate-addled world.

The specific aim of the Madrid negotiations was to finalise, if possible, the rulebook for the 2015 Paris climate accord, which enjoins nations to limit global temperature rises to "well below" two degrees Celsius. However this effort does not appear to have clearly succeeded. This failure in moving forward was denotated through a comment made by Spain's Minister for Energy and Climate change Teresa Ribera: "There are those that want to move quicker and those that want to hide behind things which aren't working, so as not to advance." The talks however received a shot in the arm on December 13 after the European Union (EU) pledged to make the bloc carbon-neutral by 2050.  Nevertheless, this much-heralded decision was immediately undermined by the refusal of Poland-a major emitter-to sign on.

This meeting in Madrid has however signalled the need to find least common denominators that would have to be agreed upon through frantic 12 months of negotiations that will culminate in Glasgow with COP26 in November 2020.

The seriousness of the existing situation pertaining to climate change, adaptation and mitigation measures was outlined through a comment made by UN Secretary General António Guterres - "the point of no return is no longer over the horizon". Speaking ahead of the meeting the Guterres also underlined that in view of the growing climate crisis the political leaders had to respond urgently. This was reiterated through the comment: "…in the crucial 12 months ahead, it is essential that we secure more ambitious national commitments - particularly from the main emitters - to immediately start reducing greenhouse gas emissions at a pace consistent to reaching carbon neutrality by 2050. We simply have to stop digging and drilling and take advantage of the vast possibilities offered by renewable energy and nature-based solutions".

The world has watched with concern the deleterious effects of climate change over the last two years. We have seen floods, landslides, drought and cyclones affecting countries in Africa, the Carribean, Latin America, Europe, Australia and Asia. Hundreds have been killed and nearly 50 million people in different countries have been affected. This has resulted in destruction of infrastructure, communication network, habitation and also created severe food insecurity.

In this perspective, world attention was drawn to several important reports published about the effects of climate change before and during COP25. It was revealed in the Global Climate Risk Index (CRI) 2020, which analysed data from 1999 to 2018, that Bangladesh is seventh among the 10 countries worst hit by extreme weather. The Report apparently looked at four indicators - death toll, number of events, loss of property and loss of gross domestic product (GDP). According to this survey the total loss suffered between 1999 and 2018 amounted to around US$ 3.54 trillion. The Report also stated that Japan, the Philippines and Germany were the most affected countries last year followed by Madagascar, India and Sri Lanka. In its own way the Report indicated that there is no longer any room for complacency because the intensity and frequency of climate events are becoming unpredictable. It was also clear that all nations need to concentrate on capacity building for the future.

Discussion during the Madrid Conference led to one least common denominator - impacts from extreme weather events will hit the poorest countries hardest as they are particularly vulnerable from different dimensions and also because they not only have a lower coping capacity but also they need more time to rebuild and recover.

The risk index was prepared by using the database of the NatCatSERVICE with the cooperation of the reinsurance company Munich Re and socioeconomic data available with the International Monetary Fund (IMF).

There was another interesting revelation from another source. The Global Carbon Project indicated that CO2 emissions were on course to rise 0.6 per cent this year - relatively slower than expected. However, global carbon emissions have been boosted by soaring natural gas use and this has hit record levels in 2019. This has happened despite a decline in coal consumption.

BANGLADESH CASE: It was a Conference with significant denotations and connotations. Consequently, it was very important that Prime Minister Sheikh Hasina could attend the meeting in Madrid and reiterate her concern and anxiety over the possible after-effects of the evolving climate variability dynamics. She was able to effectively convey to the participants the different dimensions of this issue and how Bangladesh, seriously affected by climate change due to extraneous elements, was trying to overcome the growing challenges.

She asked the global community to take the responsibility for climate migrants as they would be forced to leave their homes and seek new places of habitation for no fault of their own. In this context she correctly mentioned -"as our people will be displaced for no fault of ours...we expect the international community to shoulder the responsibility of accommodating them and providing them with livelihood". She also underlined that all funds to fight climate change must be replenished as per agreement, including the $100 billion annual contribution.

The Prime Minister mentioned that the Paris Agreement recognises the special circumstances and needs of the least developed countries (LDCs) and "Particularly Vulnerable Countries" based on the principle of the "common but differentiated responsibility", and this recognition must be adhered to in every delivery mechanism of the climate finance.

She noted that Bangladesh, a firm believer of collective efforts and understanding to fight climate change believed that the UN is the most appropriate platform for this purpose. She drew the attention of the participants not only to the principle of "Loss and Damage" within this equation but also urged all to agree to this principle featuring prominently in all negotiations. She also mentioned that the Warsaw International Mechanism must be given a much stronger mandate to explore financing losses and damages through its review. Within this paradigm, she warned that there was a limit to resilience and adaptation and every country needed to stop the increase of global temperature at 1.5 degrees Celsius more than the pre-industrial level.

The Prime Minister said that climate change had now become an existential threat for climate vulnerable countries like Bangladesh which was fighting the battle on two fronts - firstly, mitigation measures to reduce and eventually reach zero emission in future and secondly, undertaking implementation of adaptation measures in areas where irreparable damage has taken place.

Bangladesh, Sheikh Hasina pointed out, was the largest delta in the world, and also the worst-affected country because of adverse impacts of climate change. She added "up to 2050 from now, our annual GDP loss will be 2.0 per cent and at this rate by 2100, the loss will be a staggering 9.0 per cent."

Bangladesh is the first LDC to establish a Climate Change Trust Fund by itself and has so far spent more than US$ 415 million from its own resources for mitigation and adaptation purposes. The Prime Minister said, "…we are set to spend as much as US$ 10 billion to make the country less vulnerable to natural disasters." This measure has been undertaken so that vulnerable people are not left with any choice to survive other than resorting to actions that could endanger state, regional and global security and make them easy prey for threats like radicalisation.

Other participants also urged all nations to join their hands to combat climate change to secure the future of children. There was also general consensus that the vulnerable countries suffer the most due to their limited financial capacity to cope with the problem and also because of their specific geographical features. As a result they have to bear the brunt of the damage though they made negligible or no contribution to the menace.

Muhammad Zamir, a former Ambassador, is an analyst specialised in foreign affairs, right to information and good governance