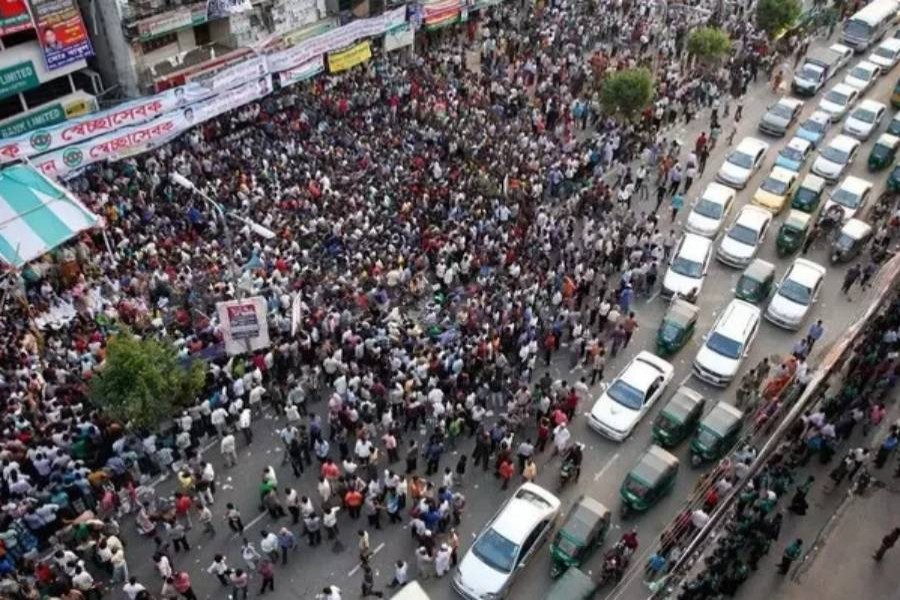 How many people live in the Bangladesh capital couldn't be known as yet from the latest census! Dhaka's two city corporations, according to a 2020 enrolment report, had 5,465,703 voters. If that figure is doubled (to 10.93 million) for reasonably estimating its population by adding under-18 and floating people, that's still half the projected number of 22.47 million as per macro-trend analysis.

Migrant workers and working people who commute from  neighbourhood and adjacent administrative districts, and people visiting the city for official, medical, business and other purposes cant's be counted as city dwellers. An official of the Bangladesh Bureau of Statistics (BBS) -- the enumerating agency -- elucidated this when this author sought to know the details of the census outcome and its methodology.

So, the answer, given by a jobseeker during his viva voce in a television drama in the1980s that the Dhaka city's population was "Mela (quite a lot)", remains valid till date. Thus the city planners won't be able to say soon exactly how many residents in this megacity need foods, lodging and utility and regulatory services.

However, the biggest puzzle of this year's census report is how the national population has stagnated despite a more than 1.0 per cent growth over the decade. The 2022 census' primary data suggests the population at 165,158,616, almost equal to the 2011 figure of 164.4 million.

The population may stand at 170 million in the final report, forecast the BBS official, explaining that there's no legal scope to count non-resident Bangladeshis. Tracking of emigrants at exit and re-entry points, databank of adults having national identity cards, and birth registration and school enrolment could have helped present a clearer picture.

Even if the projected number is taken into account, Bangladesh requires less than 30 million (27,922,500) tonnes of foodgrains a year given a person's average consumption of 450 grams a day. And if the country's annual grain output is truly in a range of 36-38 million tonnes, we have a huge surplus. Then, why are we not a grain exporting country?

Take also the case of the previous fiscal year's gross domestic product (GDP), estimated at US$465 billion and per capita at $2,824 based on the previous census. If our population now rises to 170 million, each citizen would lose $100, though not in real term, fortunately. That growth will raise the rate of unemployment since the number of jobs won't increase through this census.

Authentic data are essential for policymaking and project planning. An underestimate showing the population at 5-7 million lower than the realistic total, may deprive goods manufacturers, service providers, distributors and traders of a huge market opportunity and lead to a crisis that causes more sufferings to consumers.

The recent dollar market volatility, energy sector crisis, price spiral and tensions in the financial sector can't be analysed separately, without accurate data generated today and taken from the past.

When the country has a reserve equivalent to, say, nine months of import bills, another puzzle arises: Why is the budget support from the International Monetary Fund required (to cushion balance of payments deficit)?

Following contradictory statements, it was reported that Dhaka was going to seek US$4.5 billion IMF loan plus $1.0 billion from the World Bank and $700 million from the Asian Development Bank. Already a major recipient of commercial loans including supplier's credit from other sources, Bangladesh shall have to spend billions for debt servicing from 2024 onwards.

However, the future generation of leaders must know how much today's and tomorrow's children would have to repay and why.

In spite of attempts to downplay, the impacts of siphoning off money, costly power sector deals and infrastructure projects, stock market scams, and loan forgery and banking sector mismanagement, are being felt on different fronts. It's high time the country had taken stock of the fallouts of the old moves, mistakes and lapses in order to learn a lesson and tide over the crisis.