River dredging-never without a question! 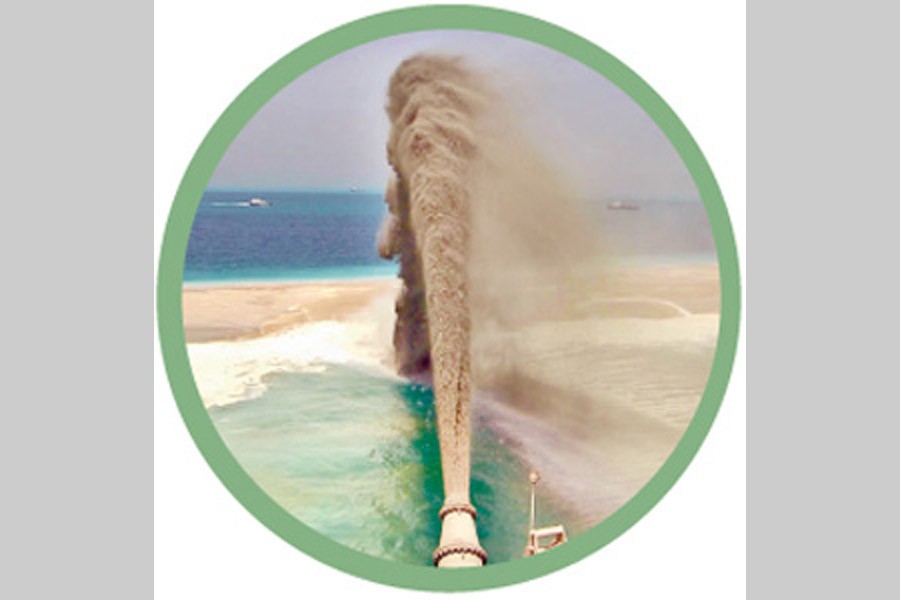 It seems as though river dredging is almost a contentious issue. Hardly ever free from controversaries, this activity, a crucial one to maintain navigability of numerous waterways and also to protect river bank erosion has once again made it top stories in the newspapers. A FE report last week titled 'Major Dredging Project Backfires' speaks of alleged irregularities in a big dredging project currently being executed by the Bangladesh Inland Water Transport Authority (BIWTA). The Tk 9.5 billion project intended to make the Mongla-Pakshi channel of the Padma river navigable for transporting imported heavy machinery for the Rooppur nuclear power plant from Mongla port has reportedly run into snags due mainly to improper methods applied in its implementation.

The Implementation, Monitoring and Evaluation Division (IMED) of the Planning Commission has found the feasibility study of the project faulty. It has also identified a few other major drawbacks including adverse impact on river banks triggering erosion. The work of the consultant is affecting the main purpose of the project, the evaluation report noted. It has been learnt that BIWTA appointed the consultant (CEGIS) through "single source selection" method and selected the Bangladesh Navy directly as the contractor for dredging work.

Earlier, another report on capital dredging in the river Karnaphuli in Chottogram had drawn attention of many, especially as regards the questionable accountability and monitoring methods of the works done. The ministry of shipping has reportedly unearthed gross irregularities in the project for dredging and bank protection of the Karnaphuli undertaken by the Chottogram Port Authority (CPA). Work of the Tk 3.76 billion project began in July, 2011 with the target of completion by January 2013, extended subsequently to December this year. The project aims at dredging nearly two kilometres of the Karnaphuli river bed from Sadarghat jetty, some 500 metres off the 3rd Karnaphuli bridge. Besides, construction of a 2.615-km marine driveway with bank protection and a 400-metre jetty along the left bank of the river from Sadarghat to 2.6-km upstream had also been scheduled.  A committee engaged to investigate into the irregularities has reportedly found that slow pace of work coupled with negligence and lack of accountability and monitoring were the key factors for poor performance and delay in completing the work even after the extension of initial deadline.

In view of the technicalities involved in dredging, one should not be judgmental on the face value of news reports. However, what is important here is that for quite sometime there have been plenty of discussions on streamlining dredging, especially capital and maintenance dredging.

Dredging, believed to be the only solution to bring navigability in water bodies, especially in the river channels, has for long been termed a happy hunting ground for those involved in the under-water activity -- to the misery of the millions. The job while being highly cost-intensive because of the oil-propelled device, is fraught with the burdensome task of monitoring the results in a transparent manner. Although this is an apparent deterrent to achieving desired results, there are times not only in the dry season but occasionally in the rainy season as well when the need for dredging becomes acute in the country. The common practice is gathering up the bottom sediments and disposing of those at different locations. Besides navigability, dredging in Bangladesh becomes necessary to protect coastal erosion through raising embankments alongside river banks.

In a country like Bangladesh where capital and maintenance dredging is required for a number of reasons besides navigability, there is the need to introduce modern technology aimed at gearing up performance level as well as ensuring transparency. Capital and maintenance dredging, over the years, has undergone dynamic improvements worldwide with the introduction of high-tech trailing suction hopper dredgers and the mighty cutter suction dredgers. It has been found that the dredging operations in the country are done mostly by the inland water transport authority (IWTA) under the ministry of shipping, but as has been the case, the job is taken up at times only when an emergency arises. In many cases it has been observed that due to poor quality of work or work not done according to procedures requiring transparency in monitoring, the same job has to be done all over again within a short time. As a result, it has become a repetitive and seasonal activity. In fact, this constitutes the often-alleged main 'problem' with dredging in the country. Clearly a manmade problem grown out of decades of malpractices and incompetence, it must be addressed squarely through maintaining strict accountability.

In order to be able to draw tangible benefit from dredging, it is highly important that the government worked out a policy to facilitate the activity in a systematic and transparent manner. There is also the need to firm up planned activity in case of both capital and maintenance dredging.

Pandemic is not over, so are scams