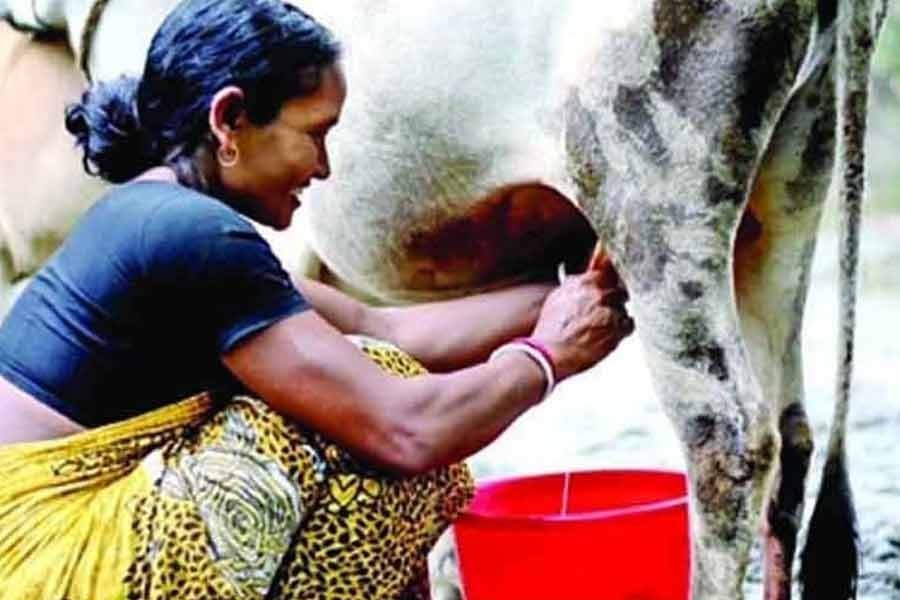 Dairy, no doubt, is one of the most flourishing industries in the country over the past decades. From a very humble beginning with stray efforts here and there in an informal manner, the industry grew to a commendable height thanks to a number of dedicated entrepreneurs backed by large-scale investment and introduction of modern technology. A news story published in the FE a few days ago had highlighted the potential of the expanding dairy industry in Bangladesh, and mentioned the lack of processing as a major hurdle to further expansion. It also mentioned that the country's dairy industry has been struggling to thrive and meet local demand due mainly to poor monitoring of quality control and pricing, and absence of institutional farming.

According to the Department of Livestock Services, milk production in Bangladesh amounted to 119.85 lakh tonnes in the 2020-21 fiscal year against the demand for 152.02 lakh tonnes. The deficit in production is met by bulk imports of milk powder, mainly from Australia, New Zealand, Holland, Denmark and Poland. According to Bangladesh Bank data, the country imported more than one lakh tonnes of milk powder and dairy derivatives spending Tk 2,000 crore in 2021.

Despite the huge demand and growth potential, the development of the industry is impeded by several challenges. The informal segment of the industry is dominated by small-scale farmers and market intermediaries, so quality control processes are apparently non-existent. As a result, the quality of milk is not being ensured.

The overwhelming reliance on imported milk products, particularly milk powder, is ever growing in the absence of processing facilities, and due to, what many think import bias. There can be no arguing that import is the only choice for the domestic market because of high demand, and absence of local processing makes import inevitable.

Many companies in the processing industry, like sweetmeat and ice-cream producers, use imported bulk milk powder for its low cost. According to a survey, the size of Bangladesh's milk market is $2.47 billion which is expected to grow over 5.0 per cent annually in the coming years. However, the fact remains that the country's dairy market is dominated by unprocessed, raw milk, and the processed segment is dominated by imported powder milk. As for other milk products like butter, cheese, yogurt etc, a major portion of the demand is met from import.

Milk is a valuable nutritious food that has a short shelf-life and requires careful handling. It is highly perishable because it is an excellent medium for the growth of microorganisms, particularly bacterial pathogens that can cause spoilage and disease in consumers. Milk processing allows preservation of milk for days, weeks or months and helps reduce food-borne illness.

The usable life of milk can be extended for several days. Of these, pasteurisation is a heat treatment process that extends the usable life of milk and reduces the numbers of possible pathogenic microorganisms to levels at which they do not represent any health hazard. Milk can be processed further to convert it into high-value, concentrated and easily transportable dairy products with long shelf-life, such as butter, cheese and ghee.

While most countries produce their own milk products, the structure of the dairy industry varies in different parts of the world. In major milk-producing countries most milk is distributed through wholesale markets. In Ireland and Australia, for example, farmers' cooperatives own many of the large-scale processors, while in the United States many farmers and processors do business through individual contracts. In developing countries, the past practice of farmers marketing milk in their own neighbourhoods is changing rapidly. Notable developments include considerable foreign investment in the dairy industry and a growing role for dairy cooperatives. Output of milk is growing rapidly in such countries and presents a major source of income growth for many farmers.

As in many other branches of the food industry, dairy processing in the major dairy producing countries has become increasingly concentrated, with fewer but larger and more efficient plants. This is notably the case in the United States, Europe, Australia and New Zealand.

Although in Bangladesh dairy is still a nascent industry operated largely informally, over the years it has experienced considerable change in procuring high milk-yielding cows, introduction of semi-mechanised milking techniques. But the supply chain is far from organised. Since there are only a few processing plants which procure fresh milk from farmers, pricing, albeit low pricing, is often a disheartening aspect affecting them. There are few cooperatives in the northern region of the country, but it is a tough task for them to ensure fair price because of lack of bargaining power.

As the dairy industry in the country is getting more and more organised and modern tech-based farms are also coming up with sizable investments, producing raw milk must not be the only objective. While there will always be demand for raw milk among a section of the consumers, pasteurisation, to start with, can be a viable means to get a better and bigger market. But this has to be done by a third party with big investment. Observers believe that despite the capital intensive nature of investment, prospect for such venture is very bright. Next comes investment in other product areas such as yogurt, butter, cheese etc. The fact is, investing in milk processing has hardly ever figured as a subject of importance in the country-for strange reasons. It is time the dairy industry received the right boost by way of investment in processing?

According to experts, for the industry to grow in a desired manner, the focus should be as broad-based and diverse as to take care of the demand-supply gap.