Poverty and Nobel Prize for Economics 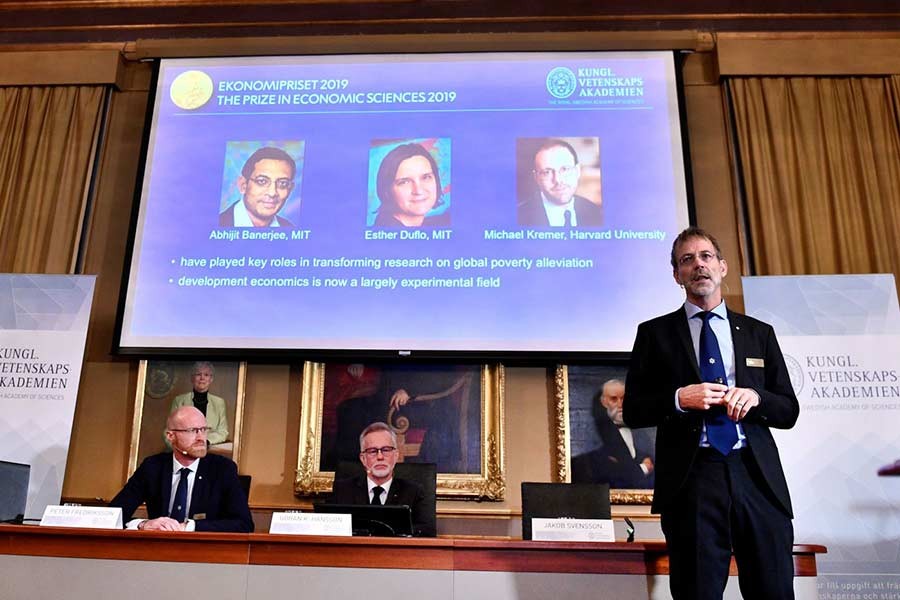 This year's Nobel Prize for Economics went to Abhijit Banerjee, Esther Dufflo (MIT professors in profession and husband and wife in personal life) and Michael Kremmer of the Harvard University.  The win owes to their "experimental approach" to global poverty reduction. The happy news is that some parts of their field works focused on some poverty reduction programmes of Bangladesh. Especially they carried out an in-depth evaluation of BRAC's ultra-poor graduation programme in six countries using Randomized Control Trials (RCT) and concluded that such models are sustainable. They are proud of visiting villages, living there, delving deep into the poverty dynamics and behaviour of the poor to come up with theory of poverty reduction. This stands quite opposite to visiting villages or the poor with a pre-determined theory developed in study rooms.   By and large, it appears that the prize valued the contributions of some of the micro aspects in building macro foundations.

Take the case of Kremmer's famous "O-Ring Theory'. The American satellite Challenger collapsed immediately after it took off. Research later showed that small spare parts of the Challenger, called O-Ring, did not work at a certain temperature which ultimately caused the collapse. Kremmer thus introduced a theory for development economics - for macro development of the country, microeconomic issues need serious attention.

Incidentally, this year's declaration of the Nobel Prize in Economics on 14th October was just three days before the world's observance of the 'International Day for the Eradication of Poverty'.

Perhaps many of us do not know that a particular day of a year has been dedicated to the commitment of eradicating poverty. The 17th October of each year is "The International Day for the Eradication of Poverty". This year the theme was "Acting together to empower children, their families and communities to end poverty." The Sustainable Development Goal (SDG) is poised to "end poverty in all its forms everywhere". This means that poverty is not only a matter of calorie intake or income earned; poverty has multi-dimensional perspectives.

'The International Day for the Eradication of Poverty' has a history that needs to be reckoned. It traces back to 17 October 1987 when over a hundred thousand people gathered at the Trocaderoin Paris, where the Universal Declaration of Human Rights was signed in 1948. The purpose of that gathering was to honour victims of extreme poverty, violence and hunger, and to proclaim that poverty is a violation of human rights. Thereafter, through the resolution 47/196 adopted on 22 December 1992, the UN General Assembly declared 17 October as the International Day for the Eradication of Poverty. It invited all states to take the matter seriously and called for inter-governmental and non-governmental organisations to assist the state with the slogan:  "Building a sustainable future: let us unite to end poverty and discrimination".

Bangladesh has done pretty well in cutting income poverty. The Seventh Five Year Plan (2016-2020) - a document that reflects national hopes and aspirations a least for five years - in its preamble put poverty reduction as one of the perennial goals. Ipso facto, the plan aimed to bring down overall incidence of poverty from about 25 per cent of 2015 to about 19 per cent in 2020, and extreme poverty from about 13 per cent to about 9.0 per cent during the same period of time. This has been possible due to sustainable economic growth Bangladesh achieved in recent decades. But behind this good news, the bad news is that despite cutting extreme poverty from 34 per cent in 2000 to 13 per cent today, 40 million  live under poverty, and  20 million people still groan under extreme poverty - living on lower than 45 taka per day (HIES 2016)!.

Few other factors fuel frustrations farther. For example, consider the distribution of poverty across the country. There are poverty-pockets in northern Bangladesh, in coastal areas and haors where the incidence of poverty is much higher than the national average. For example, in Kurigram  and Dinajpur, the incidence of poverty is reported to be 65-70 per cent as opposed to  nearly 20 per cent now! And in some areas poverty is alleged to have increased during the last decade. Again, the non-income poverty situations of children and mothers are much worse.

The role of government in reducing poverty can hardly be overemphasised. Despite debates, NGOs have contributed with their microfinance programmes. But soon it was realised that the microcredit pogrammes tend to bypass a huge chunk of the ultra-poor, and from then on, targeting ultra-poor became a tool to reduce extreme poverty. Side by side with government's efforts at reaching the hard-core poor, a number of programmes/projects undertaken by different NGOs  are also at work to address especially extreme poor who are  assetless, illiterate, and mostly day labourers consuming only 1,800 calories or less. The ultra-poor is a sub-set of the poor with less than 10 decimals of land, mostly women-headed households with almost no male working member. Historically, this sub-set lived on philanthropic grants or at best serving as maids in other households.

This year's theme, Acting together to empower children, their families and communities to end poverty is a right call for the eradication of poverty as it invites an attention to children and families.   Strengthening community activities would help build social capital that is not less valuable than physical and financial capital as far as poverty reduction is concerned.

Bangladesh government, in its efforts at eradicating extreme poverty has to seriously examine the cross-cuts among the existing interventions. Most importantly, cost-benefit analysis should pave ways for and means to poverty reduction in a country with serious resource constraints. Secondly, government could cooperate with NGOs in the fulfilment of its objectives of drastically reducing extreme poverty. Knowing well that poverty cannot be contained by governments alone, the UN invited all stakeholders to assist the governments to see a state of "moving from humiliation and exclusion to participation: Ending poverty in all its forms".

Abdul Bayes is a former Professor of Economics at Jahangirnagar University and currently an Adjunct Faculty, East West University.