Of Tetultola, of shrinking spaces 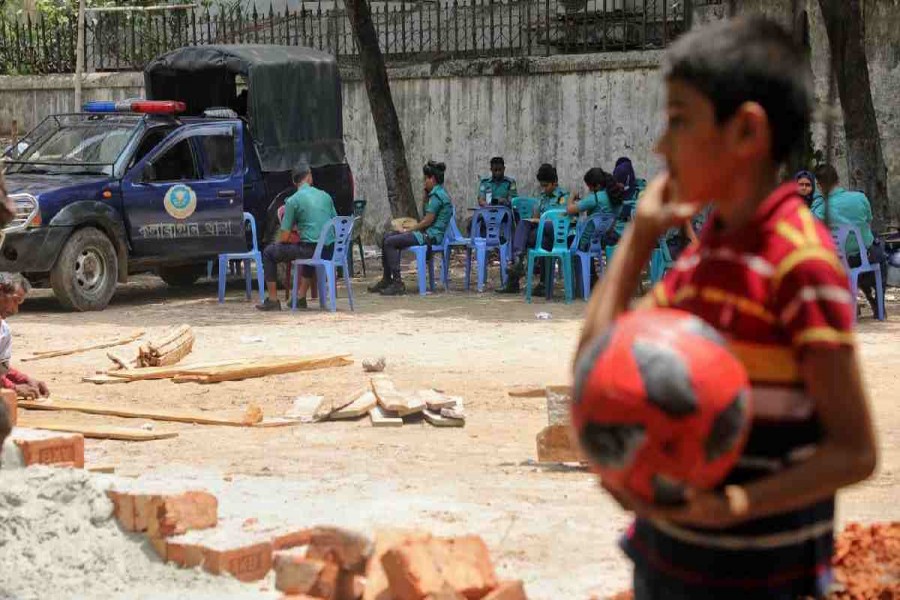 It took the courage of an environmental-cum-cultural activist mother and her teenaged son for us to remember that we have a problem with those who would wield power in indiscriminate fashion. This mother-son team braved all the odds to protest what clearly was a takeover of a playground, called Tetultola, in Kalabagan by the police. In the end, it was the mother and the son who paid the price, the price of being placed under arrest and kept in that condition for thirteen hours at the police station. They have now come back home after furnishing a bond, as the police inform us, promising to desist from any further agitation against the commandeering of the playground.

The circumstances in which Syeda Ratna and her son were dealt with raises the very intriguing question of whether the law permits the arrest of citizens who come forth with a voicing of protests against what they perceive to be an assault on the environment, indeed a clear blow to the rights people are constitutionally expected to enjoy. This park has for decades been the only space for children in the area to play in, for elders to stroll in, for people to feel that there is a sliver of space for them to breathe some fresh air in. Now we are informed that this park will soon be a thing of the past if the law enforcers have their way.

Which raises the spectre of everything we have lost, insofar as open spaces and the environment are concerned, not just in the nation's capital but across the country. The rapidity with which agricultural land has been swallowed by industrial expansion outside Dhaka and elsewhere has pushed our villages into very narrow spheres where the old rural charms older generations grew up partaking of can only be recalled in unmitigated sadness. No rules exist for villages and hamlets to be reassured that their future is safe, that the ages-old sanctity of the countryside will remain undefiled. We now have an assortment of factories, including those owned by foreign car-making firms, dotting our pastoral landscape. Where beauty once touched our villages, it is now semi-urban squalor which lurks in what remains of our rural landscape.

In an era where worries about climate change assail an entire planet, our failure to tackle environment-related issues is often at variance with our loud pledges to come level with the rest of the world in all these efforts to save the world from sliding into bigger disaster. Our forests have been disappearing; government departments have cheerfully been hacking away at trees in the interest of a widening of roads; wildlife has been subjected to human predatory behaviour; and cities which once were home to a plenitude of nature have dwindled into being suffocating urban slums over the past three decades-plus.

Reverting to the question of playgrounds for children, Syeda Ratna and her son were clearly doing what all of us should have done long ago. Indeed, all of us across the city should have descended in multitudes on to the streets to protest the takeover of the Tetultola park. In a way, the mother-son environmental squad have shamed us all. And yet they have rekindled in all good citizens the old sentiments associated with their understanding of the sinister nature of towns and cities in these post-modern times. And here are the facts, those which revive in us the worries which led Syeda Ratna and her child into voicing their protests over Tetultola: over the years, a very large number of parks and open spaces in the nation's capital have been lost to crass commercialism through the construction of housing settlements and buildings of an official nature.

Take a trip around the city. The open spaces we as teenagers played in, the parks we sauntered into are long gone. And if you take a look at schools in Dhaka, apart from a handful, most of these institutions have no playgrounds for their students. And it is not just schools but the ubiquity of private colleges and universities which keeps the young confined to airless rooms the livelong day. Let us not forget too that where there used to be homes, with spacious lawns defining their front spaces, there are now apartment complexes where nature is alien, with not a blossom or a tree serving as a reminder of what used to be. Children inhabiting these apartments all over the city with their families have been deprived of sports because the playgrounds they need have vanished with the passage of time, lost in the growing popular urge to go against aesthetics.

It is against this backdrop that citizens have now come forth in loud protest against the commandeering of the Tetultola playground. The home minister has been in discussions with the mayor; he has suggested that an alternative playground for children be found. That is not the point. The point is what eminent citizens and organisations, notably Bangladesh Poribesh Andolon, Bangladesh Environmental Lawyers Association (BELA), Ain-O-Salish Kendra and Transparency International Bangladesh (TIB) have clearly enunciated on the issue --- that the authorities have the police department locate an alternative place for its Kalabagan office and leave Tetultola playground alone. If democracy and accountability are ideas we believe in, and those in the corridors of power believe in, the voices of citizens should be heard and acted upon on the issue.

The responsibility of government consists in making life easier for citizens. It is never a job for those who govern to push people, especially children, into increasingly shrinking spaces, literally as well as metaphorically. The task for a city mayor is to ensure sunshine and fresh air for those whose welfare he bears responsibility for.

It is never one of keeping silence when citizens emerge from their homes to defend their interests, in the face of apathy from the authorities, when those interests are threatened by men and women wielding the power to speak up for citizens and yet choosing to look the other way.

Tetultola sends out a loud message --- that arbitrary application of power is a misnomer in our times, that when citizens rise in the defence of their common interests, they need not be pounced on and detained. Tetultola is Ratna and her child's cause. On a larger canvas, it is now a cause which all of us consider dear and sacrosanct.