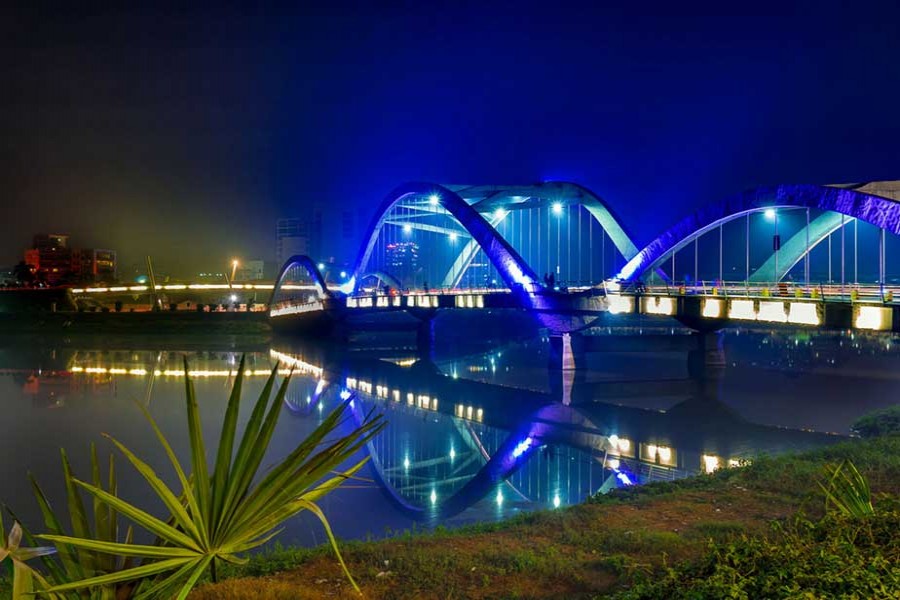 Passionately called the lungs of an ailing Dhaka City, Hatirjheel outwardly looks smart and healthy. But it is so more like those of a cancer patient. Without the best of cares, revival of its health is a distant dream. The latest High Court (HC) ruling may go some way for surgery of its cancerous growths as well as recuperation of failing health. In its full text verdict, the HC has issued four directives and nine recommendations aimed at protecting the original nature, beauty and water of the water body from infringement.

This ruling follows the HC's earlier short verdict delivered on June 30, 2021 on a writ petition submitted by the Human Rights and Peace for Bangladesh (HRPB), challenging the legality of constructions in Hatirjheel-Begunbari project area on September 9, 2018. All constructions including restaurants and shops outside of the layout plan have to be dismantled and no such works could be taken up in future. Then the HC has also issued the ruling for stopping all types of mechanised vessels from plying on the lake's waters.

Of the HC's recommendations, two are likely to have far-reaching impacts. These are: 1) formation of a "Hatirjheel Lake Protection, Development and Management Authority" directly under the prime minister's office; 2) appointment of the Engineering Department of the Bangladesh University of Engineering and Technology (BUET) and the 24th Engineering Construction Brigade of the Bangladesh Army as permanent consultants of the project.

Finally, the recommendation for naming the project after Jagadish Chandra Bose, world-famous scientist with a penchant for the plant life stands out for the sensitivity shown to the memory of the pioneer known for unravelling the mystery of plant kingdom.

These are great measures that can fix many of the problems afflicting the water body. But will those be equal to the task of reviving the quality of water to the level where fish and aquatic lives can prosper unhindered? The water body still receives discharges from households and factories in the surrounding areas as also through the storm sewerage connecting it from the Free School Street side of Kathalbagan. Unless the flows of solid and liquid waste into the jheel can be plugged, there is little hope of improving the quality of water there. Also, dumping of any waste from Kawranbazar refuse has to be made punishable.

Ever since the start of the reclamation of Hatirjheel, a natural water body in the heart of the city, environmentalists and conservationists have their passions stimulated by the prospect of restoring at least some of its lost beauty and breathing space. The Hatirjheel-Begunbari project had put in place a spectacular infrastructural framework. A few of the architectural structures have lent Hatirjheel a touch of engineering marvel and aestheticism.

True, the motley hanging and arched structures with provision for laser light display can transform the entire area into a surreal world of its own but still something was missing from the whole project. This was a lack of greenery. Plantation of ornamental or garden plants under a programme took care of decorative needs on the greenery front. There were some controversies over the choice of some trees of foreign origin. In fact, local floral world is rich enough to meet the diversity of scenic beauty.

Much as this may have been ignored, the project still performed remarkably well. But until the demolition of 15-storey BGMEA headquarters that blocked the Hatirjheel channel, the water body could not get its shape proper and water flows back.

So what proves crucial, as it was before, is to kick-start the process of cleaning the water of the lake to the extent where it becomes transparent like that of its counterparts and rivers flowing through many of the world's big and great cities. In the Netherlands, wild swans and other birds have made a lake their habitat and they float on water without being afraid of people. A conservationist or an environmentalist surely dreams of turning the Hatirjheel lake to one such water body where flocks of roaming fish can be seen through the transparent water and the birds find in it a sanctuary ignoring the busy and noisy city life at a little distance.

However, there is apprehension of non-implementation of the HC verdict. There is the river Buriganga to tell the tragic saga of pollution. Sure enough, that river is also a strong candidate for receiving the authorities' attention. This nation has a lot to learn from some of the European nations which are blessed to have rivers flowing through their capitals and other cities. They religiously maintain the sanctity of their rivers and do not throw even a small piece of paper into water.

When will the citizens here become environmentally sensitive enough not to go on throwing and spitting sprees anywhere and everywhere? Heightened public sense is crucial for maintaining the environment of the surrounding. In this connection, perhaps one example in neighbouring India rather than those in Europe or America, can be inspiring for citizens here. Although Kolkata is as filthy as Dhaka, its underground metro rail was adjudged the cleanest ever in the world for consecutive years. Can we follow suit in case of, at least, Hatirjheel?