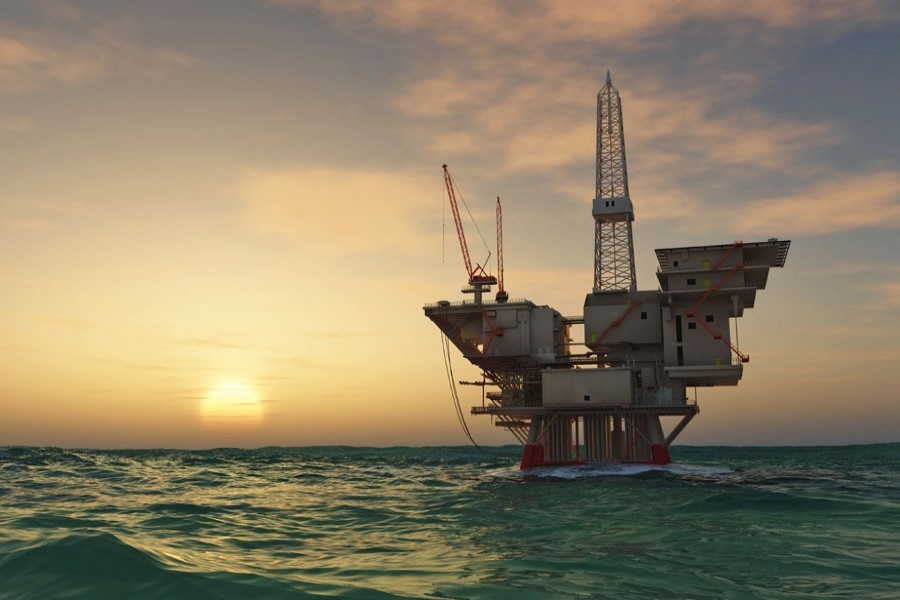 Against the backdrop of no drilling activities in the Bay of Bengal by Bangladesh now, an Indian oil and gas company, ONGC Videsh Ltd, has been given go-ahead to start drilling an exploratory well at Kanchan later this month.

The Indian company will start drilling on behalf of Bangladesh after rescheduling its earlier plan following successful solution of a row over advance income tax and demurrage charges for delays in releasing equipment.

Had the row been resolved earlier, ONGC could have initiated the drilling at Kanchan in shallow sea block SS-04 in October 2019. The Indian firm has planned to drill the well, buoyed by the findings of two-dimensional (2D) seismic surveys.

It may be mentioned here that the drilling in SS-04 by ONGC is mandatory as per a production-sharing contract (PSC) between the consortium of ONGC and Oil India Ltd (OIL) and the state-run Petrobangla and the government of Bangladesh.

ONGC will also have to drill another well in the shallow water block SS-09 by February 2021. Petrobangla signed two PSCs with ONGC, the operator of blocks SS-04 and SS-09 in 2014 which was set to expire in February 2019.

Petrobangla, however, extended the tenure of the contracts by two years to facilitate hydrocarbon exploration by ONGC. Currently, Bangladesh has no producing offshore gas well and the entire natural gas output comes from onshore gas fields and import of liquefied natural gas (LNG).

Any fresh discovery of hydrocarbon in an offshore field is expected to boost the country's future oil and gas reserves.

The current overall natural gas output is 3,175 million cubic feet per day (mmcfd) as of January 08. Of the gas volume, 596 mmcfd is regasified LNG and 2,563 mmcfd local gas.

ONGC will be allowed to operate and sell oil and gas for 20 years from an oil field and 25 years from a gas field. It has already completed around 3,100 line-kilometre 2D seismic surveys for both blocks.

In fact, Bangladesh has apparently failed to make major breakthrough in offshore gas exploration so far after settlement of maritime boundary disputes with Myanmar in March 2012 and with India in July 2014. The country could only award four offshore blocks out of total 22 so far.

After settlement of the disputes with neighbouring Myanmar and India, Bangladesh's total number of gas blocks stood at 48. Of these, there are 22 onshore blocks and 26 offshore blocks. Of these offshore blocks, 11 are shallow blocks while the remaining 15 are deep sea blocks.

Recently, the Prime Minister's energy advisor explained about the government's plan for inviting international bidding for the offshore blocks. In the new round of bidding, according to reports, gas price will remain at $5 per thousand cubic feet (mcf) for shallow water blocks and $6.5 per mcf for deep sea blocks. There will be no provision for allowing gas export for the companies winning the shallow offshore gas blocks while only export provision will remain there for deep sea blocks.

The country is now heavily dependent on onshore fields for gas output, with production hovering around 2,700 mmcfd against a demand for over 3,300 mmcfd. To meet the growing energy demand and depleting onshore energy reserve, the country recently concentrated on exploring oil and gas reserve in the Bay of Bengal.

At the Bay, Bangladesh has 11 blocks for O&G exploration at the India and Myanmar border. Among these, six prospective blocks are at Myanmar border. However, out of these six blocks, only one block was awarded to South Korean Posco Daewoo International Corporation.

The government, in the meantime, is updating the model production sharing contract (Model PSC) to invite a new round of international bidding for oil and gas exploration in the country's offshore blocks later this year. Some changes are being made in the provision to make the offer more attractive for the international oil companies.

One of the major changes is the reduction of mandatory seismic survey period to three years from the existing five years and giving option to the contractor to decide whether it would move further for exploration work. Under the existing Model PSC, a contractor is given five years' time where it has to conduct survey and also drill a well as part of the assignment.

Low price discouraged oil companies from expanding in new territories. The government will hold more offshore block biddings in the next couple of years. Mention may be made that globally offshore blocks account for a third of the hydrocarbon resources. So, the government is focusing more on offshore resources.

The Bay of Bengal remains the least explored area for hydrocarbon potential, so far. The western part (India) and the eastern part (Myanmar) of the Bay have discovered significant natural gas reserves in the past decade. Geological studies suggest that Bangladesh can have significant hydrocarbon resources in the onshore and offshore belts which are yet to be discovered.

How Bangladesh is outperforming India